Yesterday, we talked about the ten second rule, which you can use to protect yourself against impulse buys that are well within the limits of your pocket money. We’re talking about things like a pack of gum, an inexpensive board game, or something like that.

As I know all too well, though, many of the purchases we make are much larger than that one. I’ll give you an example: our blender. 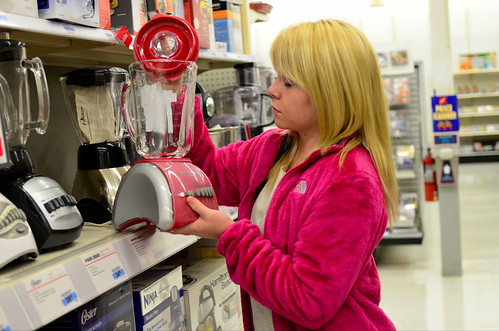 We use our blender for a lot of things: making smoothies, beating eggs, making pesto, and so on. A while back, one of our beautiful children did something incomprehensible to the blender (as children sometimes do), rendering it very difficult to use. You could still use it, but you had to hold something over the top of it while also holding the entire machine firmly in place.

Our initial instinct was to just rush right out and replace the blender with a similar model. It did a decent job, though it would often leave big chunks in the blender and had other little design issues that we didn’t like. It would also take forever to blend certain things.

Instead, we made the decision to buy a better blender.

Now, we could have easily still ran to the store and bought a better blender, but the decision to buy a better one meant that the cost of the blender likely jumped up into the “more than pocket money” category. We weren’t going to just buy a $20 blender.

Instead, we gave it a month. During that month, we researched a lot of blenders. We did some evaluations of what features we actually needed and which ones were superfluous. We settled on a few models and did a ton of price comparisons.

In the end, we wound up with a top-notch blender for far less than we ever expected to pay for it (meaning we did not pay anything close to Amazon’s price for that blender).

That month did a lot of things for us.

We had time to figure out if this was something we really wanted to do. Did we really need a nicer blender? Could we just use a simple replacement for the one we already had? Did we need one at all? These questions are often enough to talk you out of an unnecessary purchase. Try doing this with, say, an iPod Touch, and you’ll find yourself not spending $200 or so on a portable music player.

Obviously, this question didn’t fill all of our thoughts for the month, but it was something that we thought about.

We had time to actually identify the specific item we were looking for. We identified all of the specific features we wanted as well as features we deemed unnecessary. We were able to research a lot of models using tools like Consumer Reports and, eventually, we were able to whittle our choices down to a handful.

We had time to carefully shop for the right item. Instead of just charging ahead once we had an item in mind, we spent some time shopping around for that item – and waiting for the right price. We set up some notifications for prices on the items we were interested in and looked at a lot of different options.

Eventually, the blender we picked up popped up with a large discount, so we pounced.

Give yourself thirty days to go through this process. Most of the time, you’ll talk yourself right out of the purchase, which is a good thing. Even when you don’t, your research and price investigation will often lead you toward getting the best item at a very nice price, rather than just getting whatever item happens to be at your local department store.

You should also set a price threshold for the thirty day rule. What do you consider to be the line between an impulse purchase out of your pocket money and a more significant purchase? For me, it’s usually between $20 and $40, depending on how much of my alloted “pocket money” for the month that I’ve spent. It’s going to be different for each person depending on their income level, behavior level, and other factors.

Loading Disqus Comments ...
Financial
TOOLBOX
Drowning in credit card debt?
Try a Balance Transfer Card
Is your money making money?
Choose a High-Yield Savings Account
Tired of huge interest payments?
Consider Debt Consolidation
Latest from Trent
What Happens If You Live to 100? Here’s How to Manage Longevity Risk in Retirement
What You Need to Know About Online Banks
Is Coasting a Good Retirement Strategy?
Read more from Trent
Featured on: