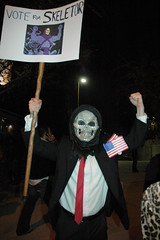 Many entrepreneurs want to be Richard Branson – he’s a billionaire, he’s dashing, and he has influence. What they don’t see is that in the late 1960s, he was selling records out of the trunk of his car at cheap prices. People came to him because he could help them find cheap, good records – not because he had a pile of money.

Many bands want to be The Beatles – they had more influence than pretty much any pop band ever and all of their members are/were fabulously rich. The Beatles had influence and respect first, though – they paid their dues for pennies in the clubs in Hamburg and played for years in obscure little clubs in Liverpool with barely enough money to put food on the table. They became THE BEATLES only after honing their craft for years and building not only a great local following, but good relationships with other bands on the Liverpool scene.

Many writers want to be Nora Roberts – her books are read by millions, she has an adoring fan base, and she brings in $50 million a year in royalties (my “writing hero” is Stephen King, but the same things largely apply to him). What they forget is that she wrote genre romances by the shovel full in the early 1980s for book-churning publishers like Silhouette, slowly building influence but not earning much at all.

What do these examples have in common? They built respect and influence first. Money came later when their influence and respect became clear.

If you’re sitting there worrying about how you’re going to become rich, it’s very likely you’ll never become rich. You might be able to earn a solid living in that area, but true and sustaining riches follow respect and influence, not a great scheme to put cash in your pocket.

So how do you get respect and influence?

Many people tend to take this advice down the wrong path. They’re passionate about golf and thus they get in their minds that if they play obsessively every day, they might be able to get on the PGA Tour. Likely, that’s not true. You have to find a good balance of your passion and your natural talents. Perhaps you can become a golf teacher. Maybe you can become a salesman or an equipment designer for Callaway.

You work diligently at it. This isn’t just a matter of putting in long days of work – although that’s valuable, too. In order to really thrive, you have to practice the finer points of what you’re doing, smoothing them out until they’re perfect.

You find ways to share your work widely. The Beatles played several shows a night until they were ready to pass out from exhaustion. Nora Roberts wrote for a label that didn’t pay her greatly but distributed her work widely. Richard Branson carried his first record store around in the trunk of his car, taking the records to the people who wanted them.

The internet makes this easier than ever before. You can share your work as widely as you wish. However, there’s a new problem – a lot of people are doing the same thing. So how do you stand out? Be better than everyone else. Engage interested people as much as you can. Join in conversations that interest you even if they have nothing to do with what you’re doing (people will find your work if you’re interesting).

You live your life in such a way that you don’t need riches. The less you spend, the less reliant you are on what other people tell you to do. This gives you the freedom you need to actually throw yourself into something where you can build influence and respect.

It’s a lot harder to take a big risk if you need that fat paycheck provided by your employer, after all.

If you dream big, hop on board the train to your dreams. It passes through Frugality, makes a few stops at Passion, Diligence, and Hard Work, and finally finds its way to the twin cities of Respect and Influence – the place where your greatest dreams begin to come true.