Which States Have the Most Financially Responsible People?

During the economic reshuffling occurring during the coronavirus recession, many people are asking themselves whether the professional and personal benefits of living in the most expensive areas of America are really worth it. Many people who are now free to work remotely are considering moving to other areas of the country, where their dollars might stretch further and achieve more financial security.

To answer this question, we need to evaluate what financial responsibility really means, in a way that can be extracted from data sets.

What does financial responsibility mean when comparing states?

Comparing states by cost of living

One way to compare states in terms of the financial responsibility of their citizens is to look at the debt-to-income ratio in that state. In what states did people hold a low proportion of household debt compared to others? Those states would be ones where the population generally avoids and minimizes consumer debt compared to others.  To calculate this, we simply divided household debt by median household income in each state.

[Read: The 5 States Where People Are Missing Mortgage Payments the Most]

States with the lowest debt-to-income ratio

States with the highest debt-to-income ratio

What’s in the middle? The two median states were New York and Connecticut, both at 79%. Both states have a high income level and a high debt level.

States by cost of living

One factor that might skew this information is the cost of living in various states. If a state has a high cost of living, then even if the debt-to-income ratio is good, your dollars won’t go very far.

The lower the number, the easier it is to live in that state, financially. Let’s call this the financial household health index.

The state that performed the best overall in our financial household health index was Oklahoma, with an index of 59.4. Oklahoma was followed by:

Again, the top states were dominated by the Midwest and Great Plains, with a few states from the South popping in as well.

The state that performed the worst overall in our financial household health index was Hawaii, with an index of 183.4. Hawaii’s cost of living is astronomical compared to other states, which carried it to the top here even though it was down the list in terms of debt-to-income ratio.

The states among the worst in terms of financial household health index were mostly coastal states.

Is it time to move?

These numbers indicate that in a very general sense, if you want to live in communities where people are more likely to be financially responsible than average, strongly consider the Midwest and Great Plains, with the South as a third option.

That doesn’t mean this should be the only metric by which you choose where to live, but only a useful thing to consider while choosing a place to settle for the long term.

You will obviously want to seek out places to live that match up well with other things you value. Look for areas that suit your lifestyle, your climate preferences and general culture needs.

[Related: Is Now the Right Time to Get a Mortgage?]

While these numbers paint only a broad picture of the financial conditions of households in the state, you will encounter financially responsible people all over the country. These statistics only point to an overall broad trend in that you’re likely to find it easier to find friends and a community that acts in a financially responsible pattern in some areas rather than others.

In a very broad sense, public statistics seem to show that there are greater tendencies toward personal financial responsibility in the average household in the Midwest than in other parts of the country. If you’re looking for communities where you might find more like-minded financially responsible people, consider looking for communities in those areas that also meet your other needs. 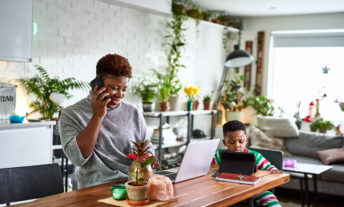