Talk About Your Money, Especially with Your Partner (9/365)

For the first two years of our marriage, Sarah and I barely spoke to each other about money. We’d touch base with each other just enough to make sure the bills were paid, and that’s about all.

“Honey, did you drop off the rent check?” “I took care of the bills for this month.” “Do you have your wallet handy to cover the bill?”

Comments like these were the extent of our communication about money. We just trusted that the other person had their money under control and never really bothered to investigate it further.

Is it really any surprise that our finances bottomed out? 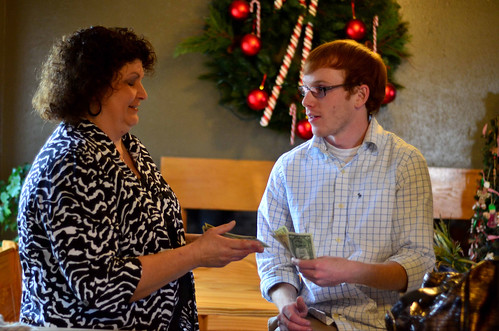 It was from that initial conversation – and many more that followed it – that a cohesive plan for our finances came together. We came up with a plan that suited us for buying a house (do everything we could to save for a down payment until a second child forced our hand and forced us out of our tiny apartment). We came up with a joint plan for retirement.

We started talking about other life goals in a much more concrete fashion, too. We planned carefully for a second and, later, a third child. We agreed that I should devote a significant amount of spare time to writing (although The Simple Dollar took us completely by surprise).

In short, we constructed the scaffolding of the life we have built together. All it took was a conversation about money to get things going.

What did it take to get the ball started? It took one of us (me) to simply get the ball rolling. The biggest key was that I assigned no blame for the situation we were in. Any blame that was out there, I placed directly on my own shoulders, even if I felt it was a shared blame. If you start out a discussion like this with accusations, you’re not going to get very far.

Another key element was to stick with numbers. When we talked about money, we didn’t say things like “I think we can afford it.” We got out our checking account balance and our bills and started calculating to see if we really could afford it.

The final essential element was honesty. I had not really revealed the extent of our credit card debt to Sarah, as I had been “taking care” of that bill for a year. When it was all laid out there, she was upset for a while, but then it became clear to both of us that if we have all of the cards out there on the table and are being fully honest, we can actually solve this problem together.

There’s another key element to all of this. Money talks aren’t just useful with your partner. There is a lot of benefit to talking financial issues over with trusted friends, close family members, and other people around you. You don’t ever have to reveal your full financial picture, but talking about the challenges of debt reduction, great frugality ideas, and other such issues can be a great way to not only learn new ideas, but to relieve the burden of dealing with such issues through conversation.

I have quite a few people that I talk to about various aspects of our financial life. I have a small business friend who often discusses taxes and tax opportunities with me. I often trade frugality tips with various friends and family members. I have another friend with which I’ve discussed retirement planning many times. All of these people have proven invaluable in getting my finances in better shape. Each of them started very tentatively (mostly because I was uncomfortable talking about it), but each grew into a valuable series of conversations for all parties involved.

If you’re dealing with money challenges, don’t bottle them up inside of you. Conversation about them lets you relieve some stress, plus it often opens the road to solutions to those problems. That’s a double win.

Loading Disqus Comments ...
Financial
TOOLBOX
Drowning in credit card debt?
Try a Balance Transfer Card
Is your money making money?
Choose a High-Yield Savings Account
Tired of huge interest payments?
Consider Debt Consolidation
Latest from Trent
What to Do When the Novelty of Frugality Wears Off
Buying the Best, or Just Good Enough?
How to Maximize a 0% Balance Transfer Offer
Read more from Trent
Featured on: