The Gap Is More Important Than Anything (At First)

Quite a few of the letters in the reader mailbag boil down to figuring out which of two or three options is the highest priority. People will want to compare investing options to paying down their mortgage or whether they should have an emergency fund or pay off a credit card.

The reality is that the actual financial difference between these options – for many people – is pretty small.

Let’s say a person is going to build up an emergency fund first, then pay off their credit cards. If that person has $5,000 in credit card debt at 20%, let’s say they wait six months to start paying off their card while they build up a $3,000 emergency fund, then pay down that debt at a rate of $500 per month. That person will pay $875 in interest. On the other hand, let’s say a person starts paying down immediately, but has to stop making payments six times because of emergencies (once every two months). That person will pay $700 in interest. That’s a difference of $125 over the course of 15 months. It’s really hard to say how accurate that number is, of course, because it entirely depends on the emergencies that happen – more emergencies can quickly eliminate that $125.

On the other hand, let’s say that person chooses not to eat out twice a month over those months, saving $15 each time. That adds up to $450 over the course of 15 months.

Let’s say another person is trying to decide between an extra mortgage payment or investing $100 a month. Let’s say their mortgage is at 5% and they can invest over the long haul at 7%. After five years, the investment – if it actually matches that long-term average, which it may not – will earn them $1,500 more with that added risk. That’s $25 per month with significant risk and is a best case scenario. It also excludes taxes on those gains, which will eat up most of that difference.

On the other hand, let’s say a person switches to a more cost-efficient mobile plan, saving them $25 a month with no risk whatsoever.

Here’s the reality of the situation. If you’re just getting started on your personal finance journey, meaning you still have significant debts and don’t have significant investments, improving your “gap” is the best thing you can possibly do. It almost always trumps decisions like how to invest small amounts of money or short-term housing decisions.

What do I mean by “improving your gap”? Here’s my crude illustration of “the gap” from my “business cards” post. 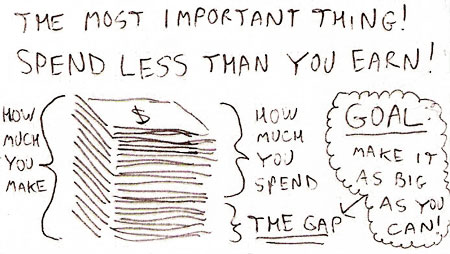 In other words, the “gap” is the difference between how much you earn and how much you spend. You can obviously improve your gap by either earning more or spending less.

Generally, spending less is more immediately accessible to most people, but it also has limits. There are lots of ways to cut spending in your life, but some of them are going to be uncomfortable and eventually you’re going to burn through all of the easy things you can cut, meaning you have to move on to more unusual tactics or start cutting things you don’t want to cut. Neither one is a real road to financial success – I encourage people to only cut the things that they don’t really care about. (Cutting back on spending has another advantage – every dollar you “earn back” from spending less is tax-free.)

Earning more has no cap at all, but it’s harder. It requires you to either find additional work or earn more pay at your current job. Neither path is an easy one, but they’re both quite useful in enlarging your “gap.”

Every action you take that improves your gap – even a little bit – is incredibly important when you’re first making a financial turnaround, before you have a lot of savings in the bank. The larger your gap, the faster you’re going to be able to pay off your debts, period. The larger your gap, the faster you’ll be able to save for a down payment, period.

At the same time, worrying about financial decisions has relatively small impact. The choice between socking away $100 a month in a Roth IRA or a savings account will mean only a few dollars per year for the first few years. It should not be the focus of your energies at the start.

At the start, though? You’re better off maximizing that gap and then using that money to get rid of your debts. If you start to save, don’t stress out about the “perfect” choice – use that energy to simply figure out how to save a little more each month (or put a little more toward your debt). When all of your high interest debts are gone and you’re able to save a significant amount each month, that’s when you should devote significant energy to the “best” investment.