The Most Efficient, Science-Based Way to Learn and Memorize Practically Anything

For the first 28 years of my life, I thought there was only one way to memorize information: brute force repetition. If my schooling taught me anything, it was that the way to do well on tests was to make detailed notes and then read them until your eyes bled.

This style of learning is effective, but only to a point. As we all know, information that was crammed is soon lost.

Much of this forgetting is normal and healthy. Our brains are like computer hard drives with limited storage capacity. There isn’t a need for most of us to remember every capital city in Africa (something I actually had to do freshman year of high school — thanks, Mrs. Heukrodt). Letting go of information is a natural and important process.

But, what about stuff we genuinely care about remembering? What if we need to quickly learn new skills in order to keep up in the workplace? That’s a tall order facing millions of people in today’s ever changing, technologically driven work landscape. When confronting such a challenge, it’s crucial to know the most effective ways to learn.

I found a system that clicked for me when I stumbled upon spaced repetition learning. This system, developed over 100 years ago, was once thought to be the panacea for all struggling students. While it never quite caught on the way researchers hoped it would, it is still used by millions as a way to learn without cramming. Now, thanks to modern technology, there has been a renewed interest in spaced repetition learning.

Let’s take a look at how the system works, and see how the average person can harness its power.

Spaced repetition learning is a system built around the existence of the “forgetting curve,” which refers to how long we can retain a piece of information.

Immediately after learning something, we have almost total recall. Unfortunately, as we all know, it’s a quick downward slope from there. After an hour we remember a bit less. Two hours, less. Two days? Much, much less. This somewhat depressing chart illustrates just how powerful the effect is: 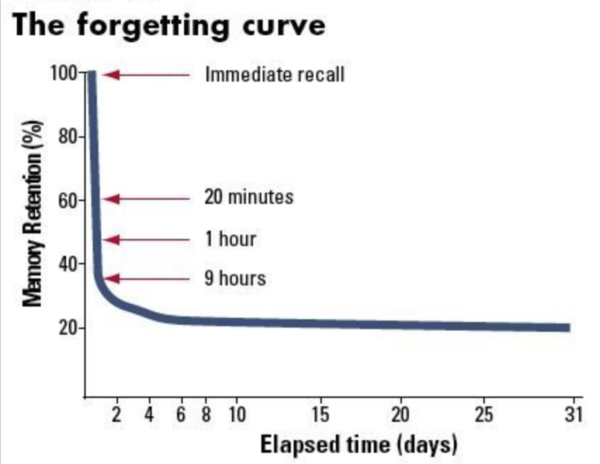 Spaced repetition learning tackles this problem head on. It taps into the proven psychological principle of the spacing effect, which states that we remember things better when we learn the information in intervals over a longer period of time, as opposed to cramming it in all at once.

When the spacing effect is combined with knowledge of the forgetting curve, magic happens. That’s because we remember things longer when we’re exposed to the ideas just as we were about to forget them.

Using spaced repetition learning and spreading your study sessions out – in shorter intervals over a longer time frame – can cut the overall time it takes to learn new foreign language words in half.

This incredible effect has held up whether you’re trying to learn a language, memorize body parts while in medical school, study philosophy, and everything in between. It just works. No one is sure what exact mechanism makes it so effective, but it could have something to do with the particular way in which spaced repetition learning promotes neurogenesis.

How to Practice Spaced Repetition Learning

Although I have a tendency to rant against modern technology, there’s no denying it’s caused a revolution in spaced repetition learning. Smartphone and desktop apps, such as Anki and Mnemosyne, help us leverage a a memorization tool we started using in grade school: flash cards.

Apps like Anki allow you to create your own, customizable flash cards. If I were learning about investing, a sample card for me might read: “When interest rates rise, bond prices tend to ____,” on the front. On the back, it would say “fall.” There is no limit to the complexity you can come up with, and you can even draw or insert your own images, if you’re more of a visual learner.

The fun begins when you start reviewing your deck. I like to steal study time on my morning commute. I take out my phone, open the app, and I’m presented with a flash card. After answering, I must select from three buttons: “Again,” “good,” or “easy.” These selections determine when I’ll next be asked to study that card. If I can easily answer a question, I won’t see it again for days. If it’s hard, I’ll see it much sooner, usually within minutes. The timing and frequency of when you see each card is built into the algorithm, which takes out any guesswork or calculations for the user.

The algorithmic spacing is key, as the app is tapping directly into the forgetting curve. Science has shown that there is a perfect time to practice what you’ve learned. You don’t want to be exposed to concepts too soon, as that would be inefficient. But, if you’re exposed too late, you’ll have already forgotten the concept.

Spaced repetition learning apps help you thread that needle, presenting you with just the information you need to study at the exact right time. As long as the app can tell what you’re struggling with and what you’re mastering, it will present flashcards at just the right time.

The fun thing about learning in this way is that you can build any sort of flash card deck you want. My Anki deck has things like foreign words I want to learn, famous quotes I’d like to commit to memory, and historical facts. It’s a repository for anything I deem interesting and worthy of remembering. The simplicity, and the fact that it’s all stored in my pocket, makes me more likely to actually study.

It’s also convenient that these free apps give you access to hundreds of user-generated flash card decks. These “packs” are voted on by other users, so their quality has been vetted. If you find one that interests you, it can be downloaded in seconds and you can be on your way to becoming a memorization ninja. Success stories on the internet are numerous, with coders finding it particularly helpful for learning new concepts.

Spaced repetition learning is effective, engaging, and easy to use. If I had known about it in college, it would have made my life a lot easier. However, I think it’s important to note that this style of learning isn’t a magic bullet. It still takes diligence and commitment.

That being said, I find it comforting to know that when I really want to remember something, I have access to a tool that’s scientifically proven to be effective.

How To Avoid Early Debt When You’re Young

How To Calculate Net Worth

Got That New Job? 6 Financial Steps To Take Immediately