up front spending, quite a few people mentioned their anecdotes about buying a cheap washing machine and having it last for many years – and then used that as a justification to ignore reliability data when making a purchase and instead go for the cheap item.

Let’s explore that idea a bit. Take a look at this picture: 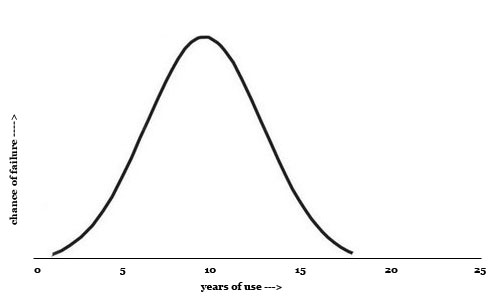 This represents the reliability of a hypothetical low-end washing machine over time. It has an average lifespan of ten years – and most of those models fail at around the ten year mark.

But there are exceptions to that general trend, of course. Some of them fail quite quickly – and this, being a cheap machine, doesn’t have good warranty support. Others last for a long time, even up to twenty years or more.

When you buy a machine, it’s going to wind up at some point on this curve. Most likely, it’ll be one of the ones in that big hump in the middle, lasting ten years or so like the average machine. However, there’s a chance that it might junk out in three years, or it might last you for twenty years. 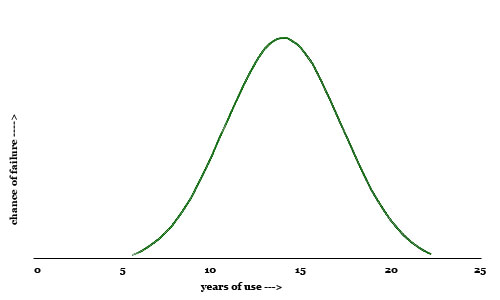 It comes with a good warranty, so there are no failures within the first five years. Overall, the average failure comes in at about the fourteen year mark – and some will last for twenty five years or more.

Obviously, when you look at Consumer Reports or other such research, this second washing machine would have a higher reliability grade than the first one. People (like me) are willing to pay a bit more to get a reliability curve that looks like this one than like the first one. 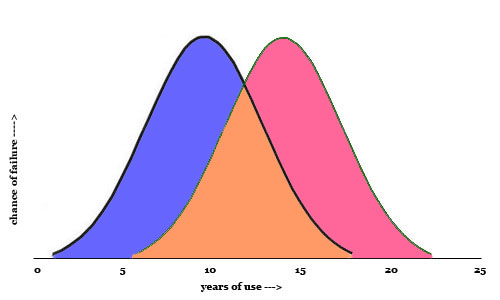 Notice the three colored spaces? They each tell a different story, and their relative sizes are really important.

The blue area shows how likely it is that the cheap machine will fail before the expensive machine does.

The pink area shows something very similar: how likely it is that the expensive machine will last longer than the cheap machine.

To put it simply, you can combine the blue and pink areas – combined, they show the likelihood that the more expensive and reliable machine will outlast the cheaper and less reliable machine. There’s about a 70% chance of that.

Of course, there’s that orange area. That represents the chance that the cheap machine will actually last longer than the expensive machine. In this example, there’s roughly a 30% chance of that happening.

Let’s put it in terms of comments about low-end washing machines. Yes, you’ll hear occasionally from an individual that bought a $200 machine in 1987 that’s still running today. That person lucked out – they bought a cheap machine, but it happened to wind up in that orange area.

However, most of the time, the machine will be a blue one. It will fail before a higher-reliability machine ever will.

Similarly, someone might complain about the “supposedly highly reliable” machine they bought in 2001 that’s already failed. Again, it’s an orange case. Most of the time, that machine will be a pink one.

If you hear about one or two cases, pure chance might give you a few tales straight out of the orange area – exceptional cases, whether or not it’s a good exceptional case or a bad one.

What matters is a lot of cases combined together

When you make a major purchase, you’re betting on reliability

You don’t know exactly how it’s going to turn out. Good reliability data simply means that the machine is likely to be more reliable than a machine with poor reliability data.

Given that a more reliable machine means less time investment (you don’t have to deal with time lost to a broken machine, nor do you have to deal with repairmen) and less money investment (the cost of repairs plus the cost of having to buy a replacement sooner than expected), paying extra for reliability is a bet I’m willing to take. I’m quite willing to pay a 50% premium to buy the machine with the pink curve than the one with the blue curve.