Imagine, if you will, that it’s Friday morning. (This shouldn’t be too much of a stretch for some of you, considering that this post is first appearing on a Friday morning.) After work today, you’re going to spend a really fun weekend doing things that you enjoy with people whose company you enjoy. You can imagine whatever kind of weekend you want, but don’t make it over-the-top extravagant. Just make it really fun without spending thousands of dollars.

Now, imagine that, for this weekend, you’re going to be living out of a healthy-sized backpack and a duffel bag. Everything you need for this amazing weekend needs to fit in those two bags. You’re going to need enough to last through the full weekend as well as get yourself ready for work on Monday.

What are you going to pack in those two bags?

Take that question seriously for a few moments and give it some real thought. What would you pack for this kind of weekend?

I’d pack a couple of pairs of blue jeans, some nice dress pants, a couple of t-shirts, a pair of nice dress shirts, underwear, socks, and an extra pair of dressier shoes to pair with the sneakers I’m wearing. I’d also pack a jacket in case the weather turned. If I had some extra space, I might pack an additional t-shirt and perhaps an additional dress shirt. I really don’t need a giant wardrobe.

I’d pack my laptop and my Kindle and chargers for both of those things as well as a charger for my phone. I’d probably also include my tablet computer to be on the safe side. I’d also pack a good set of headphones.

I’d probably stick in a few of my favorite smaller board games: a chess set, a deck of cards, a small box of other card games, and maybe a single longer strategic board game like Age of Steam.

I’d include a couple of my writing journals and a handful of pens. I’d also toss in a few blank pocket notebooks, because I always seem to run out of those.

I’d jam my favorite pillow into the duffel bag.

I’d include my Synthroid prescription and probably some Fisherman’s Friend cough drops, as well as some snack bars and a water bottle.

I’d make sure to remember my travel toiletry bag, which contains some soap, some shampoo/conditioner, some deodorant, a razor, a toothbrush, some floss, and some toothpaste.

After that… you know, I really can’t think of anything else I might include. Almost everything fun I might do would be taken care of with the stuff in those two bags.

Again, what exactly would you include in your two bags? My guess is your list would have some significant overlap with my own… but not perfect overlap. You’d probably include a few items that cater to your own personal interests and drop the items that cater to my interests, but the very basics, like toiletries and basic clothes, would be pretty similar.

So, here’s the interesting question: What exactly is keeping me – or keeping you – from living out of those two bags? What else do you or I need in addition to those things besides minimal living space?

Think about it seriously for a second. What else do you really need?

The thing is, there’s a lot of sense in living with just two bags. Having just that stuff and nothing else carries with it a lot of time and money freedom. 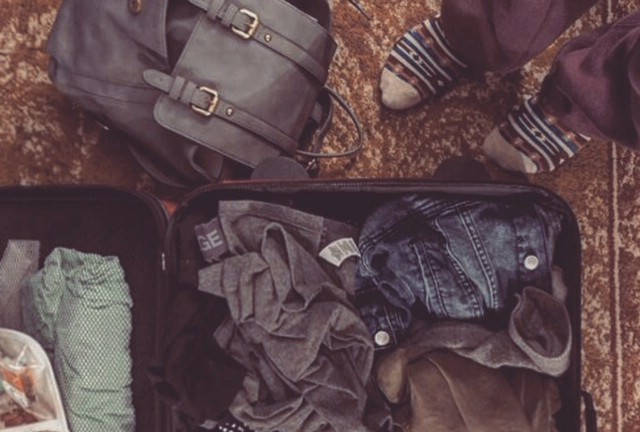 You would have far lower bills. For one, you’d need only the most minimal of living space, with a bed and a place to prepare food and maybe a chair and a table. You wouldn’t really need much more than that, which means that your rent (or mortgage), your property taxes, your insurance, and your utility bills would be a pittance.

You would have an abundance of time. With a small place to live and a relatively small handful of possessions, your time spent on cleaning and maintenance would become quite small. This would give you an abundance of free time to follow your interests and passions.

You’d have far less reason to buy much of anything beyond basic essentials such as food. Why shop? You don’t really need much stuff at all.

Pretty much any financial goal you have in your life becomes well within reach because your expenses are so low.

Yet, behind all of that, you actually have everything you need to live a deeply joyful and fulfilled life. Those two bags contain everything you need for a spectacular weekend, and you don’t need much more than that to maintain yourself throughout the week.

Many people respond to this type of example by saying, “Oh, I can’t do that…” To that, I ask why not? Why can’t you do that?

Are you worried about what other people might think of you? Honestly, it shouldn’t matter.

There’s a simple argument that can be made about why you should not worry even a little bit about negative pushback against positive changes you make in your life.

The truth is that the vast majority of people you meet won’t have any idea that you live minimally. Of those that do, the vast majority won’t care one little bit – it’s not even going to register on their radar. Of the small group of people left over, most of them are actually going to be positive about it, either because they find the idea appealing themselves or because they’re genuinely supportive of you.

That leaves you with a pretty tiny group of people that might have a negative response. You can probably count those people on one hand. Out of the hundreds of people you know that won’t care or will react positively toward your changes, don’t you think it’s silly to have your choices driven in any way by the handful of people who might react negatively?

You should never, ever allow the negative opinions of a few steer you away from your own positive choices. Ever.

Perhaps you simply can’t imagine living without all of your stuff. That’s fine, but the question really becomes how often do you actually use your stuff? If you’re not using your stuff that often, then why do you have it at all? Why do you pay for space to store stuff that you basically never use?

Not too long ago, I heard a podcast episode – I’m not sure which one it was, sorry – that described an experiment that a person did in which he took all of his possessions and put them in boxes in his living room. Over the next few months, as he needed items, he pulled them out of the boxes. After six months or so, he just got rid of everything that was in the boxes. Period.

The argument there, of course, is that anything that you don’t use for six months has no reason to be in your home. It takes up space, requires you to have a bigger home to store it all, takes time to deal with, and is effectively just money sitting on your shelf since you could sell that item and invest the proceeds. Not only that, if you did discover later on that you needed a particular item, you could still reacquire (or borrow) it.

The “two bag” argument is a pretty powerful argument for downsizing your possessions drastically. Even if that seems beyond the pale for you, it at least makes a case for moderate downsizing and being smart about future purchases.

In the end, it still comes down to one key thing: if you can have an amazing weekend and be ready for your workweek with the content of two bags, what do you really need with more? Use that mental approach with everything that you buy and everything that you choose to keep for only the vaguest of reasons.