Are You Insuring the Irreplaceable? 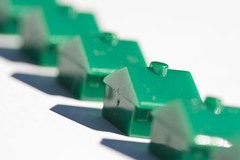 A few weeks ago, I decided to spend a few hours looking carefully at all of our insurance policies. I knew in general how most of them worked, but in many cases I was a little fuzzy (or more than a little fuzzy) on the specifics.

As I studied our homeowner’s insurance policy, I was surprised at how high the value of the insurance was for replacing home contents. It was one of those little things that threw up a red flag for me, and it kind of stuck in the back of my mind.

About a week later, I was still thinking about that number, so I took a very careful inventory of our home’s contents, adding up how much these items would cost to replace – and sure enough, the cash value of everything in the home was only about 40% of the amount we were insuring. Reducing that number would surely save us a significant amount on our policy, so I was about to call up and start discussing things with our insurers when my wife popped in.

She was curious as to how much value I was putting down for some of our most valuable personal items, like some of the handmade wooden artwork her grandmother made, a painting done by my great grandmother, and some mementos from our wedding.

I went through the list I’d made and rattled off a few prices, which were estimations of what they’d cost to replace with similar items. My wife shook her head and told me, flat out, that I was drastically shortchanging the items.

But was I? This has been a big question for discussion around here for a while, actually.

My wife’s position initially was that such items have a very, very high value. She propositioned it this way: how much would I accept in payment for that painting by my great grandmother? The price would have to be very high – and I don’t think I’d sell it at any price.

That’s the conclusion that many people come to when they consider insuring the property in their home. They look at those irreplaceable and personally valuable items and think about how much they’d feel was an appropriate price to let go of something so valuable. Quite often, that price is insanely inflated – but for good reason. The item has a great deal of personal value.

But consider this: would you be able to replace that item if it were destroyed? Would you even think about replacing it?

My grandmother’s painting is invaluable to me. I can’t even realistically name a price that I would sell it for. But if it were destroyed in a disaster, I wouldn’t even think of replacing it. I’d have my memories of it, and I’d probably lament that it was missing, but how could I possibly replace it?

In our new home, I would probably put up a print on the wall, or possibly an original painting by another artist, but neither one would come close to the value that I personally ascribe to my grandmother’s painting.

This gets back to the original question: how much should my grandmother’s painting be insured for? Considering that it’s not something I would ever be able to replace – nor would I really attempt to – I’d argue that it shouldn’t be insured for much at all.

Now, that’s not to say that there isn’t a good argument for insuring on the high side of what you own. You’re far better off having a little bit of breathing room than cutting your insurance down to the bone.

But when you consider the value of the property in your home, think carefully. Ask yourself whether you’re insuring the value that you personally ascribe to things – or the real value of replacing things that you would actually replace. You might just find that you’re over-insuring your contents just because of your own personal feelings – and that’s a financial leak you can easily plug.