Driving with caution and planning for potential hazards ahead does more than just help you stay safe – it  can help fuel be used more efficiently as well. Fuel efficiency describes an engine’s rate of obtaining and using energy from fuel. This is an important process to understand as efficient driving techniques can help extend the life of a car’s gas tank, save money on gas and reduce the vehicle’s impact on the environment. Our guide to fuel efficiency breaks down what drivers need to know about this energy-saving method of driving in all conditions (no matter how dangerous the state roads might be), and how to calculate the most efficient speed for their car.

Driving at 55-60 mph is typically the most fuel efficient, depending on the type of vehicle and how quickly the speed is reached. Larger trucks and vans have a fuel efficiency speed of around 30-40 mph.

Since a car’s mileage decreases after reaching its optimum speed, quick acceleration and braking should be limited when possible. Fuel efficiency can drop by as much as 20-40% from even slight differences in speed, using up a large amount of fuel in comparison to the action at hand. 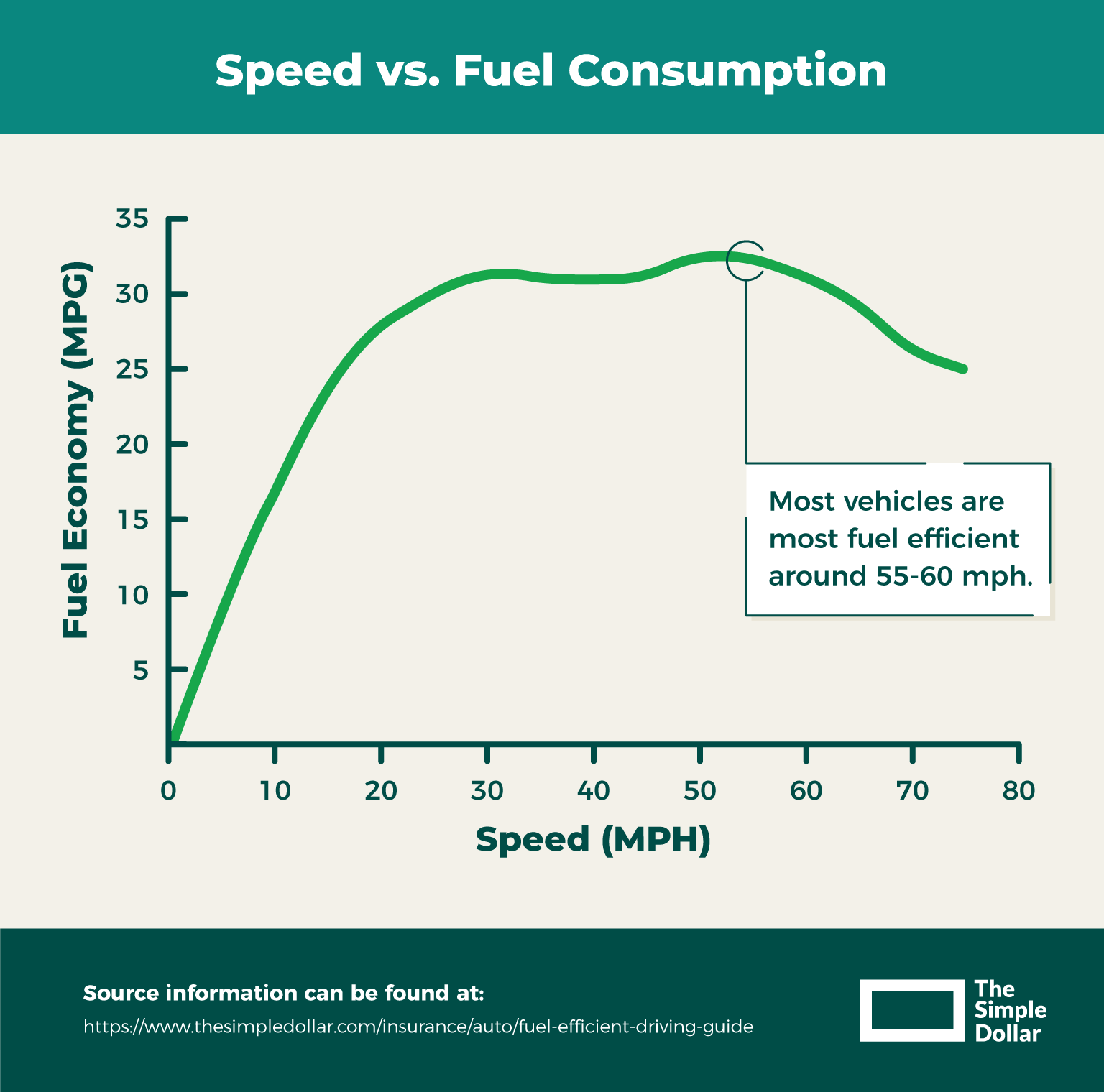 By reducing fuel consumption and using the inertia already created by the vehicles motion, drivers can improve gas mileage and spend less time filling up the tank. Hypermiling, a term for driving in a way that reduces fuel consumption, has gained traction in recent years as a system to put in place to reduce effort on the engine and save money. There are a variety of ways to become a hypermiler, including reducing exterior drag and coasting to a stop.

1. Coast to start and stop

While slamming on the brakes is sometimes unavoidable, one of the main suggestions for hypermiling is to anticipate when braking is needed on the current route. By letting off the gas and allowing the vehicle to slow down naturally, drivers can ensure there is no unnecessary strain put on their brakes and reduce their fuel usage. Then, when braking is needed, pressure should slowly be applied to bring down the car’s speed without causing a hard stop.

The same practice can be applied when accelerating from a stop. By slowly working up to the desired speed, rather than increasing it at a rapid rate, motorists of any kind of vehicle can help their engine use fuel in a refined way. Coasting also helps avoid potential accidents and hazards, as there is more reaction time allotted as the focus is placed on anticipating what’s ahead.

According to the U.S. Department of Energy, under-inflated tires can lower gas mileage on a standard vehicle by .2% for every loss of one psi. This means that, depending on the severity of air pressure depletion, fuel efficiency can be raised by .6–3% from a quick stop at the air pump. To make sure all four tires stay properly inflated, it’s important to use a tire pressure gauge monthly, as some tires can look fully inflated when they are not.

How should you make sure you’re using the right tire pressure? The Department of Energy recommends following the guidelines placed inside the drivers door, rather than what is printed on the tire itself. This helps to make sure that the tire pressure accounts for the weight of the specific model rather than following a standardized number.

Idling for a few minutes before stepping out of the car or while waiting on a friend might seem harmless, but it’s actually detrimental to the environment as well as the gas tank. The old saying that it takes more energy to start the car than to idle is no longer accurate, as innovations in technology have allowed cars to start with little to no fuel use at all. However, idle fuel consumption rates vary by vehicle type and size, with bigger sedans using over a quart of gas per hour spent idling.

Since the average American spends around 16 minutes a day idling, cutting the engine as much as possible can mean big savings at the gas station. However, it’s important to note that not every circumstance warrants shutting off the engine. While stopped at a red light or in bumper-to-bumper traffic, killing the engine is not recommended as it can cause further congestion. Exceptions to this rule include newer vehicles with an automatic shutoff system in place when the car comes to a stop.

Outside of the monetary benefits, reducing time spent idling can help cut greenhouse gas emissions. Those 10 minutes of idling as mentioned above not only use up more gas, but also emit up to one pound of carbon dioxide. Limiting idling times as much as possible can not only help reduce the effects of climate change, but it can also improve air quality as well.

4. Keep in mind what uses fuel

The AC and heater use up a good amount of fuel, especially when the system is programmed to not recycle previously treated air. Recycling this new air and keeping the windows up when traveling at high speeds (or when the weather is extreme) can help take pressure off the heating and cooling system and requires less energy. When driving at slower speeds, however, the windows can be opened to allow outside air to circulate without adding drag.

Drag, an opposing force such as airflow that reduces a vehicle’s performance, is a major contributor to reduced fuel efficiency when traveling at high speeds. Open windows and sunroofs can cause drag by allowing outside air to enter the car and slow its speed. Other accessories such as roof racks and external storage create more mass and a less aerodynamic shape, contributing to drag and reduced efficiency.

A full trunk or towed item can also cause gas mileage to take a hit, as the engine requires more energy to speed up and slow down a heavier load. While the impact is less than storing these items on the outside of the car, if fuel efficiency is the goal, it’s best to reduce weight in the trunk as much as possible. 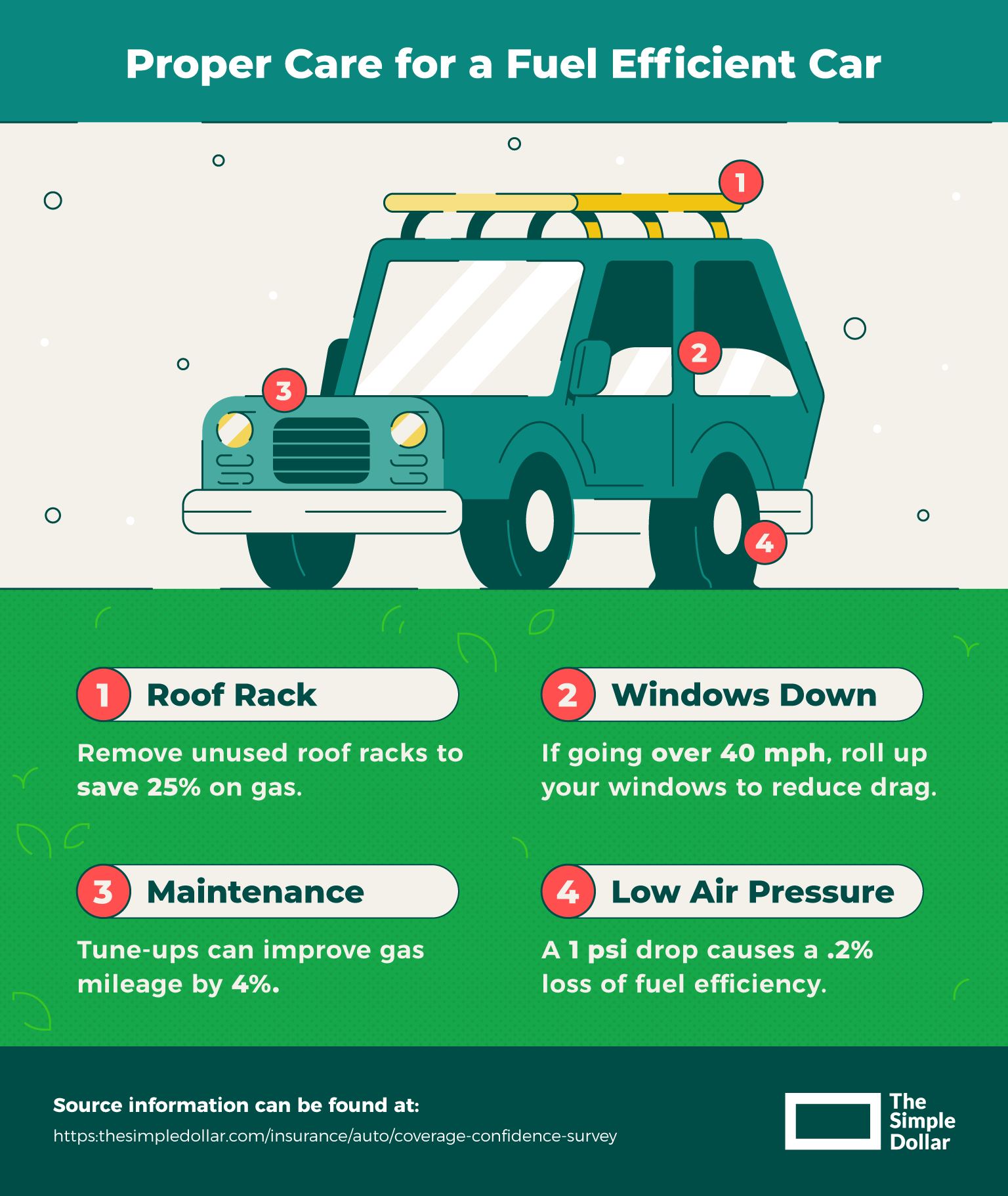 Shift optimization in manual cars can greatly increase the vehicle’s ability to function effectively as well as reduce the amount of fuel used. Get into top gear as quickly and smoothly as possible to help in this effort, as higher gears should match up with higher RPMs. Shift optimization holds a variety of other benefits as well, such as a longer engine life and reduced wear.

In addition to coasting more frequently, taking on a slower speed in all situations is encouraged as it utilizes less fuel and provides greater control over the car in dangerous or unknown situations. The Department of Energy estimates that every 5 mph driven above 50 mph equates to a $0.18 increase in the cost of a gallon of gas. Following required speed limits and keeping a consistent pace not only prevents traffic violations, but will also allow for a smoother ride. Cruise control can come in handy in these situations, but coasting also helps to improve speed variations where cruise control is not an option (such a windy or hilly roads).

Following proper maintenance according to the manufacturer’s instructions improves the life of the vehicle and how much fuel it needs to run properly. Outside of keeping the tires filled, regularly scheduled oil changes and air filter replacements are easy updates anyone can make the help reduce the car’s emission and keep it running in optimum condition for longer.

8. Shop around for gas

With the aid of technology, it’s no longer a pain to drive around town looking for the cheapest gas. Apps like GasBuddy and Waze offer real-time nearby prices, so drivers don’t have to waste gas searching for the best deal (just make sure to turn the car off when searching). Prices can vary by around a quarter a gallon in some places, so a quick u-turn or detour means big savings for those driving larger trucks or SUVs. Gas prices between states can also vary significantly, making a quick trip across state lines sometimes worth it.

How to make a hybrid car more fuel efficient

Any of the above tips can be applied to hybrid cars as well, making an already fuel efficient car even more efficient. Hybrid cars have a slightly lower maximum speed for efficiency than their gas-powered counterparts, with gas mileage dropping significantly when going above 50 mph. But to further the energy efforts, there are a few additional tactics hybrid drivers can implement on their daily commutes.

In many eco-friendly models, braking actually recharges the battery, so slow and steady braking should be used whenever possible to increase the battery’s lifespan from a single charge. Hard braking, much like with traditional vehicles, uses up energy fuel as the forward trajectory of the car acts in opposition when trying to slow down. As with all vehicles, limiting accessory usage and following the manufacturer’s instructions will also aid in optimizing fuel and energy efficiency.

To determine any vehicle’s fuel efficiency manually, first, the MPG needs to be calculated. Start by filling up the tank all the way. The mileage (mA) should be recorded immediately after filling, and then the car should be driven as normal until almost empty. When filling up the next time, record how many gallons it takes to fill up the tank (G) and note the new mileage number (mB). Then, insert the numbers into the formula below to estimate MPG. 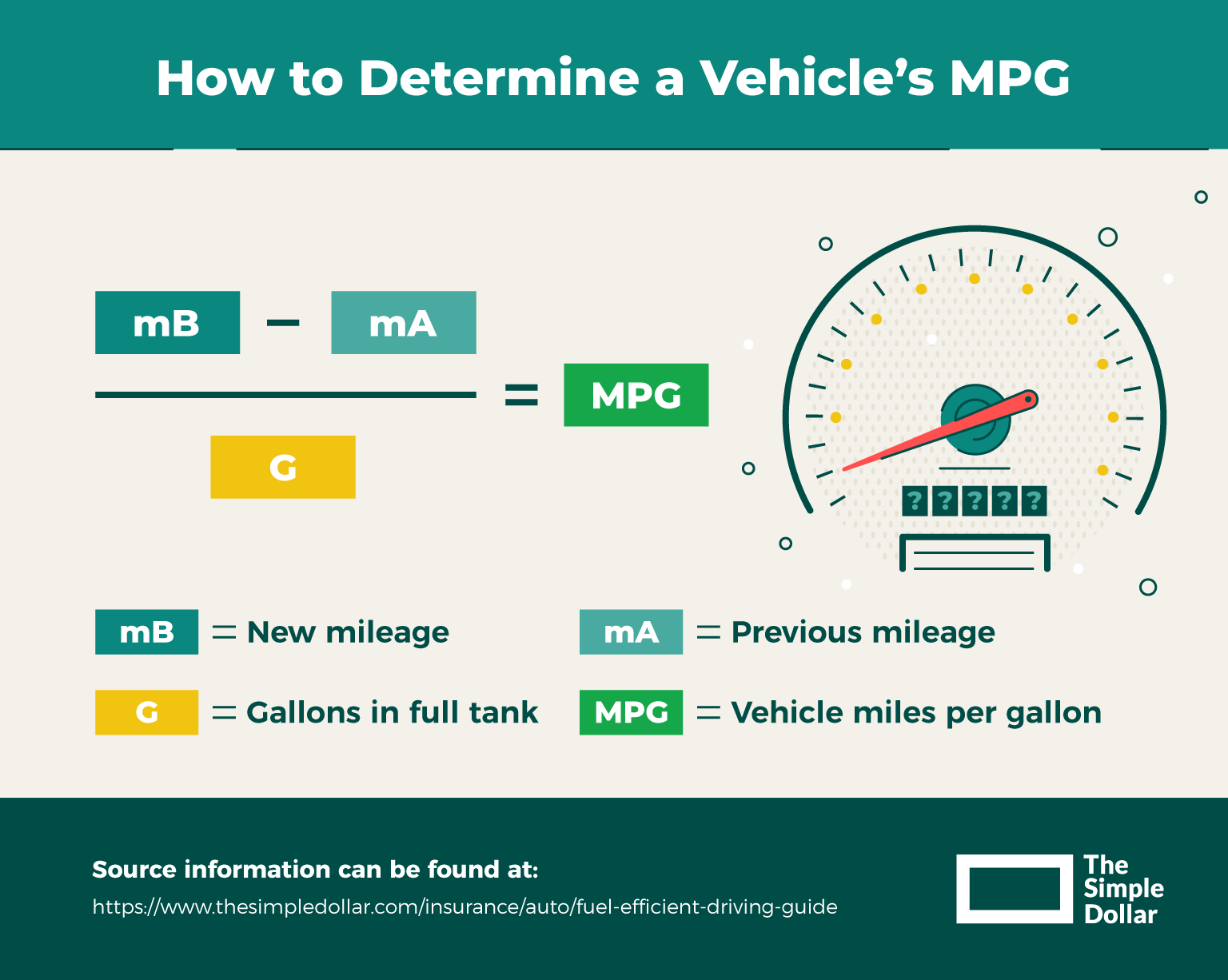 The DOE also has a list of MPG by vehicle to help drivers find their specific make and model information. Once the MPG has been estimated, drivers can use it to determine:

Source information can be found at:

Understanding fuel efficiency is beneficial to anyone looking to better comprehend the value of their car, become more eco-conscious and save money. But it is only one piece of the puzzle when it comes to fully protecting and maintaining their car. By following these fuel-efficient driving tips, searching for cheap gas, obtaining proper auto insurance and regularly cleaning out their car, drivers can ensure their vehicle will last for years to come.