[Study] The Most Dangerous States to Drive

In 2017, there were more than 6.4 million car accidents in the United States.

Accidents happen every day. The causes linked to fatal accidents include speeding, driving under the influence of alcohol and other controlled substances, distracted driving, bad weather, decreased visibility of nighttime driving, and more.

Depending on the external factors in your state, you may want to consider purchasing additional auto insurance coverage.

10 States Where You Should Statistically Buy More Auto Insurance Coverage

Taking factors such as rates of grand theft auto, annual precipitation, auto fatalities and drunk driving arrests into consideration, we calculated a score that indicates how risky it is to own and insure a car in every state. The higher the score, the more likely you are to need auto insurance.

In this study, we found the top ten states you should consider having full auto insurance coverage:

Alaska had the highest score, largely due to its high rate of grand theft auto cases. If you live in Alaska, you’ll definitely want to use our free tool for comparing the best auto insurance rates. 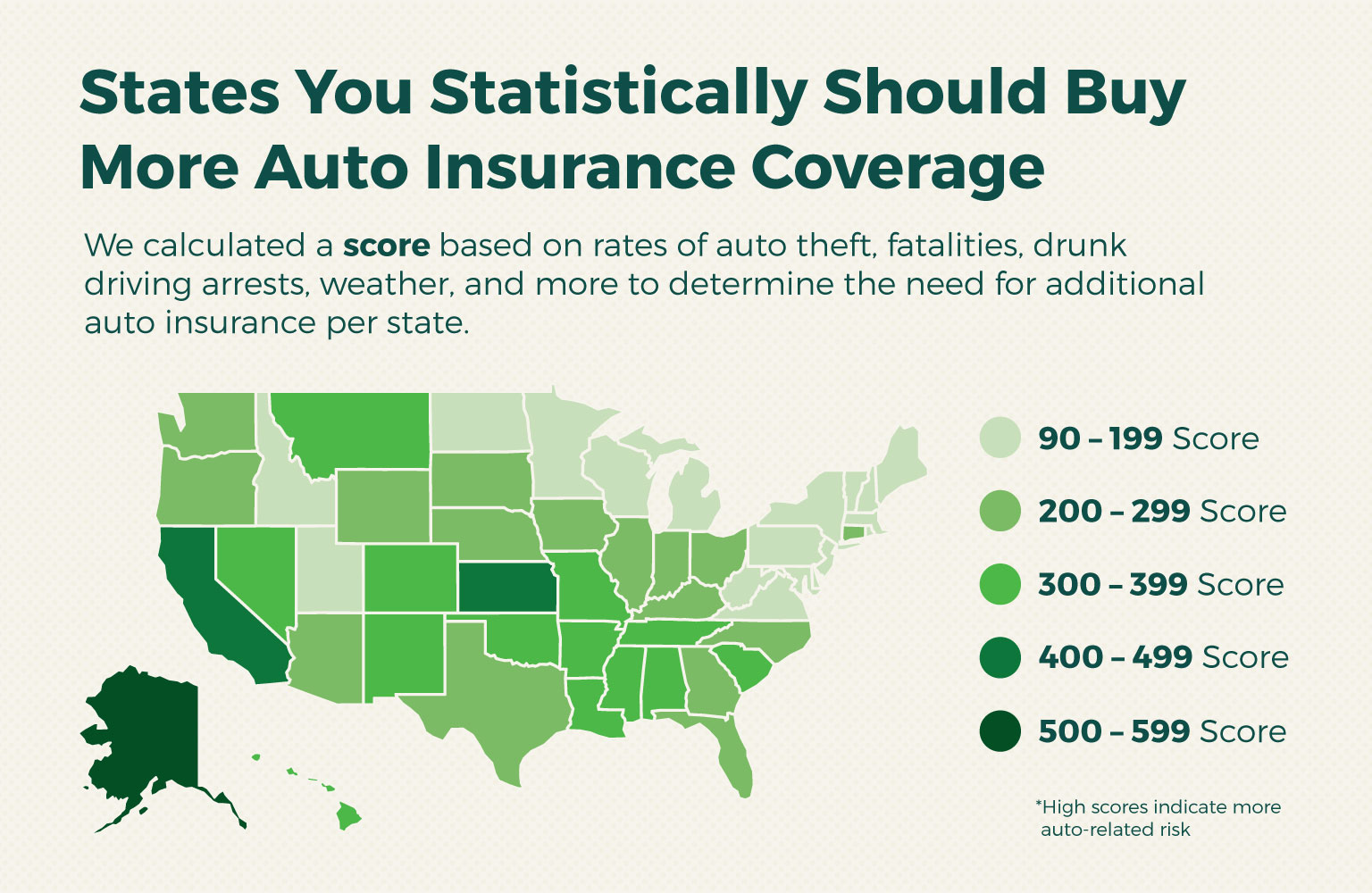 Some states have less rainfall, fewer auto fatalities per capita, fewer cases of grand theft auto, and fewer DUI arrests, which lowers your chances of needing insurance but will never completely remove the need for auto insurance.

Even in Maine, the state with the lowest score in our study, there were 172 car crash fatalities and 5,835 DUI arrests in 2017, 383 cars stolen in 2018, and more than 40 inches of rainfall annually. These conditions make even the safest state in our study dangerous for you to drive in.

If you are uninsured or underinsured in your state, consider using our tool to compare affordable car insurance rates within your area.

The State of Auto Insurance in the United States

As of 2015, there were an estimated 263 million registered motor vehicles. But in that same year, there were less than 203 million auto insurance policies. It is estimated that 13% of the U.S. population is driving without insurance.

It’s an unfortunate reality that nearly 1 in 8 drivers in the U.S. are uninsured, but this has led many to consider adding uninsured motorist coverage to their auto insurance policies. The disappointing part about uninsured and underinsured coverage is that we need to subsidize the 13% of Americans who do not have adequate (or any) auto insurance, but what’s perhaps worse than the reality of being hit by an uninsured driver, is being hit by a car thief.

States With the Most Grand Theft Auto

Of these 900,000+ cars stolen, more than 54% of them were stolen within ten states. Although you may argue many of these states also have large populations, these ten states only make up 46% of the U.S. population.

The top 3 states with the most stolen cars are:

However, when you consider cars stolen per capita, Delaware, West Virginia, and Wisconsin top the list. 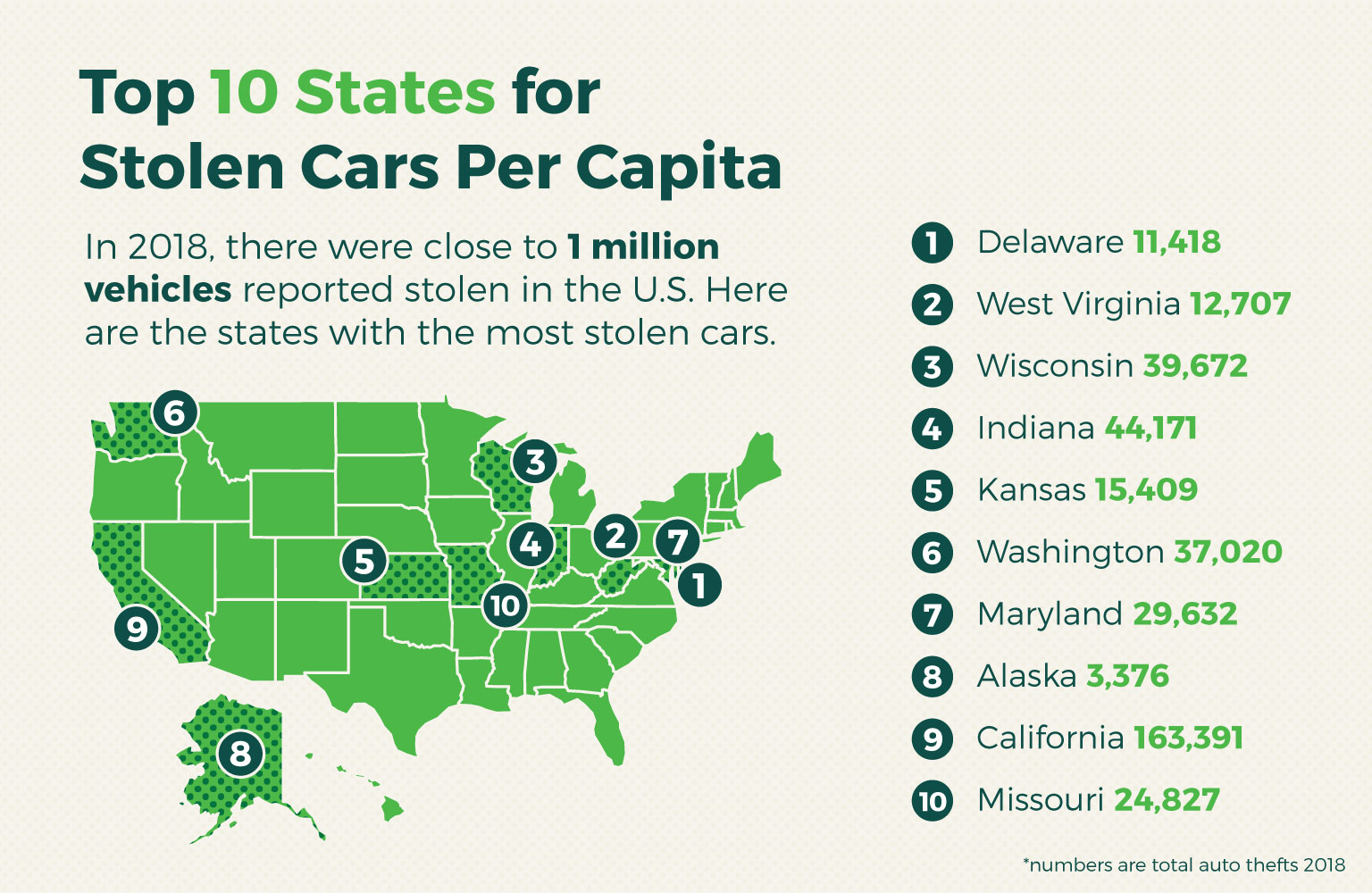 If you live in these three states, you will definitely want to consider purchasing a comprehensive car insurance policy that will cover the value of your vehicle in the event of theft.

Some of the states with the lowest rates of car theft include Vermont, Maine, and New York.

States with the Most Auto Fatalities Per Capita

Another consideration when analyzing how much auto insurance coverage you should seek in your state is the number of fatal accidents per capita. It can be easy to look at the sheer volume of traffic-related deaths in states like Texas and California, with 3,722 and 3,602 deaths in 2017 respectively. What’s more shocking, however, is the states where car crash deaths per capita are high. 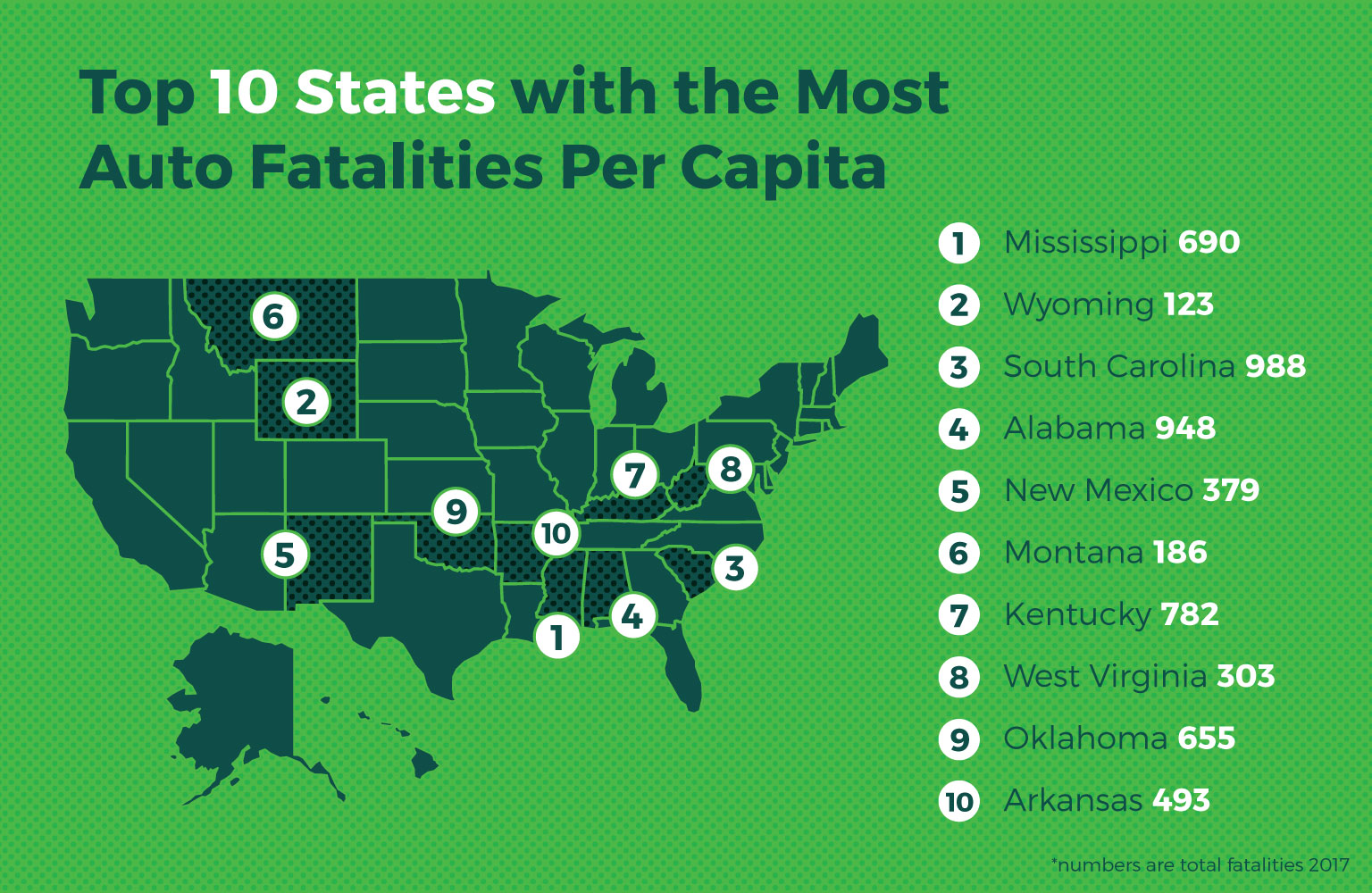 The top three states with the most fatal car accidents are:

Other notable states with a high rate of car crash fatalities include Alabama, New Mexico, and Montana. The states with the lowest number of auto fatalities per capita? Minnesota, Massachusetts, and New York are all places where the chances of being the victim of an auto-related fatality are lowest in the U.S.

If you live in Mississippi, Wyoming, or South Carolina, however, you may want to consider increasing your current auto insurance policy coverage.

States With the Most Drunk Driving Arrests 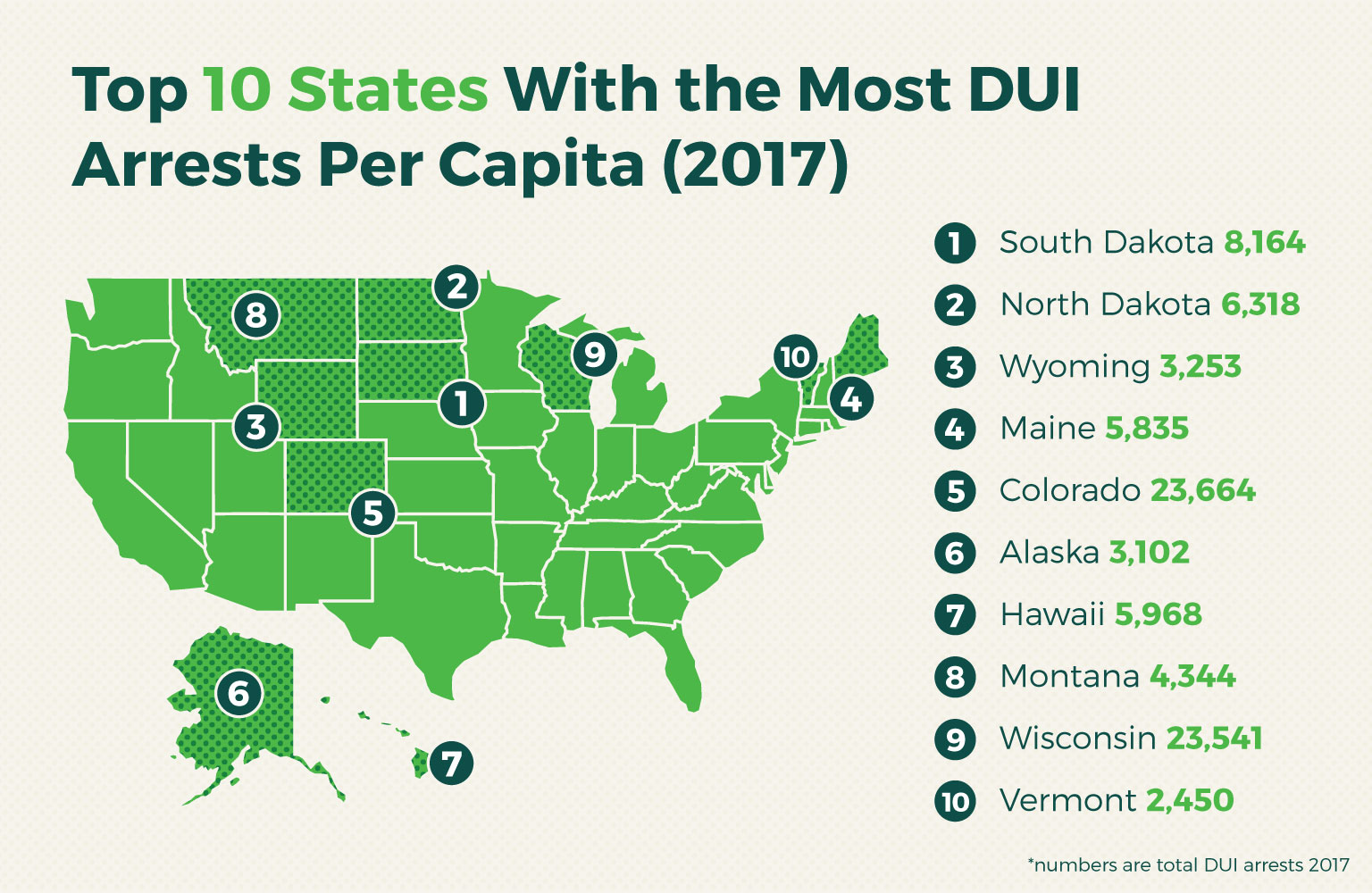 When you consider the states with the most DUI arrests for minors (under 18 years of age), the top states shift slightly. Two of the top three states for underage drunk driving arrests were not represented in the top 10 states with total DUI arrests per capita.

Arizona has the most underage DUI arrests per capita with 198 minors arrested in 2017. Pennsylvania, the state with the second most DUI arrests of minors under the age of 18 per capita, had 349 arrests in 2017.

The only state to have the most underage drunk driving arrests and total DUI arrests was Colorado. There were 239 minors arrested in 2017 for DUI and 23,664 total arrests made for DUI in 2017.

States With The Worst Weather For Driving

Approximately 21% of car accidents are caused by adverse weather conditions.

With this in mind, we wanted to see which states are the most likely to have wet pavement or rainy conditions. Here are the top states with the most annual rainfall. 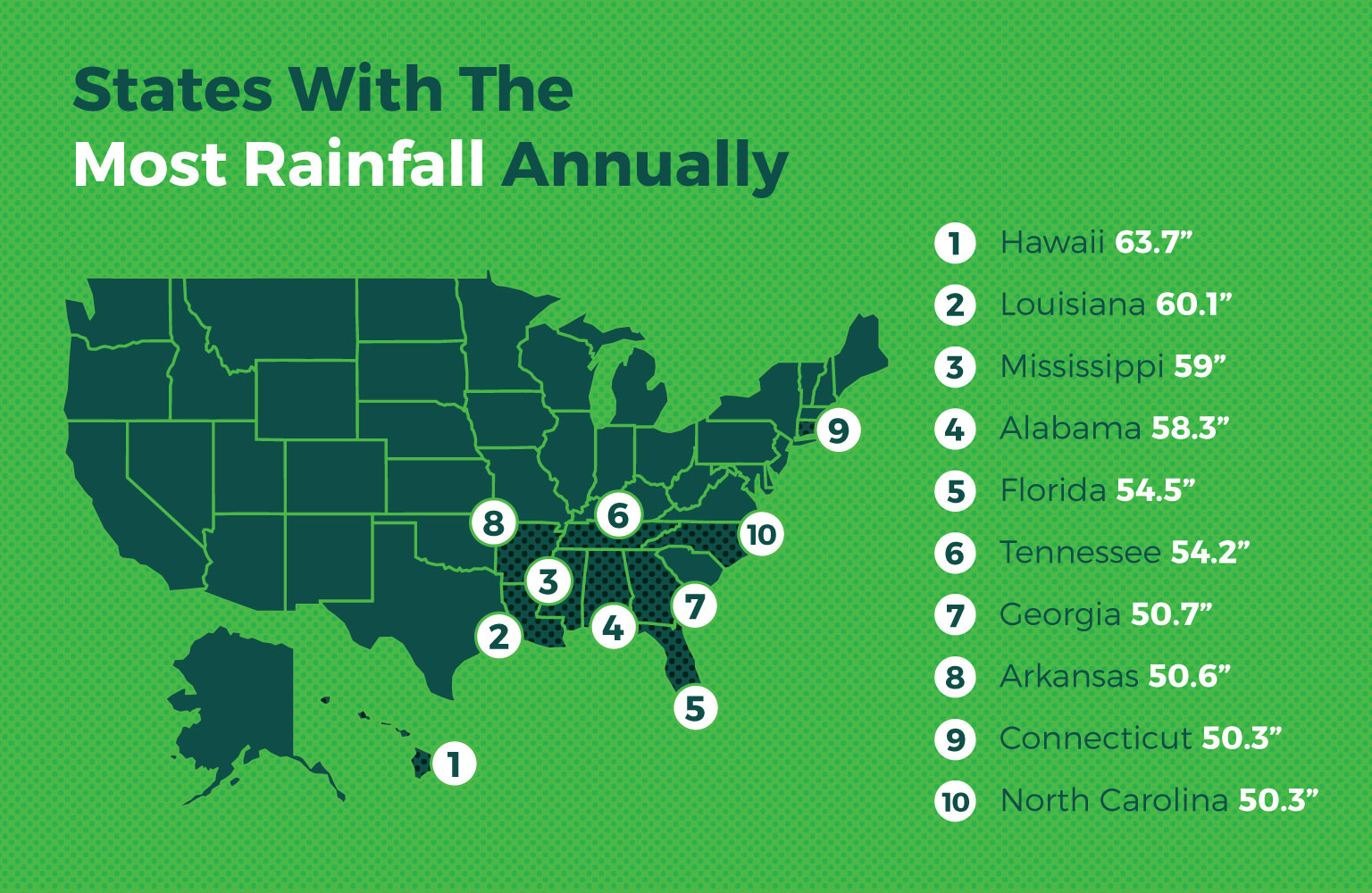 If you live in states with a lot of rainfall, you are likely aware of how dangerous the road conditions can become. Even so, you may not have been aware of just how much rain can increase your chances of a car accident, which is why you should consider evaluating your current auto insurance coverage if you live in these states with the most rain per year:

In this study, we calculated a score based on four metrics:

Below is the ranking of all 50 states and Washington D.C.