Why Do Insurance Companies Love Football So Much?

Who are you rooting for this Super Bowl Sunday? Do you want Tom Brady to snag his seventh Super Bowl ring, or would you like to see the Chiefs defend their title? While we may all be rooting for opposite teams, we’ll still have to sit through the clever yet never-ending insurance commercials. As it turns out, insurance companies seem to love football — and for a very good reason.

“The average cost of a 30-second ad during a regular-season NFL game is nearly $700,000,” says Michael Kipness, founder of The Wizard.

That’s a lot of money for 30 seconds. But think about it like this: 19.3 million viewers tuned in to watch the 2020 NFL season kickoff alone and around 100 million for the Super Bowl. All the big names spend millions of dollars to run their commercials during the games simply to access the massive audience football draws in. A 30-second ad space during the Super Bowl 55 will cost roughly $5.5 million, so companies must see the pay off as worth the cost.

It’s all about the audience

We’ve established that insurance companies continue to invest a lot of money in football. And it isn’t hard to see why.

“According to Sports Business Journal, 92 of the top 100 most-viewed television programs were sports,” says John Sweeney, director of the Sports Communication program at the University of North Carolina. “78 of the top 100 belonged to NFL programming, including the Superbowl, the number one program in 2019.”

Football games are some of the last programs people tune in to watch live on television. So, the nearly 20 million people watching are a guaranteed, engaged audience.

Beyond the sheer number of people that watch, who is watching, is arguably more important for insurers. “Males between the ages of 18 to 34 are a huge demographic in terms of football viewership. They’re also the ones paying the most for insurance and looking to save some money,” says Kipness.

“Insurance advertising budgets are enormous. Geico and Progressive each spend over $1 billion on marketing and advertising. Since everyone needs insurance, these brands will seek out television shows with large audiences and that leads to football,” explains Sweeney.

The core of the NFL’s sponsorships are insurance companies, and it doesn’t just stop at commercials. From the stadium names to player spokespersons, the insurance company has invested a lot in the NFL. Nationwide has even snagged former NFL quarterback Peyton Manning as the face of its advertising.

In fact, Peyton’s contribution to 2014’s “Nationwide is on your side” jingle is considered one of the company’s most effective paid-media ads ever. A year later, the insurer drew in $43 billion in sales across its product lines.

Nationwide and USAA seem to be taking the lead on advertising this season, according to Ty Stewart, CEO & President of Simple Life Insure. However, we’ll still see smaller, localized insurance brands during the commercials too.

“You might also notice an uptick in ones from Cigna and its affiliates.” Cigna is a worldwide insurance and health services company whose offerings span health and dental to life insurance. “They’re also one of the NFL’s top 2020 sponsors,” Stewart adds.

What types of insurance are advertised the most?

Most commercial slots advertised are about home and auto insurance. A strategic move based on a simple fact: insurance is one of the products nearly every possible football viewer owns in some form – and in many cases, is legally required to get.

“But we’re actually seeing a slight uptick in life and disability insurance this season,” says Stewart.

“Many point to COVID for that trend, as the pandemic has made more folks think deeply about protecting their income and legacy for loved ones should something happen,” Stewart adds.

Why insurers love football so much comes down to who is watching and how often they tune in. The symbiotic relationship between insurance companies and the NFL will likely continue until it isn’t profitable anymore. But as people will always need insurance, we don’t see that happening any time soon.

How COVID-19 Could Change Insurance For the Better 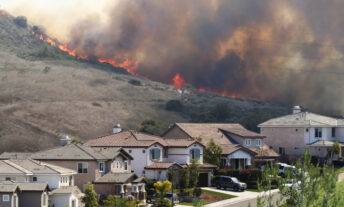 The West Coast Wildfires Are a Home Insurance Crisis