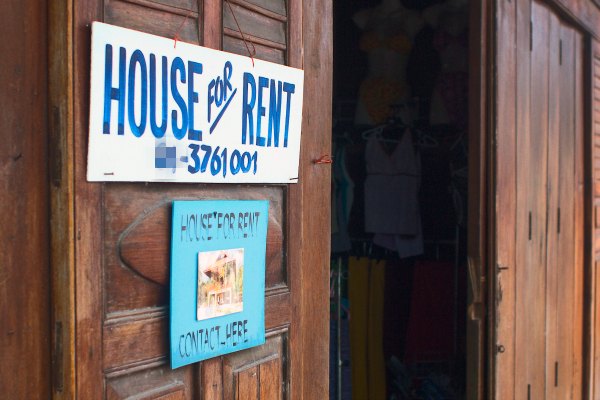 Being a landlord can be a smart move — but it’s also fraught with insurance and tax implications, so educate yourself first. Photo: Colin and Sarah Northway

When I say real estate tycoon, your thoughts probably jump straight to Donald Trump or somebody on a reality show. Then you probably smile a little bit and think to yourself, “If only I had an investment property, I could be on my way to a mega-fortune in no time at all.”

Well, if you currently own your home or are planning to buy a house, you could wind up becoming a real estate speculator a lot sooner than you think.

Becoming an accidental landlord is not all that odd or uncommon, as many people find out firsthand. The situation usually arises when homeowners are unable or unwilling to sell their current home. This is often the case when a homeowner has little or no equity and, after closing costs and commissions are factored in, a sale wouldn’t yield enough money to satisfy the old mortgage.

The solution is to keep the house and turn it into an investment property while they wait for the market to appreciate, so they can at last sell it at a profit, or at least break even. And who knows: Maybe it will be the start of their own mini-Trump empire.

However, there’s a but — actually, there are a whole slew of buts — waiting in the wings, starting with the fact that being a landlord is not easy.

Ask any group of small-scale rental property owners (one to 20 properties) and they will tell you that there is a lot more to being a non-resident landlord than collecting rent. And I can assure you from personal experience that even collecting the rent can be an exercise in patience and perseverance.

Regardless of the circumstances that led you to become a landlord, the first thing you should do is start putting aside as much cash as you can to cover your mortgage, property taxes, and insurance.

Finding a tenant for your house is easy. Finding a good tenant is hard. The first mistake accidental landlords make is assuming that all prospective tenants are responsible. Assuming that the rent will be paid in full, and on time, so that you can roll over the payment to cover the mortgage and other expenses — plus a little something for the kitty — is a rookie mistake nearly everyone makes.

You can reduce your chances of getting stuck with a bad tenant by sticking to the first rule of landlords and nuclear arms treaties: Trust but verify. No matter how nice the people who want to rent your house appear to be, and no matter how convincing they are when they insist that they’re responsible, don’t take them at their word! That may sound cold, cruel, and callous, and maybe it is. But we’re talking about giving complete strangers the keys to a piece of your property that may be worth hundreds of thousands of dollars.

When it comes to cash flow from a rental property, the flow often starts off in the wrong direction. That begins with doing your due diligence on prospective tenants.

Background and credit checks run from $25-$50 each and can add up if you get a string of losers before you settle on a keeper. While you can download and modify a form lease for little or no cost, you’re better off spending a couple of hundred bucks to have a local attorney draw up a lease that conforms with state and local laws.

Late or missed rent is only one part of the cash flow conundrum that accidental landlords face. Make sure you budget for unexpected repairs and regular maintenance.

Even if you’re relatively handy, you won’t always be able to perform these tasks at night after work, because while you may own the house, it’s not your home. That means you can’t show up at 7 p.m. with a monkey wrench, a smile, and the promise that if you don’t get the water fixed tonight, it will be working by the weekend for sure.

So unless you’re semi-retired or have tons of vacation time in the bank, you’re going to have to fork over some funds for professionals to do repairs.

The hook that turns most people into accidental landlords is the same one that can bite you on the butt down the road: For the most part, real estate almost always appreciates in value. But the part that can take a chunk out of your rear end is capital gains tax. This is especially true if your house is in one of the real estate markets that has consistently outpaced inflation for the past 40 years.

This potentially sticky wicket gets stickier if you have some equity in your house when you become an accidental landlord. The capital gains tax is incurred by investors, including accidental investors, when they have a profit on the sale of a capital asset. In this case, the capital asset is your rental house, and even though the tax accumulates while you own the house, it is not payable until you sell it.

The good news for accidental landlords is that if you lived in the house for at least two years before you started renting it, and sell it within three years of moving out, you’re entitled to a gain exclusion of up to $500,000 for married couples ($250,000 for singles).

If, on the other hand, your house goes down in value or you are underwater on your mortgage when you sell (i.e., you owe more than your house is worth), you may be subject to a tax on cancellation of debt. For instance, if you owe $200,000 on your mortgage, but your house sells in a short sale for $175,000 and the bank forgives that last $25,000 on your loan, it can be treated as taxable income.

Either way, you should consult with a qualified tax accountant regularly so you don’t find yourself with a hefty tax bill you can’t afford.

Like a professional wrestling steel cage match, the second home versus rental property insurance issue doesn’t depend on a clear set of rules but what the referee sees. When it comes to insurance, the referee is the insurance company, and different companies see things differently.

The threshold for how long a unit must be rented out to be considered either a rental property or a vacation home can range from a few weeks to a few months. This may not be an issue if you plan to flip your former home in just a few months, but if not, you’re probably going to have to secure different insurance.

That is, unless you live in the same home as your new tenant — for instance, in a two- or three-family unit — in which case you may be able to add a unit rented endorsement to your existing homeowners policy.

Check with your insurance company rather than making assumptions about what is allowed. The risk of keeping your old homeowners policy in place after tenants move in is the very real possibility that your insurer will refuse to pay any claims.

Whether they are called landlord policies, rental unit insurance, or dwelling policies, they all provide similar coverage to a homeowners policy with the biggest difference being that they do not cover contents.

Dwelling policies fall into one of three categories: DP1, DP2 and DP3. Like HO forms on standard homeowners policies, they each offer different types of coverage from basic to comprehensive.

DP1: This is the most basic and least expensive of the landlord policies. It is a named peril coverage, which means you are only insured for losses that occur as the result of certain named risks. Typically the perils covered by this are:

These are common perils, but policies from different insurers may be different. This is why you should always check with an agent and read the policy for yourself rather than assuming different perils are covered. Most DP1 policies are based on actual cash value of your house. That means that depreciation is deducted from damages when you are awarded a claim. The actual cash value may not be the best choice for older houses, because the older they are, the more they have depreciated, and the less they are worth using actual cash value.

DP2: Like a DP1 policy, this type of coverage is for named perils only. The named perils under a DP broad form usually include all of the perils listed for DP1 as well as:

As with a DP1 policy you should always check with your agent and review the actual policy rather than making assumptions about coverage.

Unlike DP1’s, which pay claims utilizing actual cash value, DP2 policies are usually written using replacement cost as the basis for paying claims. Replacement cost coverage does not deduct for depreciation before paying claims and, as a result, landlords will have lower out-of-pocket costs in the event of a claim.

DP2 policies often include a “Loss of Rents” provision that reimburses landlords for lost rental fees while repairs are being made for losses due to covered perils. The loss of rents provision has limits that include not paying for loss of rents for damage that occurs while the property is vacant. Policies may not cover some or most of the named perils for properties that have been unoccupied for a period of time, usually between 30 and 60 days.

DP3: This is the most comprehensive of the three types of landlord policy and generally considered the best coverage for non-owner occupied properties. Unlike DP1 and DP2 policies, this is all peril coverage rather than named peril. All peril policies cover all possible risks with the exception of excluded perils such as:

DP3 policies are based on replacement cost of your house, which means you are fully protected regardless of the age of your property. This means damage to your dwelling will be completely repaired without any out-of-pocket cost to you. Like DP2 coverage, these policies include loss of rent protection based on the same rules as a DP2. This type of coverage is similar to a standard homeowners policy in that it offers some protection in six areas:

It is important to note that the personal property coverage of DP3 policy is far from being as extensive as a standard homeowners policy and only insures the property owner’s possessions, such as appliances.

It does this by insuring against injuries to guests and visitors of your tenant in the event they are injured due to the tenant’s failure to properly maintain the property. The advantage is that claims for those injuries are placed against the tenant’s insurance and not yours, which protects your premium from unnecessary increases.

Read Everything and Ask Questions

Becoming an accidental landlord comes with a very steep learning curve that unfortunately does not allow much room for errors or time to gain much-needed experience.

Considering that the financial stakes are so high — not only in terms of direct financial loss, but potential hazards to your credit — it pays to invest as much time and effort as you can to learning the ropes of being a real estate investor.