How Strict is Your State? Dog Bite Laws in the U.S.

In the U.S., 36% of households own at least one dog. There are so many joys that dogs provide to families, however owning a dog can also come with liabilities. Even the friendliest family dog can bite someone if they’re scared or defending their owner, territory or food.

That’s why states have introduced legislation to address the consequences of dog bites. The punishment for dog owners whose dog has attacked someone can vary on a variety of factors, such as the severity of the bite, leash laws in the location the bite occurred, if the dog was previously known to be vicious and more.

Here we’ll break down everything you need to know about dog bites, including what to do if your dog bites someone. Plus, check out our own survey data about what Americans would do if they were bitten by a dog.

What is considered a dog bite?

Dr. Ian Dunbar, a veterinarian and dog behaviorist known for his dog training books and videos, created the first evaluation system to understand the severity of a dog bite at different levels. It’s broken down into six levels outlined below:

While level 1 and level 2 comprise of over 99% of dog bite incidents and owners have the potential to resolve the problem with training, level 3 and higher are more problematic and can result in the need for extreme, hands-on training or in some cases, euthanasia.

It’s important to know what level of dog bite has occurred to understand how to approach medical attention, the legality around the event and insurance claims.

How prevalent are dog bites in the U.S.?

Dog bites occur more than you might think with an estimated 1,000 people in the U.S. require emergency care treatment for serious dog bite injuries every day. As a dog owner, this statistic alone proves how important both dog training and home insurance coverage is to protect yourself and others. These are just a few of the shocking statistics behind dog bites in the U.S.:

14% of Americans would press charges if a dog bit them 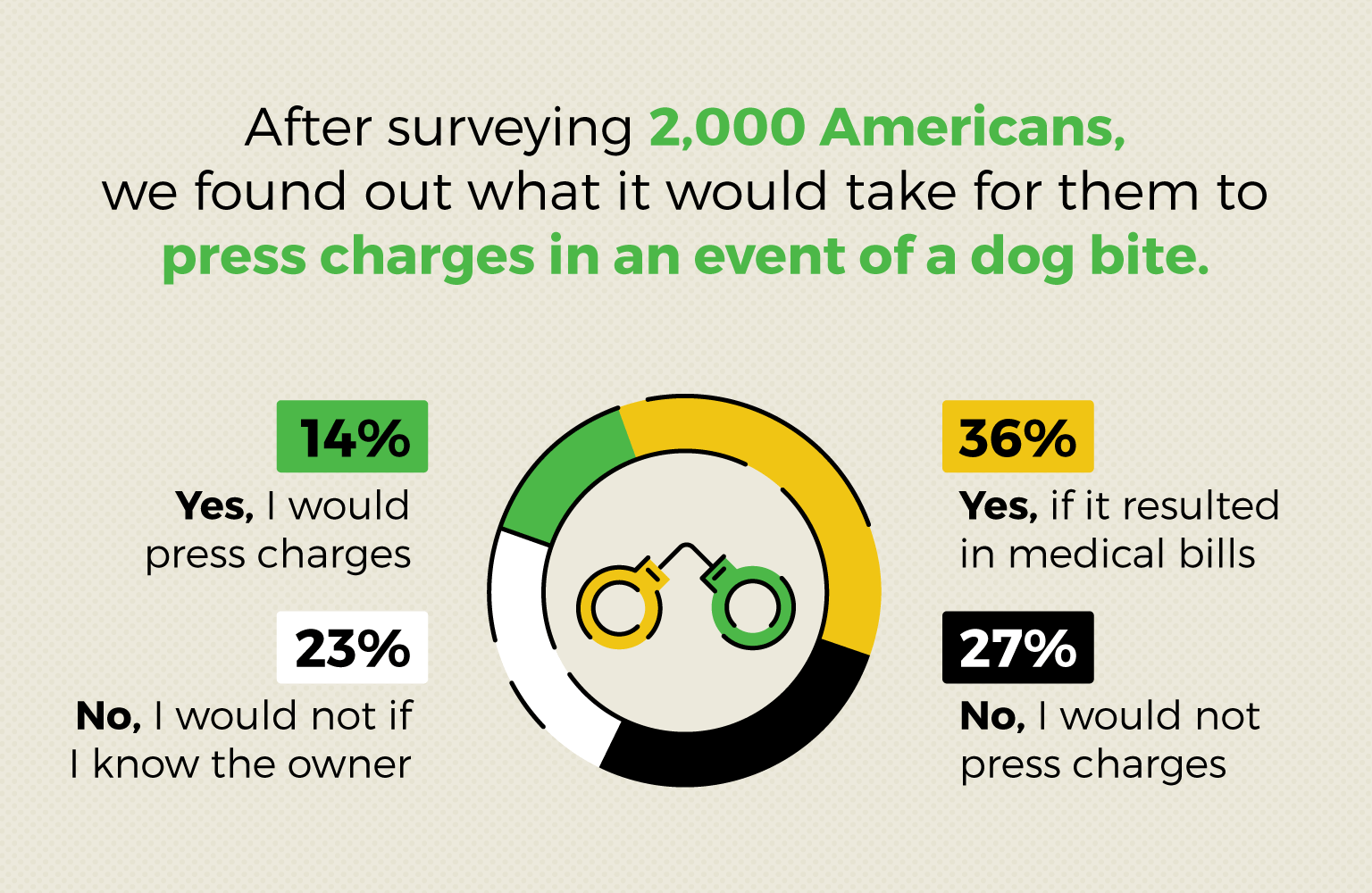 We found it surprising that for a majority of people, they would only press charges if the bite resulted in medical bills. 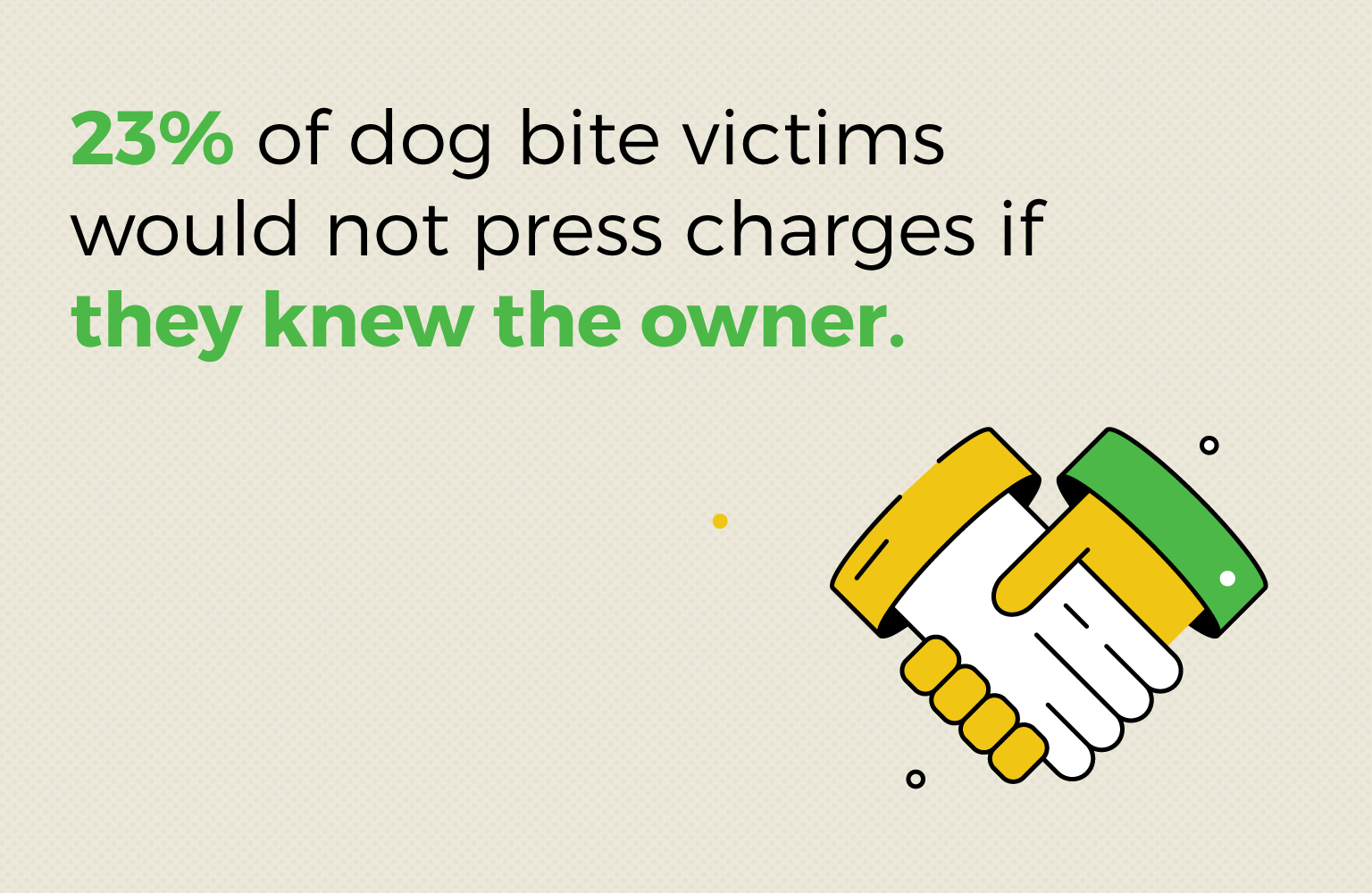 The legality for consequences of dog bites in each state is clearly defined, however, it’s up to the victim whether or not they want to press charges against the dog owner. Nearly a quarter of victims (23%) would not press charges if they knew the owner.

Results show that women appear to be more compassionate towards the situation with 26% revealing that it would depend on if they know the owner when it comes to pressing charges. That’s compared to 20% of male respondents who would approach the situation similarly. 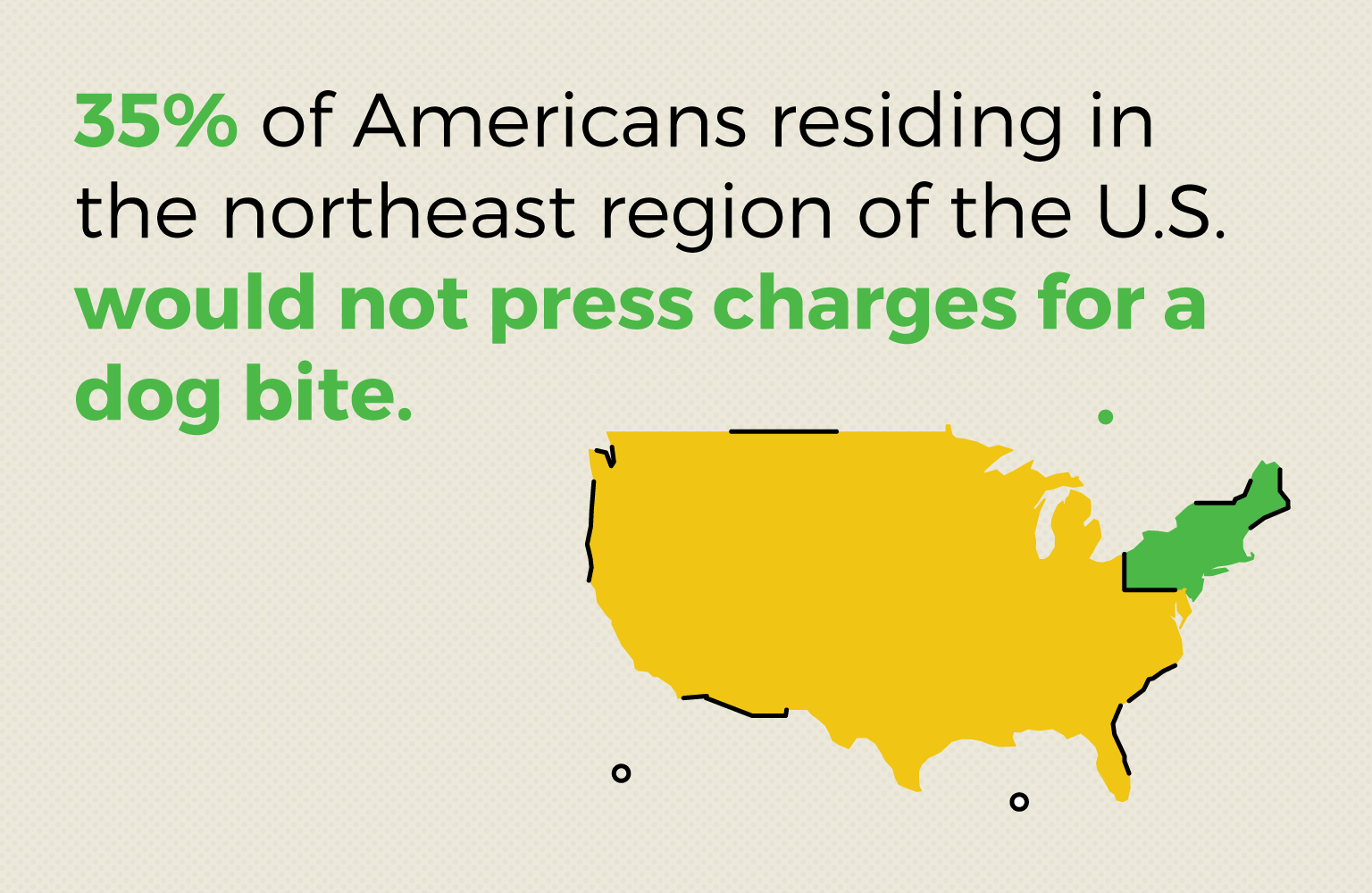 The liability that owners have if their dog bites someone is determined on the state and local level. In some states, owners are liable for any bites that take place, while in others, owners have a “one bite” law, which doesn’t hold the owner accountable for the first bite if the dog didn’t show dangerous tendencies in the past. Some states target specific breeds, requiring insurance coverage for owners of dogs that are considered risky.

There are three types of laws that impose liability on owners: one-bite rule, dog-bite statute and negligence laws.

One-bite rule: State dependent, the owner is not held liable for the first bite a dog inflicts. 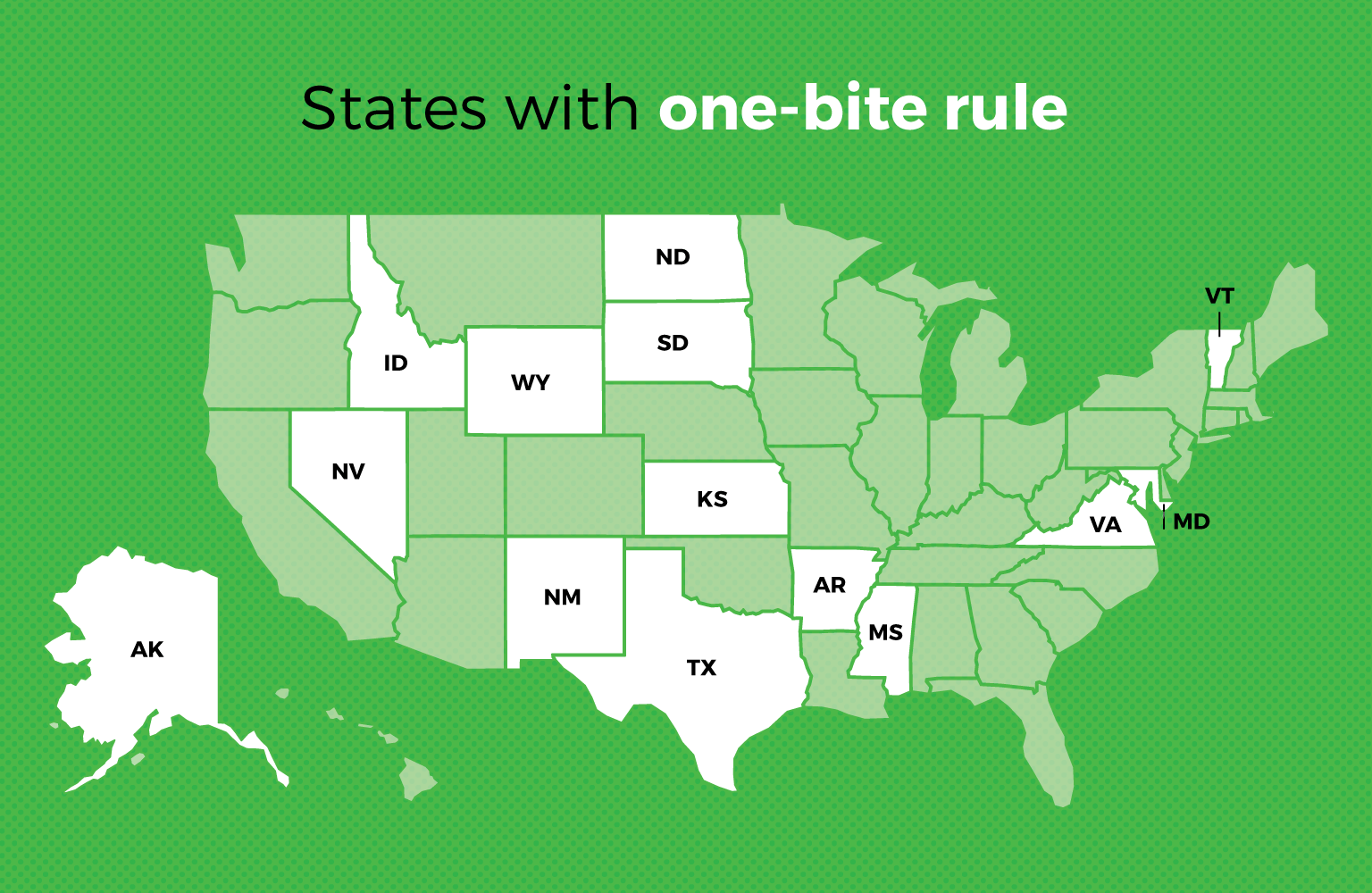 Strict liability dog bite statute: The dog owner is held liable for any injury or property damage that the dog causes. Dog bite statutes can vary by state. For example, some states may be less strict if the bite took place on private property versus public property.

While the dog owner is held liable if they are negligent in controlling their dog, states also have their own laws about what is considered negligent.

To learn more about the legislation for dog bites in your state, you can find the statue here. 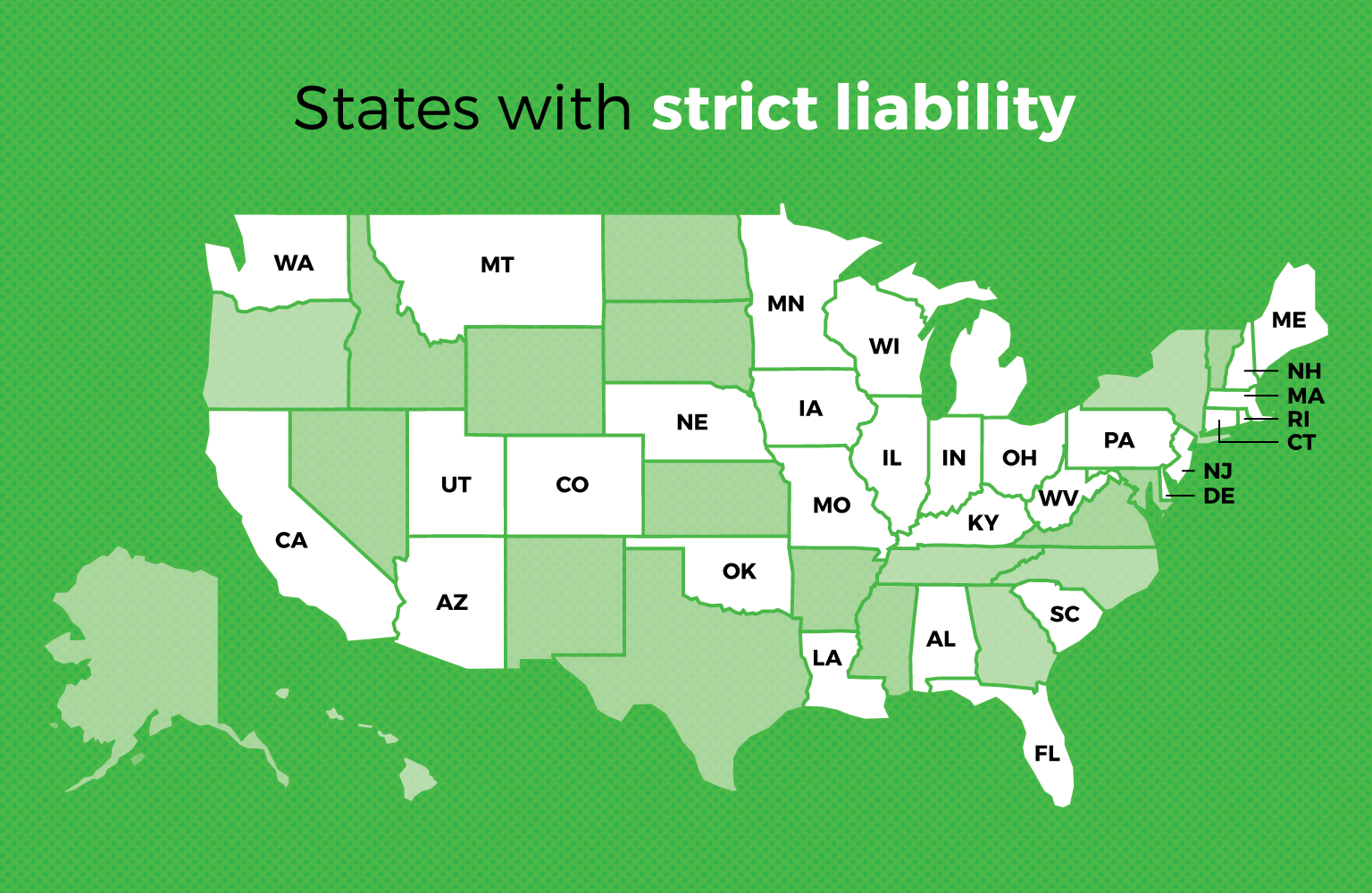 Steps to take in the case of a dog bite 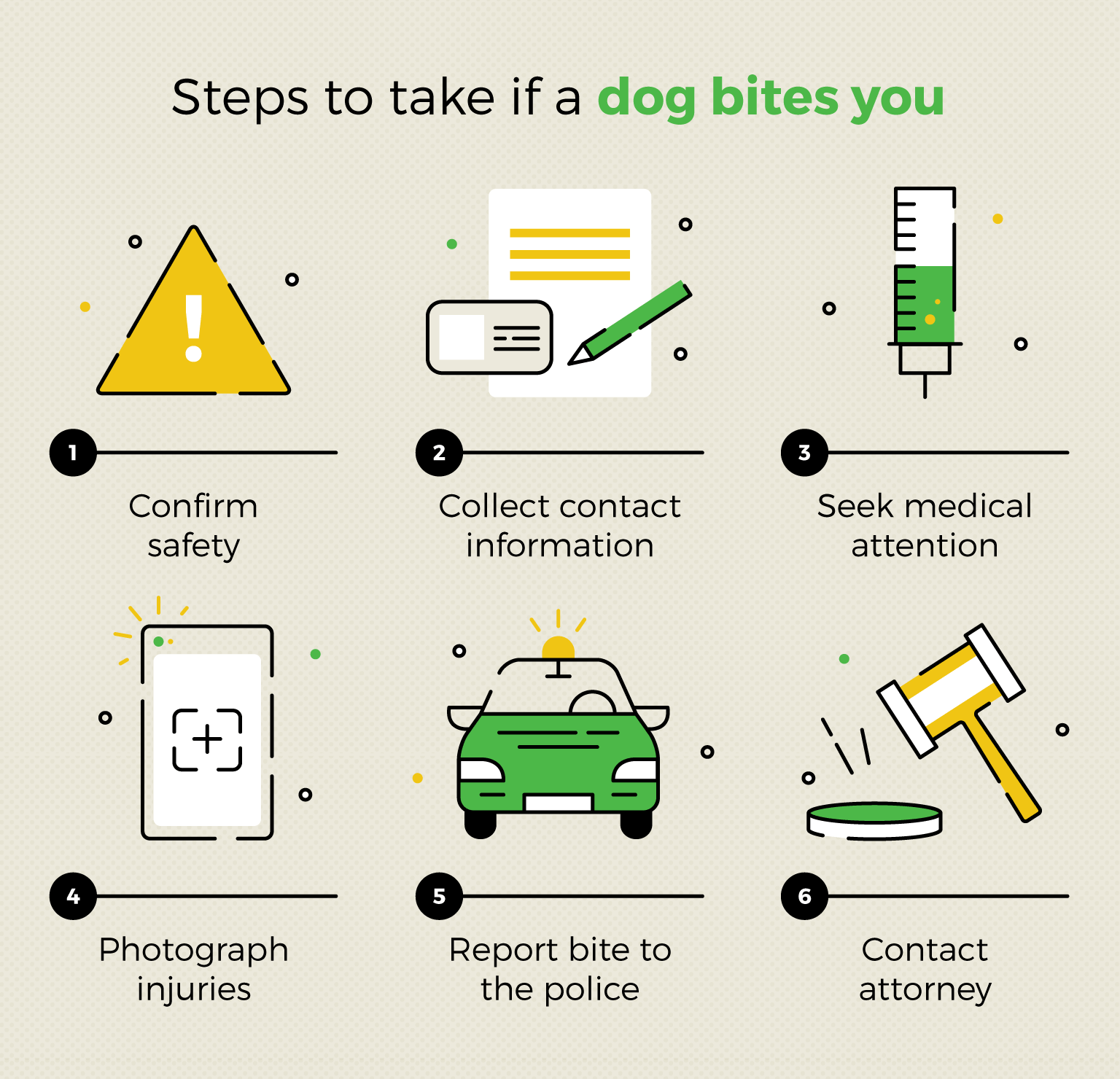 Dog bites can occur at unexpected times, but it’s important to take the right steps to ensure the health and safety of you and the person who was bit. Be sure to follow the steps recommended by the CDC and DogsBite.org below to reduce the risk of infection and get the help that the victim needs.

Read through our visual below to learn more about dog bites in the U.S.

Regardless of the state you’re from, it’s recommended to make sure that your homeowners insurance covers your dog if they were to hurt someone while on your property. Be aware that many insurance companies will exclude certain breeds.

Enter your ZIP code below and be sure to click at least 2-3 companies to find the very best rate.

The Simple Dollar used Google Surveys to pose one question to the general American population on January 30, 2020. 2,000 Americans were surveyed about what it would take for them to press charges in an event of a dog bite.