With stories of intense localized thunderstorms and flash flooding becoming more common, you should take time to read the fine print regarding your homeowners insurance policy and its flood coverage. While much flood damage will be fixed after homeowners insurance kicks in, many homeowners are unpleasantly surprised by the startling reality that damage caused by floodwaters is likely not covered by their policies.

Most homeowners insurance policies don’t cover damage from flooding or any other source of groundwater unless the cause of the intrusion is covered, notes insurance insider Todd Erkis, author of What the Insurance Companies Don’t Want You to Know: An Insider Shows You How to Win at Insurance.

While U.S. homeowners who live in a “special flood hazard area,” as determined by the Federal Emergency Management Agency (FEMA), are required to buy flood insurance through the National Flood Insurance Program (NFIP) for as long as they have a mortgage, many homeowners are not required to carry special flood coverage.

According to CoreLogic, Houston, Texas, was left in a particularly tough spot two years ago after hurricane floods because more than 50% of properties in the city at high or moderate risk of flooding are not in designated flood plains. Since these homeowners weren’t required to purchase special flood coverage, many didn’t. Some studies are saying that as many as 80% of Hurricane Harvey victims didn’t have flood insurance at all.

3 reasons why you should get flood insurance

Even if it’s not required, you should consider getting flood insurance.  While your mortgage lender will require you to purchase flood insurance if your home is in a FEMA-designated special flood hazard area, that doesn’t mean you can’t, or shouldn’t, buy flood insurance voluntarily.

If you’re on the fence about flood insurance or feeling vulnerable after hearing about the flood damage in Houston, here are some reasons to consider purchasing this important coverage.

1. Flood insurance outside flood-prone areas can be very affordable.

Flooding tops the list as the most costly natural disaster to affect the nation. And surprisingly, a quarter of flooding claims come from areas that aren’t high-risk for floods. A standard home insurance policy doesn’t cover flooding damage, so it’s advisable to add flood coverage to your policy.

Katie Foley, a licensed insurance agent in Massachusetts with 15 years of experience providing homeowners with insurance and risk management advice, recommends nearly all homeowners buy flood insurance whether they’re required to or not. And the cost of flood insurance may not be as high as you think. If you’re purchasing a traditional homeowners insurance policy already, your carrier may be able to add flood coverage at a reasonable cost, she says.

Foley also says some eligible property owners can buy flood insurance through the NFIP at a cost that “tends to reflect the lower hazard.”

But, how much does flood insurance cost? Mark Welstead, who is the President of restoration firm Rainbow International, says the average cost of flood insurance is around $660 per year. However, rates will vary depending on your home’s value and your proximity to a flood plain.

2. Living outside a designated flood zone doesn’t mean your property is safe.

While the government does its best to estimate where flooding will occur, its models can become quickly outdated and may not reflect today’s risk for flooding.

“Flood zones are determined by past conditions but cannot predict future conditions or climates,” says Foley. “It’s impossible to draw a line and determine exactly where the water is going to stop.”

Because of this, Foley says many floods occur outside these designated special flood hazard areas. This includes recent flooding in Houston, but also elsewhere around the country – specifically near the nation’s coasts and in low-lying inland areas near rivers and lakes. FEMA says more than 20% of flood insurance claims fall outside flood zones each year.

James Howard, an insurance agent from Fidella Insurance Agency in New Jersey, says one way to assess your home’s vulnerability if you’re worried is to check the dates on the flood maps in your area. Older maps will not account for recent developments, he says, and those changes can alter the risks of water getting close to your home.

“Take the town I grew up in, Hamilton, Ohio,” says Howard. “Residents complained when new flood maps placed them at risk saying it had never flooded before. Literally a month later, those same residents were under four feet of water. What changed is a huge amount of development had increased runoff surrounding the community, leaving the water one place to go.” The same pavement principle probably exacerbated flooding in fast-growing Houston.

3. Flood damage tends to be catastrophic.

As mentioned, floods are the most common and costly natural disaster in America, with 90% of all natural disasters involving flooding. FEMA reports that flooding causes billions of dollars in damage every year. On average, floods cost Americans $8.2 billion in damages annually.

And, the flooding doesn’t have to be extensive, either. As FEMA estimates, recovering from just an inch of water inside your building can cost about $27,000. The Agency’s latest report shows the average amount paid for flooding-related losses in 2020 is between $13,048 and $26,660. The cost of flood insurance may be nominal compared to a loss. Without flood insurance, you’d be left to cover the costs of those renovations entirely on your own.

If you’re thinking of buying flood insurance, it’s important to speak with your insurance agent to figure out how much coverage to buy, the cost of flood insurance, what exactly it covers, and how long your waiting period is. Welstead says that you typically need to pay for your flood insurance policy for 30 days before your coverage is in force; you can’t just pick up a policy at the first sign of a big storm system in the forecast.

And if your current insurer doesn’t offer flood insurance, you can buy a separate flood insurance policy without switching agents. Welstead suggests going to floodsmart.gov to find an agent in your area.

Before you buy coverage, some of the questions you should ask include:

What is a flood zone?

A flood zone is an area more likely to experience flooding. Flood zones are designated on a flood hazard map by FEMA and are rated according to levels of severity. The zones are:

Some areas may be marked with a V, meaning they haven’t been valued for flooding. When you purchase your home, you’ll receive a disclosure about whether your home is in a high-risk flood zone or you can look up the map.

Who should consider flood insurance?

A common question homeowners ask themselves is, “do I need flood insurance?” If you live in a high-risk area like Florida, you should consider adding it to your policy. Everyone who owns a home should consider flood coverage, even if you don’t believe you need it. As mentioned, roughly 25% of flood damage claims come from low or moderate-risk areas.

Is there government aid for floods?

The National Flood Insurance Program provides affordable flood insurance to homeowners, businesses and renters. Additionally, if the president declares an area a natural disaster, you may qualify for federal aid in a variety of ways, including help with food costs, utility bills and rebuilding your home.

Flooding is more common than you may think and the damage to your property can be serious. It’s the most costly type of damage in the country, with 90% of all natural disasters involving flooding. Some areas are more prone to flooding than others, but few regions in the country are entirely safe from floods. Flood insurance isn’t included in your standard homeowners policy but is worth adding — it can be a lifesaver in case of a natural disaster. 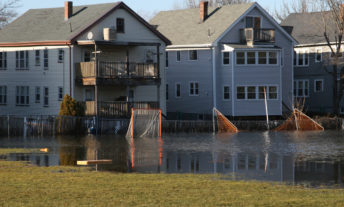 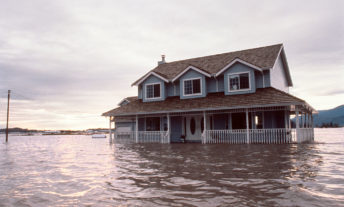 Cynthia Paez Bowman is a finance, real estate and international business journalist. Her work has been featured in Business Jet Traveler, MSN, CheatSheet.com, Bankrate.com and Freshome.com.

She owns and operates a small digital marketing and public relations firm that works with select startups and women-owned businesses to provide growth and visibility. Cynthia splits her time between Los Angeles, California, and San Sebastian, Spain. She travels to Africa and the Middle East regularly to consult with women’s NGOs about small business development