Last year was the hottest year ever, handily beating the previous record — set in 2014. In fact, 15 of the 16 hottest years in recorded history have happened in the 21st century.

That’s why, in 2011, environmental activists at a handful of college campuses began advocating for divestment, demanding that their schools purge fossil fuels from their investment portfolios. Their argument, more philosophical than financial, was this: If carbon is irreversibly warming and harming the planet, it would be wrong — particularly for a high-minded academic institution that aims to be on the frontier of science and policy — to profit from it. What’s more, by collectively pulling out millions or billions in investment dollars, a divestment movement could put immense economic pressure on the fossil fuel industry.

The idea spread quickly. Five years later, hundreds of colleges around the country — from big-name universities like Penn State and Syracuse to small liberal arts schools like Swarthmore and Hampshire College — have sold or pledged to sell their stakes in fossil-fuel investments.

One of the biggest names in divestment so far is Stanford University. True to its Silicon Valley roots, Stanford was an early adopter of this strategy, divesting from coal companies in 2014. The University of California system, meanwhile, sold off $200 million worth of oil investments last year from its $98 billion portfolio.

And right now, with coal and oil prices cratering, both of those actions look like pretty shrewd financial moves.

The Fall of Fossil Fuel

The Market Vectors Coal ETF (KOL), a decent proxy for the coal industry at large, is down a staggering 68% in the past 12 months. Compare that to the S&P 500 Index, which has slipped a modest 7.4% over the same time period — dragged down in part by oil giant Exxon-Mobil (XOM), the index’s third-largest component, which has fallen 16.9% over the past year.

Indeed, oil stocks suffered as badly as coal in 2015. The price of crude oil is down 60% since June 2014, and oil services giants have tanked as a result. ConocoPhillips (COP) is down 45% over the past year. Dividend darling Chevron (CVX) is down 23%. Marathon Oil (MRO) has plunged 68%.

Even before the most recent downturn in oil and coal, however, fossil-free portfolios were outperforming conventional ones. Last year, stock-index and ETF provider MSCI estimated that investors who divested from fossil fuels in 2010 would have earned a 13% annualized return over the preceding five years, compared to an 11.8% return otherwise.

In fact, Stanford reported a 7% investment gain in its (coal-free) endowment in the 12 months ending June 30, 2015. Those returns beat the 5.2% increase in the S&P 500 over the same period. (Stanford’s endowment fund also outperformed that of Harvard University, which has yet to divest from fossil fuels — though it did not match the returns of similarly un-divested MIT and Yale.)

By now, what started as a movement on college campuses has outgrown academia in both philosophy and practice. As of September 2015, more than 400 institutions and 2,000 high-net-worth individuals — with combined assets of $2.6 trillion — had committed to divest from fossil fuels, according to Arabella Advisors. That’s more than a fifty-fold increase from the $50 billion pledged a year earlier.

Colleges may have started the party, but they now comprise just 5% of that total, with large pension funds and private companies dominating the divestment movement. California recently voted to divest its $476 billion public employee pension funds from coal investments, joining Providence, R.I. and a number of public pension funds from Norway to Australia. 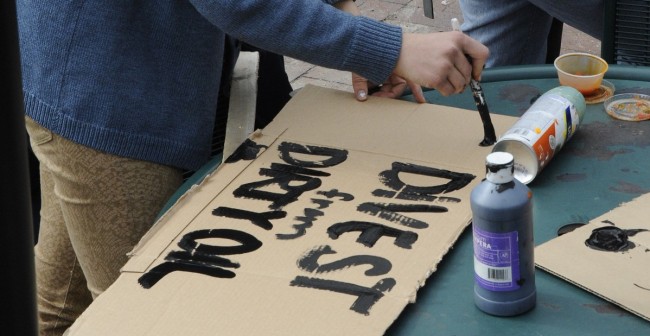 Now, whether divestment as a political strategy actually works is the subject of some debate. Eric Hendey of the Harvard Political Review suggests that perhaps the most famous and successful divestment campaign in memory — the boycott of South African stocks during Apartheid – worked more because of the visibility and public backlash it inspired than the financial pressure alone.

But regardless of whether it succeeds in weakening the fossil-fuel industries, proponents of divestment say it’s a smart financial move in its own right. It’s the difference, they say, between clinging to an aging technology and investing in the future.

A 2015 report by Impax Asset Management Group concluded that investors should be prepared for increased carbon regulation around the world, and therefore move toward cleaner energy investments:

Given the growing consensus around climate change science, it is rational for investors to expect much tighter carbon regulation — with profound economic effects — in many regions of the world in the not-too-distant future. These regulations are likely to be incremental, and they are only moving in one direction: towards a lower-carbon world…. Few investors will successfully anticipate the likely bursting of the carbon bubble.

Right now, divestment advocates are looking pretty smart. With crude oil trading around $30 a barrel — versus the $100 mark it has hovered at or above for years — some high-tech and expensive extraction processes, such as fracking, are no longer as profitable. And that’s hurting the domestic oil industry; you won’t be seeing oil- and gas-rich states like North Dakota and Texas dominating those lists of “Best State Economies” or “Best States for Jobs” this year.

In fact, it’s a lesson that actually discourages divestment: Diversification works. States with more varied economies, like California, Colorado, Massachusetts, or North Carolina, can better weather a downturn in any one industry. Likewise, an investment portfolio that’s evenly spread across the entire market is more resilient over the long term.

Like it or not, coal, natural gas, and oil are still responsible for an enormous share of the massive energy sector in the U.S. While oil prices are at a 12-year low, it’s a famously boom-and-bust industry; sell now and you may cash out at rock bottom only to watch the stocks gush upward a few years from now. Denying your retirement fund of exposure to those profits, oil-gained or otherwise, isn’t a decision to take lightly.

So what’s a forward-thinking retirement investor to do?

In its report, Impax suggests that investors stay diversified by maintaining exposure to the energy sector — just in a greener form. “Investors should consider reorienting their portfolios towards low-carbon energy by replacing fossil fuel stocks with energy efficiency and renewable energy investments,” the report says, “thereby retaining exposure to the energy sector while reducing the risks posed by the fossil fuel sector.”

Still, another issue with divestment at the personal level is that it can be tricky to rid your portfolio of just oil or coal stocks. If you invest in diversified index funds, which we recommend here at the Simple Dollar, you can’t just tell the S&P 500 to jettison a couple of its biggest carbon emitters. Some of them, like Exxon or Chevron, comprise a substantial portion of the index.

However, there are some environmentally responsible funds cropping up to make this easier. While they vary in their approach, most exclude fossil fuel companies but are otherwise diversified across the U.S. stock market.

The funds’ top holdings are a pretty diverse, if tech-heavy, cross-section of the American economy, minus the carbon: Apple, Microsoft, General Electric, Johnson & Johnson, Wells Fargo, Alphabet (Google’s parent company), Amazon.com, Nestle, J.P. Morgan, and AT&T round out CRBN’s top 10 holdings; LOWC’s top 10 are almost identical. Other S&P 500 stalwarts, from Home Depot and Pfizer to Toyota and Procter & Gamble, are in there, too.

All that’s missing is Big Oil.

Loading Disqus Comments ...
Latest from Trent
What To Do With That Last Little Bit Left in the Container
What to Do When the Novelty of Frugality Wears Off
Buying the Best, or Just Good Enough?
Read more from Trent
Featured on: