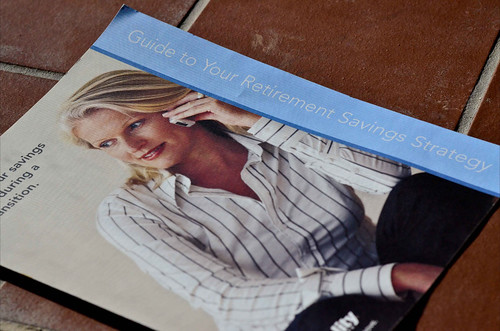 Let’s be realistic here. If you’re under the age of about 50 or so, you’re playing a fairly dangerous game in assuming that Social Security in anything close to its current form will be there for you when you hit retirement age. Most likely, the money will be a pittance and not nearly enough to survive on. There’s some chance that there will be nothing at all.

Don’t rely on that pension, either. Companies go under – even governments go under. Many look for ways to get out from under the financial burden of paying out that pension they’ve promised to their employees, and many get away with it.

The only retirement tool I believe in is one’s own savings for retirement, and that’s where a 401(k) (or similar plan) comes in.

For most people, a 401(k) is the absolute easiest way to get started saving for retirement. In many workplaces, you just fill out a form, they take a little money out of each of your paychecks, and you’re saving for retirement. Not only that, the money taken out of your checks isn’t very painful at all. If they take out $20, it likely only drops your take-home pay by $16 or so because the money is taken out before taxes are calculated.

That’s not to say you shouldn’t look at the investments and try to figure out the best one. The thing is, you can do that later. You can change investments later on without much difficulty at all if you decide you’d rather be in something else. The only difference is that if you start saving for retirement now, you’ll actually have money in there to move.

Of all of the financial mistakes I made in my early life, the one I didn’t make was putting money away for retirement. I saw the challenges my parents were having as they neared retirement and I didn’t want to have that kind of difficulty. I put in quite a lot, and I’ve never really stopped.

You won’t miss the small amount that’s gone from every paycheck, but a few decades down the road, you certainly will miss not having hundreds of thousands of dollars in retirement saved if you don’t make this move today. Just do it.