Retirement Plans in a Down Stock Market

After writing my piece yesterday on fear and the economic situation, a very eloquent reader named “Maggie” wrote to me:

I completely agree with your assessment on the economy, particularly if you’re young. There is no crisis that is well served by panic and I don’t think that the current economic situation is anywhere near as bad as the Great Depression.

That doesn’t change the fact that many people (myself included) are looking at their 401(k) statements for the year and are seeing 20-30% drops for the year. I looked at my 401(k) and I saw that it’s down about 19% for the year.

I’m about six years from retirement, or at least that was my plan until this year. Now that I’ve lost so much money, I don’t know if I can retire then. I will probably have to work several more years beyond that, because even if the stock market goes up 20% the next two years, I’ll still only be back to about where I started. 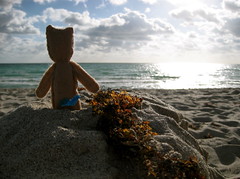 Maggie tells a story that’s been repeated in the media quite often over the last week or so. My mother-in-law and father-in-law are also likely in the same group as Maggie – they’re in their mid 50s and are building a solid nest egg in their 401(k)s, but have watched some sizable chunk of that savings vanish this year.

If you’ve already lost that money, it’s gone. There’s no magic way to get back what you’ve lost. For some people who are getting close to retirement age, that means you will have to work a few years more. Your retirement date probably went from 2014 to 2020 or so. That’s unfortunate.

But the blame doesn’t go to the flailing of the stock market. The blame actually goes towards poor asset allocation in your retirement account.

The problem comes in when that future isn’t quite so far any more. If you’re getting close to retirement, your investment in stocks becomes less of an investment and more of a gamble.

Since I’m thirty years away from retirement, I have a lot of coin flips ahead of me. I’ll likely see some runs of heads and some runs of tails, but over that long period, it’ll approach an even split in flips. That even split will mean a pretty good return on my investment.

But let’s say you’re now five years from retirement. That means you have only five coin flips. There’s now a measurable chance (a little over 3%) that all of your remaining flips will be bad, losing you a significant amount of money. Instead of being a volatile investment, it moves more towards being a gamble.

So what’s the solution? Most money managers recommend that as you get closer to retirement, you should slowly start taking your money out of stocks and putting it into something safer, like bonds or money markets. These investments won’t return as well over the long haul as stocks, but they’re as steady as can be – a 2% to 6% return that comes in like clockwork.

A Target Retirement fund automatically does this transition for you. Right now, my Target 2045 fund (since I’m so far from retirement) is almost entirely in stocks (and it’s been painful to watch it drop). But I have many, many years for it to rebound. When I start to get closer to retirement – in 2020 or so – the fund will automatically begin to adjust, reducing the amount of my retirement money that’s invested in stocks and increasing the amount that’s invested in other things. When I get very close to retirement, most of the money is not in stocks.

Unless you know the ins and outs of risk management and asset allocation, there’s no reason to not use a Target Retirement fund in your 401(k). Call up your plan manager and see if there’s anything like it available to you. If you want to push the risk a little bit (but, of course, remember what 2008 has been like), then use a fund that’s a little bit past when you want to retire. If you’re conservative, use an earlier fund. Then just dump all your contributions into that fund, sit back, and relax.

The next time the stock market flops, you might worry about it a bit, but it won’t be cataclysmic. You’ll be appropriately diversified without having to even skip a beat.