Something to Think About in a Stock Market Downturn

Over the last week or two, as is always the case when the stock market dips a little, people write to me and ask whether or not they should be changing course in terms of their retirement investments.

Right now, we are undoubtedly having a string of down days. Since the start of the year, the S&P 500 – the stock market index that I pay attention to – has dropped from 2038.20 to 1921.84, which is a 5.7% drop in value in about two weeks. If you have $500,000 in stocks in your retirement account at the start of this, you just lost $28,500 in value since the start of the year. That’s a pretty crazy roller coaster ride, and some people want to get off that ride.

However, if you’re invested in stocks, it’s never quite as bad as it seems to be.

For one, it’s impossible to predict what’s going to happen tomorrow, let alone over the next year or the next 10 years. Even if you sell today because you think the market is going to go down more and you’re right about that, you still missed the peak by about 10%. Let’s assume that you correctly identify the rebound later on, but you miss that by 10%, too. Unless this is a cataclysmic year comparable to about 2008, you’re going to not gain very much by buying and selling if you miss the peak and the valley by 10% of the total value.

For another, if you’re doing this outside of your retirement funds, you’re likely facing a lot of tax implications. Thankfully, most people who have money invested outside of retirement funds are stable enough to not make such drastic short-term decisions, but there are some who would do so.

Let’s slow down and break this down piece by piece.

The S&P 500 itself is simply a number that estimates the health of the overall stock market. It includes the share value of 500 different companies, wrapped up together into one single number for convenience. If you’re a baseball fan, it’s kind of like a league-wide batting average. Some stocks in the S&P 500 do better than the average and some do worse, but this is the overall average of the stock value of those 500 companies.

Let’s say you own an investment that matches the S&P 500, like the Vanguard 500, in your retirement account. The Vanguard 500 is an example of a mutual fund, which means that lots of people buy shares in that mutual fund and the company running the fund uses all of that money to invest. People who own shares in that mutual fund can then buy or sell them to other investors and usually back to the investment firm that originally sold them. The company makes money by taking a tiny portion of the overall value of the mutual fund each year for themselves.

The Vanguard 500 simply matches the same 500 companies in the same proportions that make up the S&P 500. Since there’s no real management work involved, Vanguard can offer that investment pretty cheaply – they take a very small cut of it compared to many other mutual funds.

This is called an “index fund” – it’s a mutual fund that runs almost on autopilot based on straightforward rules, and because of that it’s usually very cheap to run and the savings get passed along mostly to the investors. 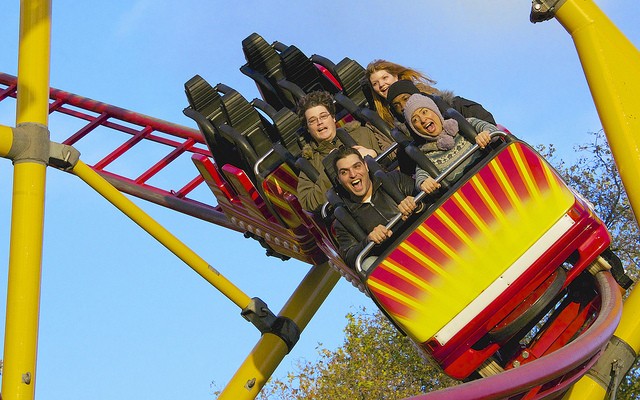 Investing in the stock market can be a roller coaster ride, and not everyone enjoys the ups and downs. Photo: Jamie McCaffrey

What neither number includes, however, is the dividends.

Most publicly traded companies – this is true for about 400 of the 500 companies in the S&P 500 – issue dividends once every three months. That means for each share of stock in that company, the owner receives a small cash payment – a quarter or so for many companies, but it varies. This is a reward to their investors for believing in the company and owning the stock.

The total value of the Vanguard 500, including all of the shares of it that investors have bought over the years, is invested in those 500 companies in order to match the S&P 500. So, that means overall, the Vanguard 500 actually owns many, many thousands of shares of each of those companies. So, when those companies pay dividends, the cash rolls in by the millions. Vanguard then adds up all of those dividends, divides by the number of Vanguard 500 shares out there, and then issues its own dividend, which means every person who owns a share of the Vanguard 500 gets a dividend each quarter. In a typical year, that quarterly dividend is about 0.5% of the current value of the S&P 500, give or take a little.

(Here’s another way of thinking of it: If you own a share of Vanguard 500, then what you actually own is a tiny sliver of a share in each of the 500 companies that make up the Vanguard 500. Then, when those companies pay dividends, you get a tiny sliver of the dividends paid by each company, but those slivers add up and you end up getting something close to the average dividend paid by each of those 500 companies.)

So, why am I talking about all of this?

When you see the price of a stock market index falling on the news, you’re not seeing the dividends included there.

For example, on Dec. 21, a share of the Vanguard 500 was worth $186.30, but on that day, each share received a dividend worth $1.092. That dividend is not included in the share value – it’s an extra cash payment that shareholders receive.

This adds up to a lot of money over time. Take a look at this article by David Blitzer, the chairman of the S&P Dow Jones Index Committee, entitled Inside the S&P 500: Dividends Reinvested. People who left their money in the S&P 500 from January 1988 to July 2013 doubled their money by simply reinvesting their dividends back in by using it to buy more stocks.

Here’s another interesting piece of food for thought: During a stock market downturn, a lot of companies don’t cut their dividends. They pay out just as they had before. Thus, if you’re reinvesting dividends, you can actually buy more shares during a downturn than you could when things were riding high. That way, during the inevitable rebound, you’re actually going to rebound far stronger than you would have if you had pulled all of your money out.

In a period where the market is volatile like this, it is very tempting to simply take your money out and put it into something safer – bonds, cash, whatever the case may be.

When people buy and sell based on market ups and downs, they usually miss the high point when selling and miss the low point when buying, which often means that they didn’t gain very much at all by bailing out – and they certainly missed those dividends while they were out.

In the end, there are a lot of reasons to just sit tight when the stock market goes into a volatile period, but very few speak directly to dollars and cents like dividends do.

The only reasons to sell stocks are because your investment goals are coming closer and you need to move to something safer or else you actually need the money for something in your life (and that should be a last resort). Any other reason for selling stocks isn’t a good reason.