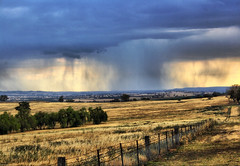 As I write this, the stock market has just completed the single best day in its history. This follows the worst week in its history, in which the market lost approximately 20% of its value (depending on the indicator you use). The volatility of the stock market has never been higher, and people out there are basically just guessing at this point. Case in point: Jim Cramer predicted over the weekend that the Dow would drop to 4,700 by Tuesday afternoon.

The uncertainty can be unnerving, to say the least. About two weeks ago, I argued that the only thing we have to fear is fear itself and encouraged people to be calm, but I fully understand it’s not easy to do that if you’re watching your 401(k) erratically bounce up and down like a two year old on a trampoline.

Here are ten realistic suggestions for getting through financial turbulence without your ulcers flaring up. I myself do most of these things.

1. Stay away from pundits

The talking heads on CNBC and the other cable news channels make money off of being sensational and for making stock picks that benefit them personally. Don’t waste your time listening to any commentator. Instead, look for impartial (or at least as impartial as you can) sources for your news and information. Stick as hard as you can to facts and make up your own mind. If there’s something you don’t understand, do your own research.

2. When the market isn’t turbulent, develop an overall investment strategy

Right now isn’t the time to make major changes, but once the turbulence calms down a bit, take a look at your overall investing strategy. What are your goals? Are your investments in line with those goals? A good example is retirement savings – many people are too heavy into stocks in their retirement plans and have paid the price over the last year.

3. Stick to “timeless” investment principles instead of the flavor of the month

There are a lot of investment strategies that have worked time and time again over the last hundred years or so, both in up markets and down markets. Dollar cost averaging. Value investing. Growth investing. Stick to strategies like these, not “flavor of the month” strategies like jumping head first into dot-com stocks in the late 1990s or flipping houses in the mid 2000s.

Many people were tempted to sell their stocks last week because they kept losing money. If you did that, you probably quickly saw why it was a bad idea – an immediate 11% bounce happened on the following Monday. What’s the point? Don’t make a move with your investments just because that’s what everyone else seems to be doing. You don’t make money by following the herd – you only lose money.

5. Sell according to your own reasons and needs

If you have an investing strategy in place, the only time you should ever sell is when you need to withdraw your money or because something has triggered a change (reaching a certain age, for instance). Day-to-day or even year-to-year market changes shouldn’t change your strategy.

6. If you NEED big gains, increase your contributions, not your risk

Many people were invested heavily in stocks because they needed to hit 12-15% returns in order to retire when they wanted to. Guess what? 12-15% returns over a long period aren’t realistic. You might luck out and get those kinds of numbers over a few consecutive years (like 2003-2007), but it’ll be followed by a correction. If you need big gains like that to reach a goal, you need to be contributing more towards that goal – or you need to be rethinking your goal.

7. If you can’t state concrete, specific reasons why you’re in an investment, you shouldn’t be in that investment

This really means two things. First, you have to know what you’re investing in. Read the prospectus. Do the research. Know what it is you’re buying. You should be able to name a specific, concrete reason why you’re purchasing that investment – and past performance is not a concrete reason. You might be invested in an individual company because you believe in that company’s management or you think they produce stellar products or the company has an inherent competitive advantage over their immediate competition or they work very hard to pay good dividends to shareholders. You might be invested in a broad index fund because you believe in capitalism itself over the very long term. You shouldn’t be in an investment because it’s “hot” or because the sector is “on fire” – those aren’t reasons, those are selling points from commission-based advisors and pundits.

8. If you don’t know what you’re doing, get a fee-only investment advisor to help

If you thought you were following a safe strategy but then found out that you’d lost a lot of money, it may be a matter of simply not knowing what investments you should be in. The solution to that is to hire a fee-only financial advisor, one that does not get a commission if they “sell” you an investment package. Get some help and do things right.

9. Any money you will need in the next five years shouldn’t be in stocks

This is a good rule of thumb to follow. If you are going to need money in the next five years for any reason, don’t keep that money in something as volatile as the stock market. Move it into bonds or CDs so that you know the principal is safe. You might miss out on some exceptional gains, but you’ll also miss out on periods like the last two weeks.

10. Don’t look at your day-to-day balance

If you’re sure about your strategy and your reasoning, your day-to-day balance is just a distraction. Don’t even look at it. I haven’t looked at my retirement account balances in months. Why? I know my strategy is a very long term one, so I don’t really care that much about the short term, and I also know that seeing a value decline will do nothing more than rile me up. So why do that to myself?

Know your goals. Know your investments. Don’t make rash moves. Those are the keys to weathering any storm. Good luck.

How To Save for Retirement on a Small Income

Which Retirement Plan Is Right for Me?