Millennials, many of whom are burdened with huge student debt loads, have been slow to buy their first homes — holding up the housing economy to some degree. And so Quicken Loans is making an overture to them with its new Rocket Mortgage app, promising the ability to apply for a mortgage in just a few minutes from your smartphone.

Quicken even coughed up millions of dollars to promote its new product with a minute-long ad during Super Bowl 50:

The commercial patriotically suggests that making it easier to get a mortgage will jump-start the entire American economy — by getting more people to buy houses, who will buy more stuff for their homes. (Mmmmm…. stuff.)

Beyond the blatant ode to consumerism, it comes across as an ignorant insult to anyone who paid the least bit of attention to the housing bubble and mortgage meltdown of the mid-2000s. The takeaway slogan, “Push button. Get mortgage,” evokes the irresponsible, no-documentation lending and over-extension of credit that embodied the mortgage-backed securities (MBS) era and eventually sparked the financial crisis.

The blowback was swift and stinging on Twitter last night:

If you asked bankers who worked in fixed income at the time to explain 2008-era logic re: MBS, they could have just shown Rocket Mortgage ad

why did that Rocket Mortgage ad feel like a trailer for “The Big Short 2” — Walter Hickey (@WaltHickey) February 8, 2016

Rocket Mortgage: Let’s do the financial crisis again, but with apps!

However, Quicken executives defended the spot, insisting that they haven’t loosened lending standards. In fact, The Wall Street Journal notes, “Quicken steered clear of most of the subprime products that brought the economy to its knees in 2007, making it one of the only large nonbank lenders to survive the crisis.”

What they’ve done with Rocket Mortgage isn’t to make it easier to qualify for a mortgage, which was a key problem during the housing crisis. Instead, they’re simply trying to make an onerous process easier for people who do qualify, allowing the iPhone generation to do it digitally if they want to.

“Borrowers can authorize Quicken to access their bank and other financial information directly, eliminating the need for sending pay stubs, bank statements, and tax returns back and forth,” the Journal reports.

Many younger consumers are more than willing to trade privacy for convenience. And in a world where you can outsource your banking and budgeting to sites like Mint.com, file your taxes online, and entrust all your money to an online bank you’ll never visit, it makes perfect sense to app-ify the mortgage process for people who want that convenience.

So, it’s a smart-enough idea, and perhaps not as likely to crash the U.S. economy as many people initially thought.

But it’s still a terrible ad.

Forget the glorification and over-simplification of debt-driven capitalism. Forget, even, the straight-up 21st-century rudeness of people applying for mortgages on their phones while in the audience during a live theater performance. Quicken boasts that it’s doing for mortgages what the Internet did for buying music and shoes, “turning an intimidating process into an easy one.” 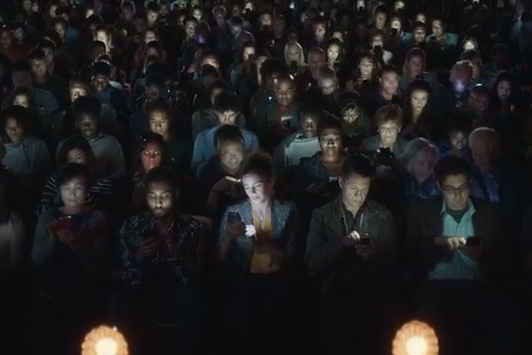 “Please refrain from flash photography and applying for mortgages during tonight’s performance.”

I’m sorry, was buying a CD intimidating? I seem to remember walking into a music store, picking out a couple of albums, and paying $10-$15 each at the register. It was the best part of my week in high school. Am I forgetting the part where I had to give them my Social Security number and itemize my debt obligations? Applying for our mortgage — asking to borrow hundreds of thousands of dollars over the course of 30 years — was a bit more complex.

Finally, while I appreciate the convenience of buying music online and streaming pretty much any song you want any time, as a musician, Quicken’s promise sounds more like a threat than a happy solution.

Rocket Mortgage commercial: “What if we did for mortgages what the Internet did for buying music?” You mean destroy it? #SuperBowl — Ben Greenman (@bengreenman) February 8, 2016

What did you think of the Rocket Mortgage ad? Would you apply for a mortgage using a smartphone app?