There’s a widespread view that if the Fed ultimately raises interest levels then mortgage rates will also rise. Financial history shows that’s not the case — and it can be argued that mortgage rates might actually fall.

Let’s start with the first idea. All over the Internet it’s been suggested that borrowers should finance and refinance now because the Fed is likely to raise interest levels.

Well, yes, on some absolute basis, at some point in the future the Fed will raise rates. We don’t know when this will happen. Remember that a lot of economists and analysts said the Fed would raise rates this summer, but now the magic date has been pushed back into the fall, perhaps to September — unless something unexpected happens, in which case all bets are off.

In other words, nobody really knows when the Fed will increase rates.

There are several reasons all of this seems strange and confusing.

First, the Fed is notoriously opaque. Even when Fed leaders make a statement of some sort it’s invariably couched in language that can mean just about anything. As former Fed Chairman All Greenspan once explained, “I guess I should warn you, if I turn out to be particularly clear, you’ve probably misunderstood what I’ve said.”

Second, the Fed does not set mortgage rates. Instead it sets what are called the federal funds rate and the discount rate, indexes which are important to banks.

“The fed funds rate,” says the Federal Reserve Bank of San Francisco, “is the interest rate that depository institutions — banks, savings and loans, and credit unions — charge each other for overnight loans. The discount rate is the interest rate that Federal Reserve Banks charge when they make collateralized loans — usually overnight — to depository institutions.” 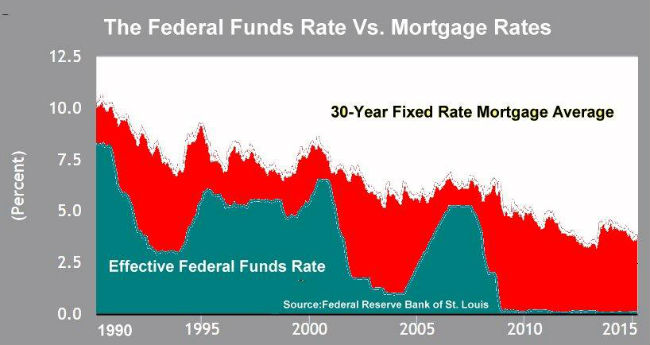 Why is this important?

Let’s say the economists and soothsayers are right and that the Fed raises the discount and fed rates in September for the first time in nearly a decade.

One very likely possibility is that mortgage rates will increase, at least in the short term.

A second possibility is that rates will remain largely where they are.

A third possibility is that rates might actually fall.

Go back to 2014. Scuttlebutt and gossip said that when the Fed ended its quantitative easing (QE) plan — the monthly purchase of private securities from Wall Street banks — mortgage rates would soar.

What really happened? Once QE was actually finished last fall, mortgage rates rose — briefly — and then fell back. Rates at the end of April were actually lower than a year ago according to Freddie Mac: 3.86% for 30-year, fixed-rate mortgages compared with 4.29% a year earlier.

Why did rates fall?

First, the Fed does not set mortgage rates. Influence them? Yes. Set rates? No.

Second, the world is awash in cash, but with negative interest in Europe and Asia a lot of investors believe that bringing money to the U.S. is a better option.

The catch is that negative interest could be coming to America. JPMorgan Chase, according to Bloomberg, is telling large depositors — those with at least $50 million — it will charge a 1% “balance sheet utilization fee” starting May 1st.

If rates in the U.S. decline then why wouldn’t investors move their money elsewhere? Some will, but a large number may still want to keep their cash in U.S. vaults because the risks in many areas of the world remain significantly higher.

The overall result could be a situation where the Fed finally raises rates, and after it does, mortgage levels might be a lot lower than many experts predict — and maybe even lower than today.