Dealing With Those Piles Of Old Baseball Cards In Your Closet 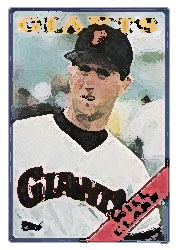 Like many people who were children in the late 1980s and early 1990s, I was an avid baseball card collector. I had numerous complete sets and a pretty big book of various individual cards of my favorite players.

My parents, fueled on stories of people selling their vintage baseball card collections from their childhood, told me over and over again that these cards could be an investment and that I should put them up in my closet. So, for more than a decade and a half, those cards sat in my parents’ closet under a sheet, waiting patiently to be rediscovered by me when they would hopefully be worth a lot of money.

I know this to be a common story. I often run into guys my own age (or slightly older) who have tons of baseball cards in their closet and can fondly recall the days when they would trade them on the playground, seeking out that coveted Will Clark card to finish out their 1988 Topps set.

Not too long ago, these cards were rediscovered by me. Unfortunately, the part about the cards having a great deal of value turned out to not be the case. Here are four lessons I learned from the experience – hopefully, these lessons will be useful to you if you also have a collection of baseball cards from your 1980s or 1990s childhood in the closet as an “investment.”

Late 1980s and early 1990s baseball cards simply aren’t worth much. Most of them are barely worth the cardboard they’re printed on, sadly enough. Complete sets, particularly from 1986 to 1993, are worth only small amounts (excepting some of the premium sets from late in that year range), usually less than $40. I had five complete 1988 Topps sets and seven more complete sets from this time frame and only the 1989 Upper Deck set was worth significant money.

Grading has become huge, but… In recent years, a number of professional firms have opened up, offering a service in which they grade the condition of an individual card, seal it in plastic, and provide a label and a verification number indicating the condition of the card. This seems great if you were like me, keeping your cards in meticulous shape, but even if you get individual cards graded, only a few individual cards from this timeframe are even worth the cost of the grading service. Thus, with the exception of a very small number of individual cards, professional grading isn’t worth it for people with collections from the late 1980s and early 1990s.

Use eBay to appraise specific cards Like I said, there are a few individual cards from this timeframe that do hold value – the first one coming to mind being the 1989 Upper Deck Ken Griffey Jr. card. It’s at least worth an hour looking up the most coveted cards of your collection on eBay to determine if they have value. Unfortunately for me, my obsession with Will Clark didn’t really pay off – his cards are worth very little today.

Don’t be afraid to sell the whole collection at once to a dealer Given that these cards are discounted, it will take a lot of legwork to make a significant income on these cards. Once you’ve looked up some of your individual cards, you’ll likely discover very quickly that most of them have little or no value. Pull out the ones that do have enough value to make the individual sale process worthwhile (cards less than a dollar on eBay aren’t worth the effort, trust me) and then take the entire collection to a dealer or two to be appraised. I took mine to a baseball card show and showed it to multiple dealers, getting three offers.

Keep them for nostalgia I wound up keeping a number of the cards, specific ones that had sentimental value for me, and using them as decoration in my office. I currently have a small, framed array of Will Clark cards (1987 and 1988 Topps cards being the focus) and a framed 1989 Upper Deck Ken Griffey, Jr. card on my desk. Only the Griffey card has some monetary value, but they all have personal value to me. When I glance at them and think back to great memories of watching baseball as a kid, collecting the cards, and trading them with my friends, I see that the cards have much more value in a frame on my desk than they ever would have being sold to a dealer for a couple dollars.