A technical note: morels are technically considered to be a cup fungi, a relative of the mushroom but biologically distinct. In this essay, I’m using anecdotal and folk terminology rather than strict biological and taxonomical accuracy.

In the past, I made a reference to a friend who hunted for mushrooms in the forest as a profitable enterprise, and I went on to mention that I, in fact, did the same, the only difference being that

I generally hunted them for fun and for eating. For me, morel hunting is a fun exercise that’s free and can potentially result in a free, delicious meal or on occasion some surprising profit.

The idea of this struck a chord with several of my readers, so when late April and early May rolled around in Iowa, I took a digital camera along on several of my morel hunting trips in order to give an idea of what the process is like, as well as give some idea of how to prepare them and also an indication of the surprising value of these forest edibles.

Please, if you’re not sure what you’re doing, don’t try this at home. This is a folk art I learned from my grandfather and there is a lot of danger involved in picking fungi in the forest, taking them home with you, and eating them. If you don’t know what you’re doing, you can become extremely ill and kill yourself. Do not attempt this!

First of all, morels are a type of fungus that grows naturally in forested areas in North America and Europe in the early spring. They’re most easily found in an area where a forest fire has occurred two or three years past, but with some effort, small numbers can be found in any forest. From my experience, they tend to grow well near sycamores and fallen elms. They are quite delicious and are especially prized in French cuisine. Even more interesting, they have never been grown successfully and can only be found in the wild. I invite you to read the Wikipedia entry for morels for more information.

Each spring, I tromp around in the woods looking for these delicious fungi. They’re a bit of a challenge to find, making it a fun adventure to hunt for them. Plus, they are delicious (they make a stellar gravy, complement beef very well, and are also tasty fried on their own) and they are also quite valuable due to their culinary use and lack of growth in captivity – which I mention in more detail below. 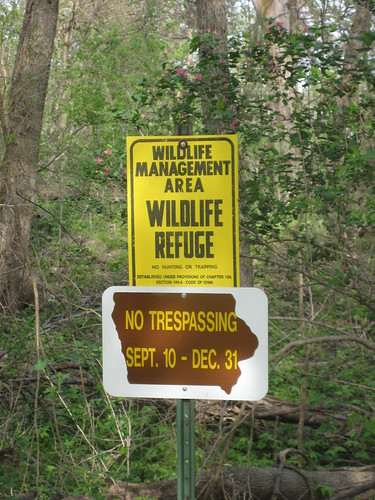 Before I go out on a hunt, I make sure to get permission. The DNS rules vary from area to area in terms of whether or not they can be picked on state land – in my area, they cannot. As a result, I have to look for them on privately owned forested areas. 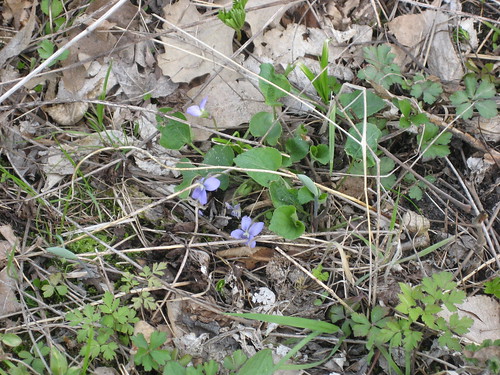 One of the best parts of hunting for morels is that it’s a great excuse to take a walk in the woods and admire the beauty of early spring. Here’s a violet growing in the wild. Interestingly, violets are edible if you ever find yourself in the woods and desperate. 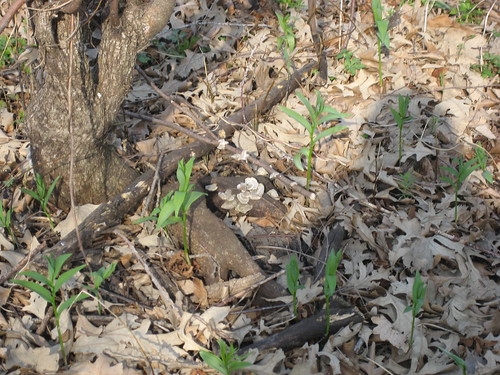 Here, I stumble across a bracket or shelf fungus. These generally grow on the side of trees in the forest, both standing trees and fallen trees. While there are a few of these that are edible – my uncle is particularly fond of a bright red type of shelf fungus that I’ve tried in the past – I don’t trust them as many of them are inedible or poisonous. So we’ll move on. 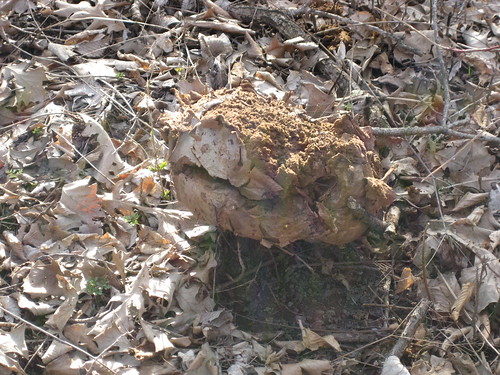 Here’s a puffball fungus that has been apparently nudged pretty severely by an animal of some sort. Puffballs are fungi that you’ll often find in the forest that grow quite large, then eventually “pop” and spray spores everywhere after some period of growth (days to weeks). My wife thought this might have been one that popped, but it looks to me like an animal was investigating it. 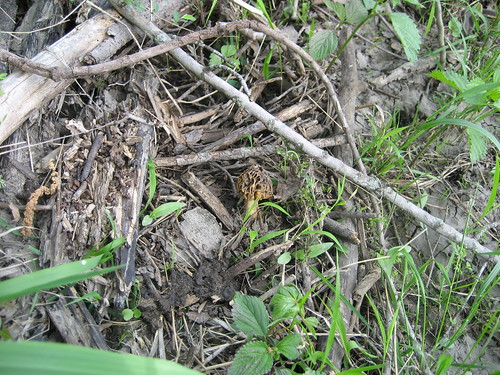 Paydirt! In the picture above, you’ll see a morel growing in the forest right in the center of the picture. You can click on the picture to get a larger view of it. Generally, when there’s one, you’ll find more of them nearby, so I started looking around very carefully. 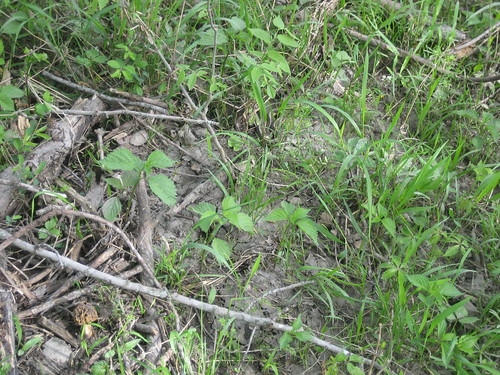 Unfortunately, I didn’t find any morels nearby, but what I did find was a garter snake, another interesting example of forest life. In the picture above, you’ll see that same morel in the lower left along with a garter snake in the middle near the top. The garter snake is a bit tough to see, but trust me, it’s there. Garter snakes are very common and relatively harmless – just leave them alone and you’ll be fine. That’s not to say I didn’t have a pet garter snake when I was a child. 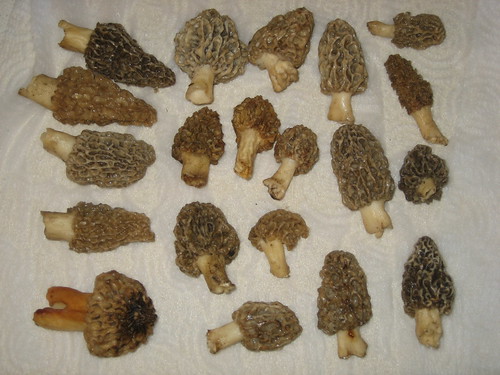 Here’s a picture of my haul from one afternoon. As soon as I got home, I washed them carefully and laid them out one at a time on a paper towel as I washed the rest. This eliminates a lot of the spores and dirt on them. 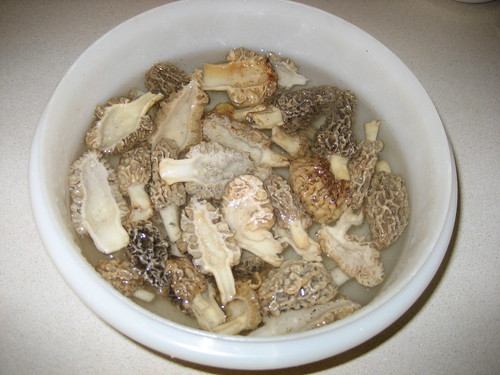 Next, I slice them in half horizontally and put them in a bowl full of water with some salt in it. In this environment, morels can remain in the refrigerator safely for up to 48 hours. After that, it’s up to you to decide how to prepare them. Here’s a large collection of morel recipes. 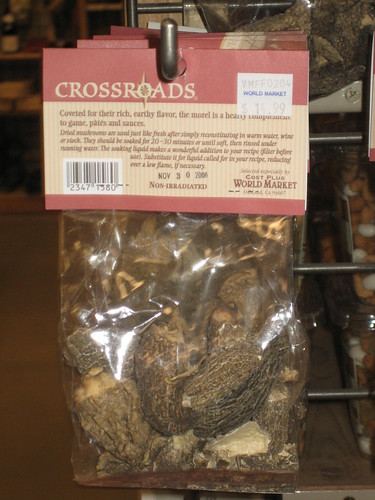 Unless you’re skilled or quite lucky, morel hunting isn’t very profitable for the time involved, but the photo above gives a good indication of the kind of money you can make. The above picture shows half an ounce of dried morels, which add up to about four or five ounces when hydrated. For comparison’s sake, I had about a pound of them above. This small amount of dried morels is selling for $14.99. Check the price tag in the picture.

I hope this was an interesting introduction to a fun, frugal activity. If you’re interested in trying it for yourself, I highly recommend asking around for a guide. Contact your state’s Department of Natural Resources if you don’t know where to begin – they may be able to point you in the right direction. Do not go out in the woods and start picking fungi without knowing what you’re doing, however; some fungi are poisonous.