The Value of Proving Yourself

A few days ago, I found myself reading an older article from The Atlantic by Joseph Williams, entitled My Life as a Retail Worker: Nasty, Brutish, and Poor. In the article, Williams outlines his own story, where his career suddenly and unexpectedly collapsed and he found himself working at an entry-level retail job. It’s a fascinating article, one I encourage everyone to take a few minutes to read.

There are a lot of things you can take away from this article. Some might read it as though Williams was entitled and felt himself to be “above” the job. Others might see that the retail job described is pretty demeaning to the worker and how this whole story is emblematic of some deep problems with how corporate America treats entry-level employees. Still others might see some flaws with how Williams handled himself in the workplace, even given the one-sided nature of the piece (it is Williams’ perspective, after all).

Instead, I kept putting myself into Williams’ shoes. What would I do in his situation?

Right now, I have a job where I have effectively “proven” myself. I’m able to work from home and don’t have any sort of day-to-day management. I have “proven” that I can consistently write and meet deadlines with almost no management whatsoever, and they know that I can do this. I’ve done it for years.

However, it took many years of doing that to reach a point where I had “proven” myself that well to my various clients.

When I first started writing The Simple Dollar almost ten years ago, I didn’t have any sort of reputation for consistency or relative quality of writing. I had to prove it. I had to write every single day, over and over and over again. I did it with such consistency that people began to expect it. After a few years, I had “proven” that I could do this consistently over the long term.

If I suddenly had to start over in a retail field, like Williams had to do, I might feel as though I had already “proven” myself. But that wouldn’t be the truth.

The truth is that I would be starting over again at the very bottom of a new ladder. I hadn’t climbed up even a single rung yet. To put it simply, if I were starting over in a new career, I haven’t “proven” myself yet in that career.

Why? Because I haven’t proven myself yet.

You have to prove yourself. No one thinks that you are special or exceptional.

You see, one of the aspects of an entry-level job like this is that pretty much anyone can get such a job without any evidence whatsoever of their character or work ethic. You often don’t need to have a thing on your resume to get such a job.

Of course, along with that comes the fact that you’re not going to be paid well, your employer is not going to fully trust you (at first), and you’re going to be seen (especially at first) as a completely replaceable cog. You’re there to fill hours doing relatively simple tasks and if you can’t do them, they’ll find someone else to do them. Yes, those tasks might seem strenuous and, at times, you might feel like there’s a lot dumped on your plate.

But that’s not the important matter.

What really matters is how you respond to all of that. Are you going to use it as an excuse to put out minimal effort at work? Are you going to resent your boss for not treating you like a special person when you haven’t proven it yet?

Or are you going to buckle down, figure out how to do your job as well as you can, learn what your boss does, and be prepared to take that spot when the opportunity comes? 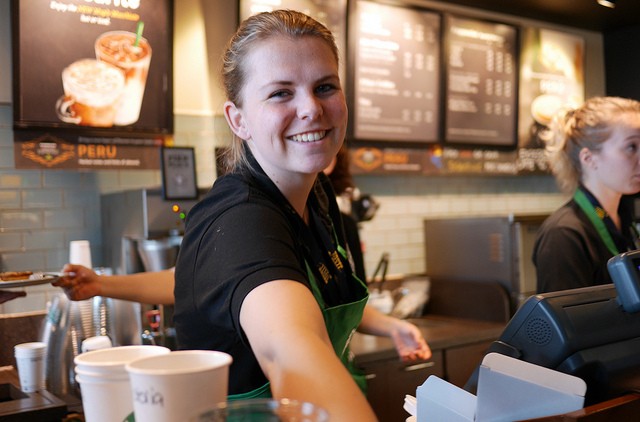 Working retail and other low-level jobs can be tiresome, exhausting, and even degrading, but it’s how you respond to those challenges that will prove your value in the workplace. Photo: Franklin Heijnen

Another vital thing worth noting here: Being a great employee for a day or a week or a month isn’t enough, either. One of the most valuable things that you can cultivate within yourself is reliability and consistency, something I hit upon in my recent article about the skills you already have for success.

So, here’s what it all comes down to.

Do you want to start over in a completely new career? You have to prove yourself. You have to start at the bottom of the ladder, enduring the tests for proving yourself that everyone else has to endure. If you fail – if you decide to just check out and not take this seriously – you’re not going to move up the ladder. Period.

Guess what? One week of hard work isn’t enough to earn a high rank in the military. One year isn’t enough. A decade is a good start.

The very first thing I’d do is realize that I have proven nothing about myself to the people I’m working with – and that, on top of that, there were few qualifications for that job. I would recognize that I am literally a cog at first, a person at the lowest rung of the ladder.

And from the second I stepped foot inside that door, I would be absorbing every bit of knowledge that I could absorb.

Every day, I would walk away asking myself if I had proven myself just a little bit. Did I do enough today to prove myself at all? Did I do what I was supposed to do at a high level of quality? Did I also look ahead to the next step on that ladder and make myself ready to take that step?

That’s the opportunity that you’re handed whenever you start off in a new field. You have proven nothing – or proven very little. You are nothing special.

It is up to you to prove it, through your consistency and hard work and willingness to learn and desire and ambition to move up.

It is proven through your actions, every day, every hour, every minute that you’re involved with that job.

And if you stick with it, if you keep working at it, proving yourself over days and weeks and months and years, the opportunities will come. By simply being willing to prove yourself, to make sure you’re doing a good job in a reliable way, and to learn about what’s next on the ladder, you set yourself apart from most of the people around you, and that will be seen.

You will prove that you have value, and that value will be rewarded.

All of this is true at any job or any entrepreneurial venture, whether it’s an entry level job at a fast food restaurant or a high level technical job or a management position or a new startup you’re trying to build. Most of the time, you haven’t proven yourself at all, and success usually comes to those who do.

Are you going to prove that you deserve the success that you think should be coming to you?