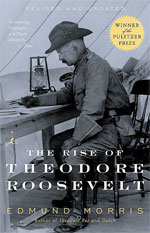 For me, few things are more compelling than biographies of compelling people who led exceptional lives. In their lives and decisions, we can all find things to think about and perhaps to emulate in our own lives.

Recently, I’ve been enjoying the first volume of Edmund Morris’s biography of Theodore Roosevelt, entitled The Rise of Theodore Roosevelt. Teddy led an extremely exceptional life – his presidency just scratches the surface. Beyond his political career, Roosevelt was also a professional historian, a naturalist, an author, and a soldier.

Early in the book, Roosevelt is attempting to figure out what he wants to do with his life. In Roosevelt’s own words, here’s the advice his father gave him (with emphasis added):

My father … told me that if I wished to be a scientific man I could do so. He explained that I must be sure that I really intensely desired to do scientific work, because if I went into it I must make it a serious career; that he had made enough money to enable me to take up such a career and do non-renumerative work of value if I intended to do the very best work that was in me; but that I must not dream of taking it up as a dilettante. He also gave me a piece of advice that I have always remembered, namely, that, if I was not going to earn money, I must even things up by not spending it. As he expressed it, I had to keep the fraction constant, and if I was not able to increase the numerator, then I must reduce the denominator. In other words, if I went into a scientific career, I must definitely abandon all thought of the enjoyment that could accompany a money-making career, and must find my pleasures elsewhere.

After this conversation, I fully intended to make science my life-work.

Lessons to Learn from Teddy and Questions to Consider

Spending less than you earn is an underlying principle here

If you choose a low-paying career path, you are also choosing a comparatively low-spending life Not long ago, I had a job as a researcher in a lab. I viewed it as my career and planned to eventually work on a Ph. D. while I worked there, but I hadn’t earned that degree yet. Instead, I was earning a salary appropriate for the path I had chosen. Yet, quite often, I would get caught up with spending on a level with some of the professors around me, even though they were making twice my salary. It was simply not sensible or sustainable.

When I did get my spending under control, I found myself actually in the opposite boat – I was spending a lot less than I earned. Then I made a difficult choice – I jumped to a job (writing) that paid substantially less than I was making. This, again, lowered what we could spend.

Even with that reduction in income, I felt I gained quite a bit more than I lost in that transition. I moved to writing, something I’d always dreamed about doing and something I thoroughly enjoy. I work from home, which means I don’t waste time (or money) on commuting. Most important, though, my schedule is really, really flexible, giving me more time to spend with my family when they need me and also to chase other pursuits.

There’s much more to a job than the salary. Are you happy doing what you’re doing? Do you actually enjoy the work? Is the schedule flexible enough to let you enjoy the things you want? Those things have value – for me, they carry quite a lot of value.

What about my own children?

Is it okay, if I’m in a very financially strong position, to give financial help to my children if they choose a career path that doesn’t earn much at all? I’ve often wondered about this question. If my child devoted his or her life to social work or some other low paying career, but showed obvious deep passion about it and was really making a difference with his or her work, should I support that child financially, at least in part?

To be honest, I haven’t come to a satisfactory answer to that question. I see both sides of the coin. One solution that I quite like came from an old friend, whose parents were giving one low-income child their inheritance early, doling it out over time and noting it with regular updates to their estate plans.

Here’s the real truth revealed by this quote, though: chasing the high salary isn’t everything. If you’re making a career choice, don’t let the income be your primary deciding factor. If you choose a career where income is the big calling card, you’ll wind up regretting it.