Interest-Only Mortgages Are Making a Comeback

Interest-only mortgages are back, a return which many people will likely regard with some anxiety. After all, weren’t interest-only loans one of those toxic mortgage products that led to the financial meltdown?

Well, yes — but let’s not throw out the financial baby with the financial bath water. There’s a huge difference between today’s newly-minted interest-only loans and the products marketed before the mortgage crisis erupted.

Interest-only loans can be used to acquire a home or second home, for a rate-and-term refinance, or for cash-out refinancing. The attraction is that they allow buyers to finance or refinance using a mortgage with a minimal monthly cost. The usual monthly expense for “principal and interest” is reduced because no principal is being paid during the loan’s start period.

Once the start period ends, however, the borrower must repay the loan over its remaining term. A 30-year loan might have a 10-year start period and then a remaining 20 years to repay the debt.

Since the repayment period is shorter than the original 30-year loan term, monthly payments in the payback period — which now include both principal and interest — will go up dramatically.

United Wholesale Mortgage has been in the news with an interest-only product it offers through mortgage brokers, small banks, and credit unions. To qualify, borrowers need:

The loans are 5/1 adjustable rate mortgages (ARMs), and use the 1-year LIBOR index to determine interest levels. Borrowers may prepay the loans at any time, in whole or in part, without penalty. But is it a good idea?

Interest-Only Loans by the Numbers

Alternatively, let’s say Borrower B takes out an interest-only mortgage at 4% with a 10-year start period. During the start period he’s only required to make payments on the interest. His cost per month is $667 during the first five years – before the loan becomes a 1-year ARM. The payments are $288 less per month, or $3,458 per year during the first five years, for a total savings of $17,290.

However, while the interest-only Borrower B pays significantly less each month, his loan balance remains $200,000 after five years. Borrower A, with the fixed-rate mortgage, has in that time reduced his loan balance to $180,895, building up $19,105 in additional home equity.

In the second five years of the loan, Borrower B is still only obligated to make interest payments — however, now the interest rate adjusts annually, so the monthly payment might rise or fall.

After a decade of principal-free payments, Borrower B now has 20 years remaining to pay off the debt. Once the start period ends, if the going interest rate is 6%, then his new monthly mortgage payment (which now includes both interest and principal) will be $1,432.86 — more than double his monthly payment from the first five years. What’s more, the loan balance is still $200,000, and he’s only now beginning to build some equity.

So borrowers who hold on to an interest-only loan won’t build up equity at first (at least, not beyond any increase in home values) and will face significantly higher payments once the start period ends.

However, according to Freddie Mac, the typical mortgage now lasts 5.6 years before being refinanced, meaning many borrowers — at least in this low-interest rate climate — are likely to never face the steeper monthly costs built into interest-only mortgages.

In looking at interest-only loans, it turns out maybe they’re not so scary after all – and for some borrowers who don’t plan on staying put very long, they may even be an attractive option.

However, make sure you understand just how high your payments could get after the start period, and remember that depending on market conditions, selling or refinancing your home can prove more difficult than you expected. 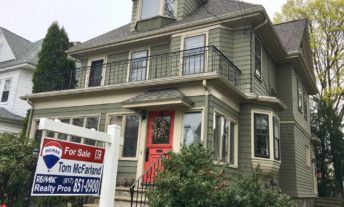 Adjustable-Rate Mortgages Are Making a Comeback – Is That a Good or Bad Thing?