A Guide to Making Inexpensive and Delicious Homemade Pizza

Homemade pizza night is a weekly occurrence at our house. For us, there is simply nothing that quite matches homemade pizza for appealing to all of us – it’s infinitely flexible, incredibly cheap, fun to make (and it gets everyone involved, even the small children), and quite delicious. Best of all, if you plan ahead a bit, it doesn’t take long to make, either – you can have a made-from-scratch pizza on the table in a half an hour if you’ve done some reasonable prep work the night before.

Here’s a step-by-step guide (along with some surprising and unusual hints) for making some great homemade pizza for your family.

For this, I’m going to make a pretty simple American-style pizza with my family’s three favorite toppings – Italian turkey sausage, turkey pepperoni, and black olives, with a mix of mozzarella and cheddar cheese on top. Here’s what you’ll need to make it yourself: 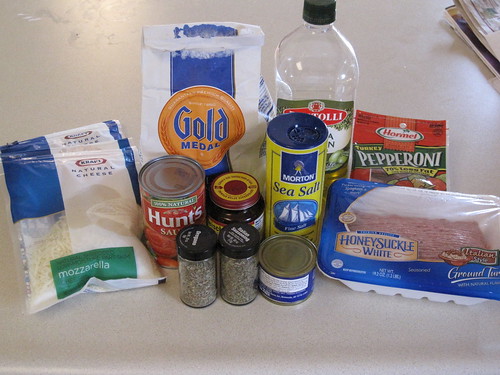 A nifty checklist for you:

What’s nice is that all of these things, aside from the toppings, can easily be found in a well-stocked pantry and refrigerator. When we want to make homemade pizza, quite often we don’t have to buy a single thing – it’s all already on hand. Even more importantly, we usually use only a tiny fraction of the items – a single container of salt, for instance, would provide enough salt for many, many pizzas. As a result, the actual cost of assembling a pizza is pretty low – my estimate for the pizza assembled here is in the $5 range since most of the items are fractionally used and the rest are picked up in bulk when they’re on sale.

You can do this the night before.

The first step in the process is making the dough. Sure, you can pick up a kit if you’d like, but it’s about the same amount of effort in the kitchen (and notably cheaper) to just do it yourself from scratch, plus you don’t have to worry about remembering the kit.

Here’s what you need: 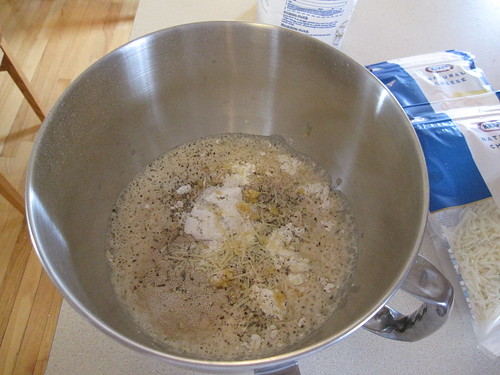 All you have to do is mix this up until it begins to form a ball. It’s much easier to do this with a stand mixer, which I’m lucky enough to have: 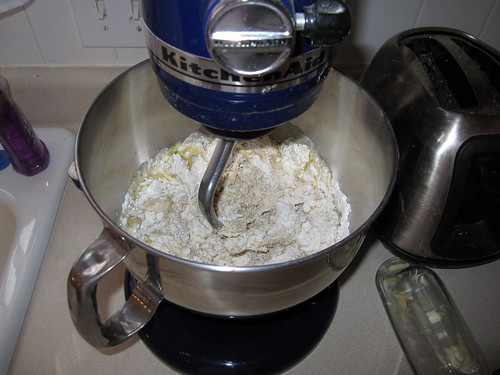 Once you have the ball, knead it a bit with your hands. Smell it. You can add more flavorful additions if you want as long as you work them into the dough right now. Here’s what my ball looks like. 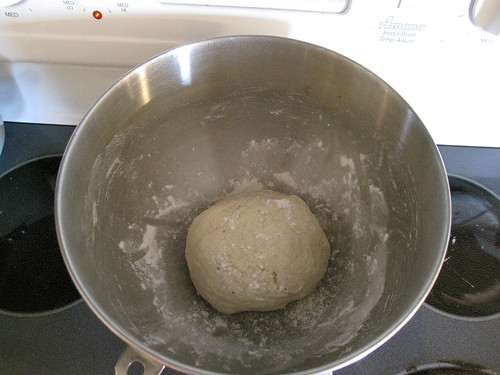 Then, when you’re satisfied (and ready to simply eat the dough right now), put it back into the bowl and let it rest in a warm, dark place for an hour or so. I usually let my dough rest on the stovetop with a towel over the top: 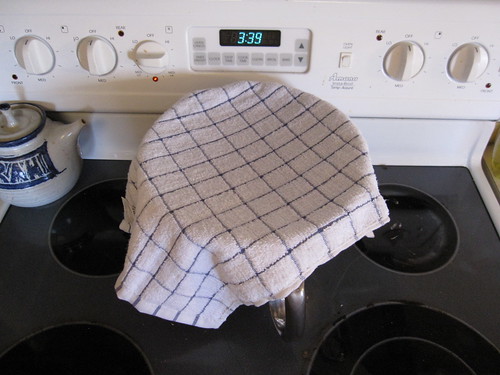 If you’re preparing the crust the night before, instead of letting the dough rise in a bowl, pat some flour on the outside of the dough ball (to keep it from sticking) and wrap the dough in Saran Wrap or a Ziploc bag with air sucked out and put it in the fridge. It will raise very slowly overnight and be perfect in the morning.

You can do this the morning before.

One big step many people skip in the pizza-making process is pre-baking the pizza crust. Baking your crust in the oven for six minutes or so before putting on toppings prevents the dreaded “doughy crust” that often is the downfall of an otherwise delicious homemade pizza.

So, preheat the oven to 425 F, get out your pizza pan or cookie sheet (I actually just use a big cookie sheet), sprinkle a healthy dose of flour all over it (or use a cooking spray like Pam if you prefer), then spread out the dough over the pan. If you want, you can toss the dough, but I often mess up the dough when I do that, so I usually just stretch it as much as I can in my hands before I put it down.

I then spread it to the edge of the pan, then roll it back just a bit to form a crust edge, like this: 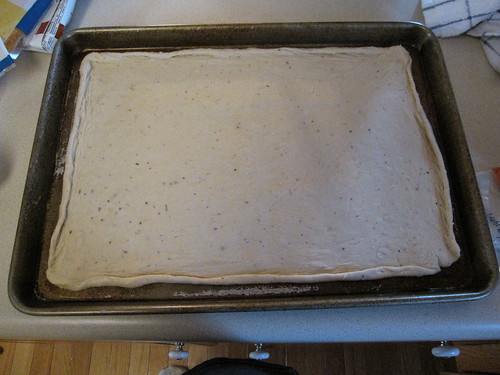 Then, just toss the crust into the oven and bake it for six minutes or so. When it’s done, there will be a few bubbles – just pop them with a fork. You can then put the crust in the refrigerator if you baked it in the morning.

You can do this the morning before.

Another thing people often do that’s a big waste of money for pizza is buying a jar of sauce from the store. For less than a dollar, you can make an awesome sauce at home. 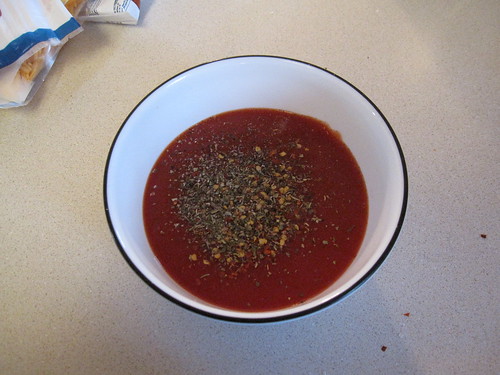 However, I strongly encourage you to experiment. Try more oregano, more black pepper, red pepper flakes, parmesan cheese, garlic, basil, parsley, onion powder, or rosemary. Add some of everything you like, stir it, taste it, then add some more. Don’t be afraid to play around.

Once you’re happy, you can store the sauce in the refrigerator all day – or you can go right ahead and start assembling the pizza.

Assembling and Baking the Pizza

You have the crust done. You have the sauce ready to go. Now comes the fun part – assembling and baking the pizza.

The best part about the toppings is that the kids can get involved. My son can spread sauce, sprinkle cheese, and toss on toppings – and even my one year old daughter can help a bit.

Pizza Tip #3 When you’re finished assembling the pizza, sprinkle some oregano on top of the cheese just before you toss it in the oven. It brings out the flavor of the cheese like nothing else. 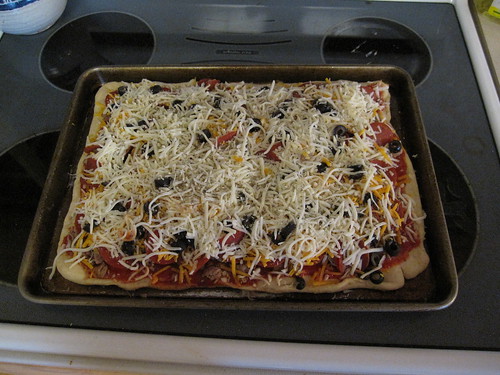 I bake pizzas in the oven at 400 F for about sixteen minutes, then check them to see how done they are. Depending on the amount of toppings (and whether the crust was cold to begin with), I may have to add a few minutes to the baking time. 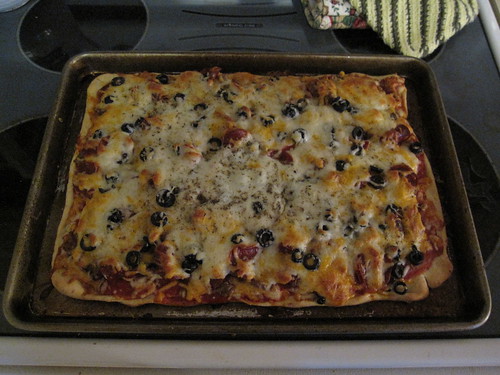 … and all that’s left is to slice it up! We slice this pizza into twenty four small, roughly square shaped slices and we usually get through twelve of them at mealtime, leaving half of the pizza for lunch leftovers for the next day or two for my life. Not bad at all for a family meal that everyone can help with that costs only $6 or so.

Good luck! (And leave your pizza tips in the comments!)

For other inexpensive and delicious recipes and ideas, check out tips for making breakfast and your own homemade bread!