How to Create a Deal-Finding Homepage

I love keeping an eye out for bargains. I’m the type of person who will come up with Christmas present ideas for people in March and spend nine months sitting on that idea, waiting for the right price to come along. I won’t hesitate in the least to jump on obviously exceptional bargains in areas I’m familiar with – video games, for example – because, if nothing else, I can usually trade or re-sell them at a profit.

The only problem is that chasing bargains like this takes time – time I don’t necessarily have. I used to have a routine of visiting a number of bargain sites, but after a while, I found more and more useful sites and it became harder and harder to keep up with all of them.

So I found a better solution (which I’ve hinted at in the past). Using a number of easy-to-use online tools, I built a single webpage that shows me the best deals from tons of different online sources all in one place, customized to show me just the deals I want. Better yet, I can access this page from any computer.

A Step-By-Step Guide to Creating a Deal-Finding Homepage

iGoogle is quite nifty. To put it simply, it lets you create a custom web page that is automatically updated with whatever you want to add to it – news, sports scores, weather, stock tickers, and so on. Here’s the URL:

When you first visit the URL above (and sign in, if you have a Google account), you’ll get a small handful of default “gadgets.” Get rid of these so that you have some space to add more useful stuff. First, click on the down arrow on the left (seen below) and choose the option to “Edit this tab…”

Then, click on “Delete” for all of the gadgets and then click on the “Save” button in the upper right. You’ll go back to an empty iGoogle page, ready to be loaded up with some great gadgets for bargain hunting.

So, how do you actually add new things to this page? This is similarly easy. Just click on the “Add stuff” link over on the right hand side of the page…

… then click on the “Add feed or gadget” link on the right. 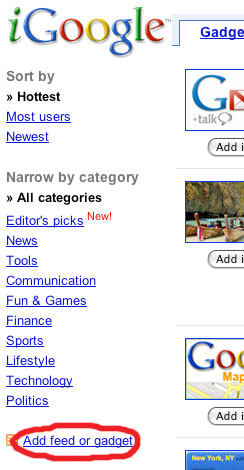 You’ll get a little popup box that asks you to paste in a feed URL. Once you do that, the contents of that URL will be added to the iGoogle homepage.

But what URLs can you add? There are lots of great URLs out there loaded with bargains. Let’s go through a few.

Below, I’ve listed ten different feed URLs that you can copy and paste directly into iGoogle, as described above. Just copy the URL below, paste it as described above, and it becomes an automatically updating part of your iGoogle homepage.

If you use a feed reader, you can subscribe to any of these (likely just by clicking through, depending on how your system is configured):

http://rssfeeds.s3.amazonaws.com/goldbox
This lists almost all of the daily deals available from Amazon.com.

This lists deals posted on Twitter, filtered by the users of CheapTweet.com.

http://www.coupons.com/rss.asp
This lists the latest coupons from Coupons.com, most of which are for discounts on household products.

http://content.dealnews.com/dealnews/rss/popular.xml
This lists the most popular deals discovered by Dealnews.com.

http://feeds.feedburner.com/dealspl/all
This lists a huge number of deals on a wide variety of products, filtered by social bookmarking sites. This is definitely one worth filtering (see below) because a lot of stuff comes through.

http://feeds.feedburner.com/SlickdealsnetFP
This includes a wide variety of deals from many sources, all filtered by the SlickDeals community. This is definitely one worth filtering (see below).

http://www.woot.com/Blog/Feed.ashx
This is a daily tech deal site that often has amazing bargains.

A few months ago, I mentioned that there are many useful people on Twitter worth following for the deals they post. If you’re not into Twitter and would rather “follow” these people in another way, you can keep track of the posted deals using this iGoogle technique. Here are the feed URLs for seven Twitterers I mentioned in the article.

http://twitter.com/statuses/user_timeline/17331003.rss
A wide variety of deals of all types.

http://twitter.com/statuses/user_timeline/17545909.rss
An aggregation of many of the best deals posted to Twitter.

http://twitter.com/statuses/user_timeline/17248079.rss
A great collection of deals on books.

You might find that all of these things are overkill – you can’t possibly keep track of hundreds of deals a day. If that’s the case, it’s quite easy to simply filter them, focusing in on the specific items you’re looking for.

FeedSifter.com lets you put in a RSS feed URL (like the ones above), then filter it for any list of terms you put in, then gives you an output feed that contains only the items that match the terms you listed. I actually described using FeedFilter once before, to similar ends.

Let’s see this in play. I like to use Amazon’s Gold Box (described above) for certain types of bargains: video games, cookbooks, and a few other odds and ends. I don’t have time for – and don’t really care that much – about the other deals that Gold Box might give me. 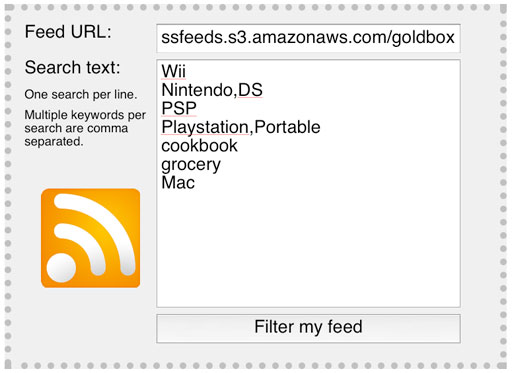 A quick note: search terms fewer than three characters match everything, so use ones longer than that.

When you click on the “Filter my Feed” button, you’ll get an option to subscribe to that new feed. Click on that and you’ll find that the Amazon feed is now filtered for those search terms. Copy THIS URL and add it to iGoogle as described at the top of this post, and you’ll be able to see the latest deals, filtered to your specifications, whenever you want.

You can filter ANY of the above URLs in the same way using FeedFilter. Personally, I filter some feeds (SlickDeals) and don’t filter others (AmazonMp3).

I have a nice big page built on this technique that I visit several times a day. Perhaps once a week, I’ll find something worth picking up – but when I do find something, I’m usually saving quite a bit on that item.

Give it a try! It takes a bit of time to get such a page set up, but once you’re set up and ready to go, it can be a big help when you’re looking for Christmas gifts or for specific bargains for yourself.