An Advanced Degree Can Help You Earn More Money – and Spend It All, If You’re Not Careful

For many college graduates, an advanced degree is a one-way ticket to earning more. By working beyond a bachelor’s degree, new graduates can climb the corporate ladder, move into middle or upper management, and perhaps score a higher-ranking position at a new firm.

While not all jobs that require advanced degrees pay enough to justify the cost, the difference between median earnings by educational attainment is truly staggering. As the U.S. Bureau of Labor Statistics (BLS) notes, median weekly earnings for professionals with a bachelor’s degree worked out to $1,137, and that number increases when you add more letters after your name: Individuals with master’s degrees earned a median of $1,341 a week, those with a doctoral degree earned $1,623, and those with a professional degree (such as a medicine or law) earned a median of $1,730 a week.

While a higher income is almost always a good thing, earning more doesn’t necessarily mean you’ll do better financially. And in the words of Notorious B.I.G., mo’ money sometimes means mo’ problems – whether in the form of student loans, overspending, or unnecessary debt.

A recent study from LendEdu illustrates the fact that individuals with advanced degrees tend to spend more on big-ticket items and rack up more credit card debt along the way.

For example: Those with a Master of Business (MBA), Doctor of Philosophy (Ph.D.), Juris Doctor (JD), or master’s degree had the most credit card debt among college degree-holders in 2016. Here’s how those numbers played out, according to LendEdu: 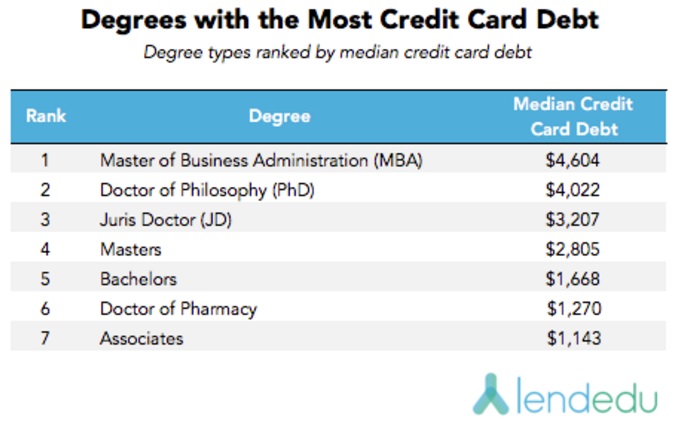 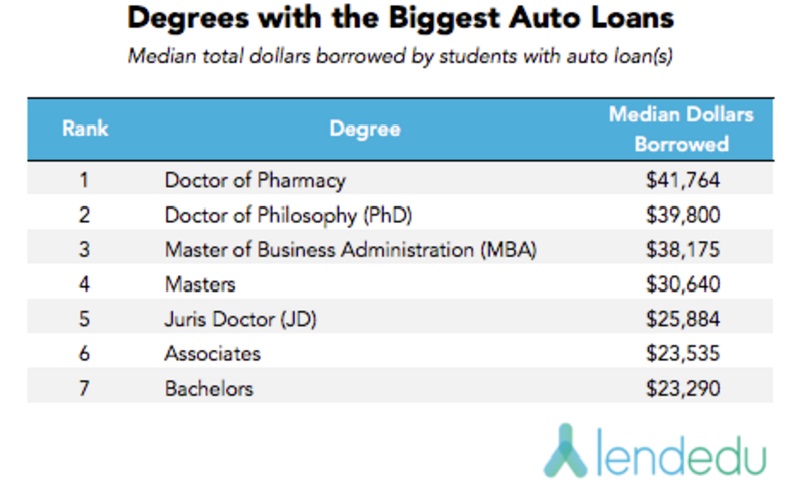 Lastly, those with advanced degrees took out much larger mortgages than their less educated peers last year – and it’s not even close. 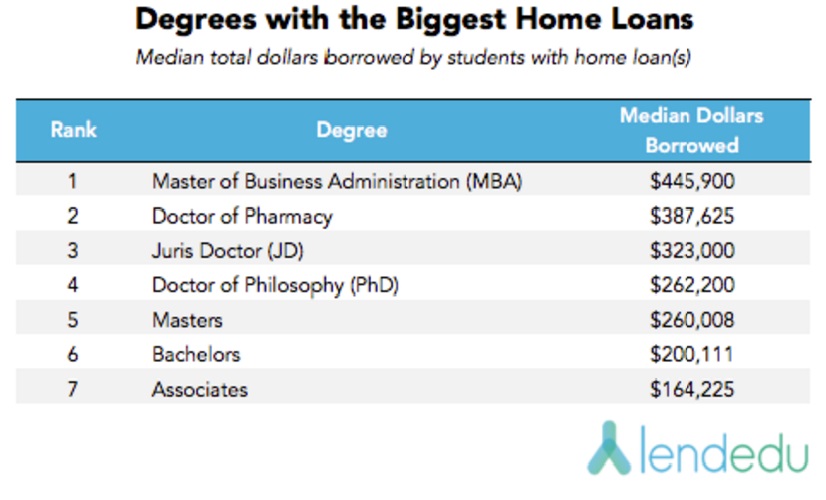 Even though individuals with a master’s degree earned only slightly higher median wages than graduates with a bachelor’s degree in 2015 ($1,341 vs. $1,137 weekly, respectively), MBA graduates borrowed more than twice as much for housing last year. Perhaps they’re simply more likely to live in expensive cities where Fortune 500 companies are headquartered – but there could be more to it.

An advanced degree might lead to a higher income, but that alone doesn’t mean you’ll get rich. Since a high income, steady job, and good credit score gives you more access to cheap credit, earning more can easily lead to a lifestyle that requires more debt and spending than most people can handle.

At the end of the day, there are myriad reasons high earners and those with advanced degrees justify spending more and taking on more debt. Here are a few of them.

You want to ‘look the part.’

When you worked hard in school to become successful, it’s only natural to feel the need to prove you’ve “made it” once you’re able to. This is especially true for advanced degree-holders who work among other high-earning peers. Landing a prestigious job working alongside other overachievers makes it far too easy to think you need the big house and the expensive car right away.

Some careers may even require you to look successful. If you’re a lawyer who deals with high income clients, for example, it’s only natural to want to upgrade from your college-grade Toyota hatchback so you can look the part. If you’re a financial advisor, on the other hand, you might feel like you need to have a nice suit, big house, and fancy car just to show you’re living the dream you sell.

A higher salary has a way of obscuring the constant strain debt places on our lives. The more you earn, the easier it is to accept that you can’t quite cover that $4,000 credit card bill yet – or that your new car payment is well over $600 a month. You’re good for it, right?

Earning more makes it seem perfectly reasonably to borrow four to five times your salary for a home, and to spread your mortgage out over 30 years or more. With a high income, you’re confident you’ll be able to pay it off eventually. So, why worry?

You feel more secure in your job.

One huge benefit of earning an advanced degree is that you’re less likely to be unemployed. When you’re fairly certain you’ll never be without a job for long, it’s much easier to spend without fear – and without limits.

In 2015, the unemployment rate among adults with a doctorate was just 1.7%, according to the BLS, compared to 8% for those without a high school diploma. Professional degree holders were even less likely to be jobless, at 1.5%, and more education generally correlated with lower rates of unemployment at every level.

You want to enjoy the rewards that come with hard work.

Earning an advanced degree can take a decade or longer, so it’s no wonder many new graduates count down the days until they can enjoy the spoils of their hard work. Maybe they’ve watched their friends build huge homes, book luxury trips to Bora Bora, and buy designer furniture for years. With their brand new and upgraded incomes, they believe it’s finally their turn to splurge.

The final reason many people with advanced degrees overspend might be the most important: The fact that you earned an MBA or a Ph.D. doesn’t mean you’re good with money.

There’s a reason neighborhoods with expensive luxury homes still have their share of foreclosures, and even those who earn six figures or more still file for bankruptcy. Earning a big income doesn’t mean you have the first clue about how to save money, budget your income, or invest for the future. And in many ways, a high income can exacerbate any financial problems you do have.

If you have an advanced degree and a high income, you’re probably aware of the challenges you face when it comes to growing wealth. On the flip side, earning an average or lower income might make it feel like you’ll never get ahead.

Fortunately, the basic financial principles that help people build wealth are the same for everyone. To create a prosperous future, you should spend a lot less than you earn, pay yourself first, and try to avoid debt when you can.

No matter what your paycheck looks like, these basic financial principles will help you grow wealthier over time. But with a high income and an advanced degree, you have the potential to reach your goals even faster – as long as you don’t blow all the extra money on stuff you can’t afford.

Do you think more money leads to more problems? How do you overcome lifestyle inflation as your income grows?