An Interview With Amy Dacyczyn 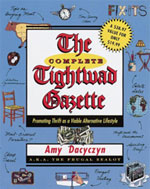 When I was first going through my financial turnaround, I was heavily inspired by Amy Dacyczyn’s The Complete Tightwad Gazette, not only as a person discovering frugality, but as a writer. As I said in my review of the book, “Highly recommended, and the single best book on frugality I’ve read, bar none.”

The Tightwad Gazette was a newsletter written by Amy in the 1990s, with the last issue going out in 1996. I saw the newsletter a few times when it was in print, but I didn’t really dig into it until later on, when I was in bad financial shape and I turned to my local library to find out ways to help me out of my debt crisis. There, I found The Complete Tightwad Gazette, and it was a revelation – a thousand page tome full of ideas on how to save money, conveniently written in bite sized pieces almost like blog postings. Needless to say, I ate it up and was duly inspired, not only as a person looking to save money, but as a writer, too.

It was a great privilege for me to get to interview Amy, who has inspired me in many ways over the last few years. Since our conversation went on for a very long time and touched on a lot of topics that are way outside of the range of this blog (the publishing industry, etc.), I’ve just selected several of the most relevant pieces for your enjoyment.

What have you been up to over the last ten years since you stopped writing The Tightwad Gazette?

I’ve done a lot of different things. For about six years, I ran a church thrift shop on a volunteer basis a couple of days a week … I kind of burned out doing that. Other than that, I’ve mostly spent my time taking care of my kids, maintaining my house, and doing much of the same things I wrote about in The Tightwad Gazette.

Are you familiar with the waves of people online who write quite enthusiastically about frugality, essentially recreating The Tightwad Gazette’s philosophy online?

That’s something I’ve picked up on in the last year or so. When I retired, I really, really retired and I haven’t been out looking at what’s on other websites and I haven’t gone out looking to see what others are saying about me on websites. I was actually surprised to discover that there are people out there still writing about frugal topics with a hardcore passion and sharing it so openly.

That was absolutely intentional. When I was writing the newsletter, I didn’t ever repeat any material, but I knew that the material had a lot of archival value. Once I started publishing the books, which were basically compilations of the articles from The Tightwad Gazette newsletter, I knew the newsletter would have a finite life span – that I wouldn’t just start repeating articles and sending them out again. The decision to do books was made so that they would be around for the long term in libraries and other places and it would be free and accessible to anyone.

One librarian in Maine says that The Complete Tightwad Gazette is the most frequently stolen book in the Maine library system!

Have you ever considered writing The Tightwad Gazette again, perhaps in online form? I think it’d make a killer blog.

No, no. I’m really retired. Every once in a while I run across something that I think would be a cool topic and I wish I were still writing the newsletter, but there’s not that much that I’ve come across that’s enough different from the stuff I already wrote about to make a new newsletter. It really was a grind, a lot of work … I like privacy. It was a crazy time and I’ve never really regretted retiring. After six and a half years, I was really ready to retire.

What’s the best tactic for saving money you’ve come across since you stopped writing The Tightwad Gazette?

The internet, without a doubt. There are countless ways to save money and stretch your dollar online: selling used stuff, buying used stuff you need, comparison shopping, inexpensive entertainment, inexpensive educational materials – for the price you pay for it, the internet is a spectacular bargain if you use it well.

The advice I wrote about the internet in The Tightwad Gazette in 1995 and 1996 are now embarrassingly dated – those pieces should basically be ignored today. Now, I’m online every day – I use eBay to sell stuff, get medical information, get legal information, order books through inter-library loan, and so on. I got interested in music and CD buying and selling – I used online resources to find what contemporary music I liked, then I was able to buy it through discount music sites, paying $1 to $5 per CD with shipping.

I’m a natural research – anything that interests me, I’ll go off on a tangent researching a topic and studying it for hours. The internet is amazing for that, with resources like Wikipedia – you can learn a ton and it’s all free.

I’m actually thinking of joining Netflix. It’s only $9 a month and since there’s no library in my town I have to use the state library system to get items, but I have to pay for shipping one way on that. Since we watch a lot of films, Netflix seems to be cheaper – we’re going to give it a try. $8.99 gets you six movies a month … that seems like it will fit our needs. We have a lot of free time now that our children have moved out.

I joined a gym – I can’t believe I actually joined a gym, but I have. I’m 52 now, and I found after trying a gym that it was much better at motivating me to get exercise than my home equipment was, and I need the exercise for muscle tone and so on. I tried several and found a gym that I liked – it’s not a choice I would have ever made until I could actually afford it, though. That’s the one luxury I’ve really added to my life over the last ten years.

Writing is often one of those lightning in a bottle things. There’s some combination of elements that you’ll put together that is unique and it will appeal to people for some reason. It’s not really something you can predict – it just has an appeal. Who knows? It’s just a unique combination of what you’re doing that works. If it ain’t broke, don’t fix it – but if you haven’t found it, tinker all the time until you hit upon something that works.

(A note from me here: between many of these questions, Amy gave me a lot of great advice about the grind of consistently writing good content over a long period of time, some specific advice on how to handle negative readers, and also some suggestions about publishing and various models (newsletters versus blogs and so on). One good idea that might come out of that talk: a “Best of The Simple Dollar” compilation might be a great way to keep the best material from the site around after I’ve stopped writing it at some point in the future. Many, many thanks to Amy for all of her advice and thoughts!) 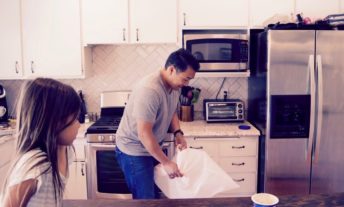