Why Buying Things on Sale is an Awful Way to Save 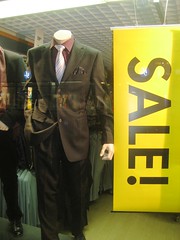 For years, I've been on a closed email list with a group of like-minded people who enjoy sharing internet links with amusing comments (think of an email version of fark or reddit). Lately, though, the list has been completely overrun by a group of about two or three people who have become completely obsessed with bargain hunting for stuff.

On an individual basis, the messages are innocuous. For example, one recent email was for Heroes: Season 1 on DVD for $29.95, a pretty strong price. Given the people on the list, of which a large number are lifelong comic book fans, this seems like a worthwhile thing to mention since many of them are either fans of Heroes or are potential fans of the show. If you make a splurge purchase like this once a month, it's not that big of a deal, and it's something that many people on that list might enjoy.

It culminated (for me) with a recent email to the list (emphasis added):

Thanks for the emails guys! I saved so much money this week!

I realized, right then, that this had turned into a "deals" list, so I unsubscribed.

A Look at Bargain Hunting

A lot of people might read through those prices and think, "Wow! Nice deals!" For the most part, they are solid discounts on what you'd normally pay, and if you were already thinking of buying one of those items, it's probably not a bad time to go ahead and pull the trigger.

The key part, though, is "if you were already thinking of buying one of those items." When you go "bargain hunting," you're not seeking out a particular item that you need. You're simply seeking out low prices and accumulating stuff for the sake of accumulating stuff. And, even though an individual item might be a bargain, buying a bunch of items is a sure way to empty out your pocketbook and make it difficult to make ends meet.

Doing that leaves you with a house full of stuff you didn't really want and a nice big fat credit card bill.

That's not to say there isn't a role for bargain hunting - there is. But when people snap to attention and pull out the wallet when they hear the word "sale" or see a big discount, they're going at it completely in reverse.

The sensible way to bargain-hunt is to know exactly what you want before you even start looking. If you've decided, on your own, that you do in fact want Heroes: Season 1 for your own entertainment, great.

Now's the time to bargain hunt, with the item you already have in mind. Utilize tools for finding it, like this clever trick for automatically bargain-hunting Amazon for specific items. Use price comparison tools to find the item at a steep discount. Set up saved searches on eBay and check them regularly. Check out retailers and see what their offerings are like.

The important part is to put on your blinders and ignore other items. A big sale on an item you don't really want is still a waste of money.

One of my online acquaintances - a person I've mentioned a few times recently - makes his living selling trading cards online. He actually does very well at this. But he also bargain hunts quite often without any specific item in mind.

See, he happens to be a walking encyclopedia of trading card prices, and he'll often go to different places simply canvassing for bargains. He has nothing in particular that he wants to buy, but there's a chance he'll stumble upon something that is genuinely mispriced. If he finds it, he'll actually clean the store out of the item. He's put more than $2,000 worth of trading cards on his credit card in one swoop when he didn't intend to buy a single thing.

The difference here is that he's not buying "stuff" to accumulate for personal use. He's bargain hunting without anything specific in mind, sure, but when he's buying the trading cards, he's not actually buying trading cards. He's buying goods to profit from - and he will profit from them.

In other words, using "well, I'll make a profit" as a bargain hunting excuse only really means anything if you're actually doing it. If you see an item you don't need and didn't really want, but you buy it because you think it's actually worth more than the price, you're still wasting money. The only way it's actually worth more than the price is if you can actually sell it at a higher price.

The simple truth is this: if you're buying something you don't really need and didn't really want before you saw it, you're wasting your money (unless, as I mentioned, you're going to directly profit from it). It doesn't matter how good the "deal" is - if it's something you weren't planning to buy anyway, you're just throwing away your money for stuff, and that's a sure way to put yourself in a worse financial position.

By all means, buy some fun stuff for yourself. Just spend some time thinking about what you actually want - and then hunt for bargains on that item.