Christmas Inspiration from a Stick and a Cardboard Box 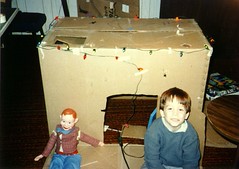 Late last week, a rather amusing story made the rounds in the mainstream media: the humble wooden stick had been inducted into the National Toy Hall of Fame.

Usually such stories are tossed out there into the news to give people a lighthearted moment in between more intense and often downbeat stories, but this story gave me pause. In an age where many of the toys targeted towards children are fairly expensive and seem to only hold their interest for a few minutes, what toys have really stood the test of time?

I spent some time looking at the list of toys in the Toy Hall of Fame, and I was actually rather impressed – and inspired. I didn’t really expect this little investigation to turn into an article for The Simple Dollar, but when I started digging in, I had something of an epiphany: there were a few profound patterns in the toys in the Hall, and those patterns point straight towards good patterns for frugal parenting.

A few of the toys were basically free. You can find a humble wooden stick in the yard. Many items that you buy come with a “free” cardboard box. It’s also fairly easy to make a homemade kite, homemade Play-Doh, or homemade Silly Putty. None of those items – all of them classic toys – require much expenditure at all.

Almost all of the toys were open-ended. There’s not a set way you can play with most of the toys – they don’t have an obvious, specific way to play. Instead, a child must bring some imagination to the table – and when they do that, there’s a huge abundance of replay value in these toys. The stick and the cardboard box are just for starters – crayons, alphabet blocks, Erector sets, LEGOs, Tinkertoys, and several other items on the list fall into that category.

Most of the toys are sturdy – and thus likely to be found at yard sales. Items like alphabet blocks, Etch-A-Sketches, hula hoops, jump ropes, marbles, and skateboards are often easily found at yard sales and are passed down from child to child, generation to generation. Why? They’re sturdy – it’s hard to break them during normal play.

So, what’s the message here? Most of the “great” toys on this list are also frugal toys as well. A child is much likely to get more intellectual growth out of a box of crayons and a big pad of paper than they ever would out of a $20 toy that lights up and makes noises. The noisy toy might get a bit more attention at first, but over the long run, that box of crayons will become well-worn while the noisy toy gathers dust in the corner.

This Christmas, when you go to buy gifts for the children on your Christmas list, think carefully about the Toy Hall of Fame – the toys that are truly timeless. They’re not the ones with the big price tag. They’re not the toy of the moment.

Instead, they’re toys that your parents played with, that you played with, and that my own kids are playing with right now. They’re the ones that children are drawn to over and over again, because they let their imaginations roam instead of just responding to the push of a button.

The best part is, they come with a very low price tag.

Instead of getting your child or your nephew some expensive toy this Christmas, get that child some crayons and an end roll of newspaper to draw on and then spend an hour drawing with that child. If you’re a parent, package one of your gifts in a big cardboard box – likely, your child will have more fun with the box than with the gift.

In short, give a little more imagination and spend a little less money. If you really feel obligated to spend that money, make a donation to the child’s 529 in addition to the gift.

As for us? Our two kids are receiving at least three of the items from the Toy Hall of Fame this Christmas. I can’t think of a better “wish list” to start from.