Cloth Diapering: Does It Save Enough Money To Be Worth The Extra Effort? 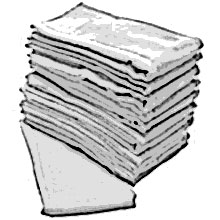 My wife’s best friend is a very strong environmentalist – in fact, she’s often the inspiration for the more green-tinged posts on The Simple Dollar. When she discovered she was with child several months ago, she decided that she was going to use cloth diapers instead of disposable ones. We asked her to let us know how it was going in terms of cost and effort, because we were somewhat considering the idea for our second child after seeing how her experience went.

Recently, she told us about her experience. I jotted down some notes and here’s the scoop on cloth diapering.

Buying the diapers If you have social connections, ask around for any used cloth diapers. Many parents who have abandoned them or have had their child grow out of them will be glad to give them away or sell them at a very cheap price. Our friend reports that between cloth diaper gifts at the baby shower and an abundance of them given to her by a friend whose daughter grew out of them, she didn’t have to buy a single diaper. You’ll also need several waterproof covers (to keep in the liquid and have the cloth diaper absorb it). The cloth diapers work all the way through, but the waterproof covers vary in size – you’ll have to get a new batch of these a few times through.

So, the costs vary widely depending on what you can get as a gift, borrow, buy used, and buy new, but the investment can be quite low.

What’s the “best” brand? BumGenius comes recommended by tons of different sources for simplicity and cleanliness, but they’re very expensive. A BumGenius or two is a great baby shower gift for an expectant mom, even if that mom doesn’t plan on using cloth diapers. Why? A BumGenius is basically a cloth duplicate of a disposable diaper. Our friend has a small number of these and she claims to save them for nighttime changings because they’re incredibly easy.

How many do you need? From my own experience, newborns go through as many as a dozen a day, so at first, you should have a dozen for the number of days you want to have between laundry loads of diapers. As the baby gets older, (s)he will not go to the bathroom as often, but at some point you’ll have to start double diapering because of the greater liquid production from the child.

What about cleaning? Obviously, some of the cost savings from disposables are eaten by laundry, but you’re only paying with it with a bit of time, some water, and some laundry detergent. The strategy that was described to me was to wash the poopy diapers alone first with cold water and detergent, then add the wet diapers and run another load with hot water and detergent, then run it through a rinse cycle again with a half-cup of vinegar in the water (for odor removal). Then just dry them like normal clothes. If you estimate that you have a water cost of $0.05 a load, a power cost of $0.09 a load (both washer and dryer), a half cup of vinegar costing $0.10 or so, nd a detergent cost of $0.03 a load (using my science fair tested homemade laundry detergent), cleaning three dozen diapers costs about $0.50.

Does cloth diapering save money? You’ll pay about $0.20 a diaper for disposables, which equates to a cost of about $7.20 per three dozen diapers. After startup costs, you spend only about $0.50 per three dozen diapers. You’ll repeat this about fifty times before potty training begins, so the total diaper savings is $350 or so with cloth diapers. Of course, your startup costs aren’t included here. For example, if you were to buy three dozen brand new BumGenius diapers, they would cost you about $500, but they make cloth diapering as convenient as disposable diapering.

In short, buying new cloth diapers for a single child isn’t financially worth it, but if you have the ability to get used cloth diapers on the cheap and/or you plan on having multiple children, cloth diapers can easily recoup your investment and save money. There is additional time required for cloth diaper cleaning, but the tasks are simple and relatively minimal.