Commuting by Car, Uber, Train, Bike, or on Foot: Which Saves the Most Time and Money?

When I moved to San Francisco, I sold my car. I knew I’d be living in a walkable city, and the high cost of ownership was no longer justified. I decided that I could use on-demand car services such as Uber to get around the city when I needed a ride in a pinch. I figured that since I’d be spending the majority of my time within the same five-mile radius, it would be cheaper to walk, bike, and Uber around town than it would be to own a car.

But just to be sure, I decided to run the numbers.

The average cost of my last 20 Uber rides was $11 a pop. (The national average is $13. I’m keepin’ it frugal, baby!) I average about five rides per month, which works out to $55 per month. This pales in comparison to the $724 per month it costs the average American to own a car, according to a 2015 report by AAA. I would have to use the service 65 times a month before it would make more financial sense to own a car. That would basically require me to call Ubers just to take me around the block for a distraction and a conversation.

Satisfied that I was saving money by not owning a car, my attention turned to my fellow city dwellers across the country who commute to work. Would we all be better off ditching our vehicles in favor of another mode of transportation? I decided to analyze five types of commute – driving, calling an Uber, taking a train, biking, and walking – to see what would prevail in my hypothetical San Francisco commute.

I decided to use an 8-mile round trip as my benchmark. That’s about what it would be if I commuted from my current residence to the Financial District (which is across town). Let’s break it down.

Cost: There are currently 27.4 million “Within-City Commuters,” according to a 2016 report from the U.S. Department of Transportation. These are the folks whose commute never takes them outside the confines of their city of residence. The majority of these people commute between two and 10 miles round-trip, and 76% of them drive a car. Worse, they drive a car alone.

That means most commutes involve one individual driving a short distance in a machine that weighs two tons, likely spews carbon dioxide, and is the most frequent killer of people my age. If there’s a way to do better for our health and the environment while also saving money, I think it’s worthwhile to explore those options.

That same AAA report I mentioned earlier found that the median cost to own a sedan for one year was $8,698. This figure takes into account the costs of fuel, insurance, registration fees, maintenance, taxes, depreciation (car payments), and financing (interest). That all works out to an average cost of 58 cents per mile driven. This will fluctuate based on yearly gas prices, but it’s a good estimate to go off of.

But, if you drive, you have to park. In San Francisco, that’s a killer. Unless you’re an executive with a comped parking spot, parking will run you between $300 and $400 per month. So, at a minimum, you’re looking at $393 per month to drive and park in downtown San Francisco.

Time: According to Google Maps, driving this route in rush hour would take 25 minutes one way.

Cost: An eight-mile round trip in an Uber in a major city will run you about 27 dollars. That comes out to 108 dollars per week and $540 per month.

That’s pretty pricey. But, if you don’t mind riding with a stranger (and if you’re using Uber, it’s kind of implied that you don’t) then you could take advantage of a newer service they offer called “Uber Pool”.

Selecting this option means your driver will pick up another passenger en-route who is headed to a nearby destination. This drops the cost of the ride to $5.75 per person to get pretty much anywhere in the city, in my experience.

Time: Since you’re still using a car, it should take roughly the same amount of time as driving a car (25 minutes), plus a couple minutes waiting — and maybe a little longer if you do Uber Pool and the other person is off the route a bit or hasn’t finished getting ready by the time the car shows up.

Keep in mind, though, that you don’t have to drive or “pay attention” to the road in an Uber — meaning you can do something productive with those 25-30 minutes instead of staring at the taillights in front of you.

There’s also a chance you get an ex-taxi driver who will fly through every light and pull death-defying road stunts, which cuts the time and boosts adrenaline. Maybe you’ll spend less on coffee because you’ll be so amped up! 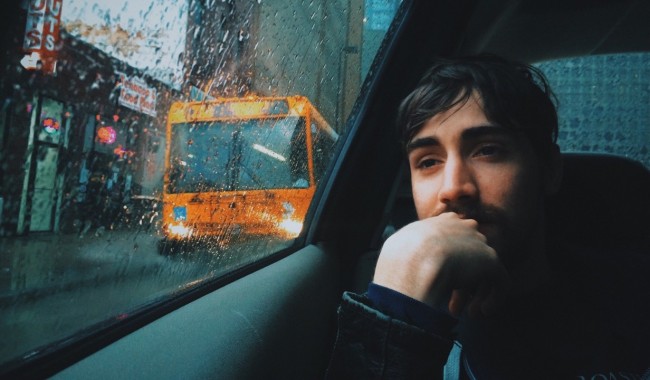 Whether it’s on the subway or in the back seat of an Uber, when you’re not in the driver’s seat, you’re free to catch up on work, call your mom… or just plain space out.

Cost: I could take the local mass transit system, Bay Area Rapid Transit (BART), to and from work for $4 total. That works out to $20 per week and $80 per month.

Time: This is not only the cheapest option so far, it’s also the fastest, taking a mere 20 minutes, even during rush hour. And that’s not even taking into account the free entertainment you get when a bunch of amateur acrobats come in and do parkour in the train car.

Cost: A bike costs about $322 to own and operate per year and carries an estimated cost per mile of about 10 cents. You can find cheap, serviceable used bikes for sale on Craigslist at all times of the year. I got mine for $100.

Time: Biking downtown would take about 27 minutes during rush hour.

Cost: Free. If you’re a real go-getter, walking is, of course, the ultimate free solution. Even at its most expensive, you might just want to invest in a pair of sneakers or good walking shoes.

Time: Walking my commute would take a little over an hour each way. Some people might scoff at this notion — who has an extra half hour to burn in the morning, when you’re already late and skipping breakfast? But it’s all about how you frame it in your mind.

For instance, most people have the intention to exercise, get some fresh air, and learn new things every day. But they often struggle to find time for the gym, personal development, and getting outdoors. Life can be hectic.

But if you walked to and from work while listening to an educational podcast, you just took care of all three tasks at once.

Your time at home would be freed up to pursue new hobbies and start side hustles, instead of worrying about taking care of your basic body maintenance. From that point of view, walking to work can actually save you time (not to mention money).

Explore What Works Best for You

I should acknowledge that none of what I discussed factors in the weather. There are also many people with disabilities or injuries that make it impossible for them to bike or walk to work.

I’m just doing all this to point out that, on the whole, driving a car daily if you don’t have to is like taking your piggy bank, lighting it on fire, and flushing it down the toilet. The same goes for using on-demand car apps too frequently. If these numbers get you to reduce your dependence on your four-wheeled friends just a bit, then it’s a victory.

Also, it’s worth mentioning that there are many other taxi, bus, van, carpool and rideshare options I didn’t mention. I used the options that made sense for this scenario, but everyone’s situation is unique. The important thing is to take some time to “think outside the car” and at least give your other options a fair shot.

You don’t have to give up your car cold turkey. Even taking one day a week to walk or bike to work could help you reap huge benefits down the road.

Let’s say you made it a goal to walk to work every Friday instead of driving. In the above scenario, that would mean a savings of $13 every Friday, and that’s not even including parking. Over the course of a year, that would put an extra $676 in your pocket.

What if you kept it up for the next five years — investing that $13 saved each Friday? At a 7% rate of return, those once-weekly walks to work would boost your retirement account by more than $13,000 after 20 years, even if you stopped putting money away after the first five years. (Keep it up for 20 years and you’re looking at more than $33,000.)

Not too bad a trade-off for a weekly dose of fresh air and exercise.

If you’re a daily commuter who’s been driving not only for convenience but because you thought it was cheaper in the long run, think again. Unless your rich uncle gifted you an electric car and pays for all the maintenance and insurance, you could potentially save some serious money by selling your car.

And if it’s the relative privacy of a motor vehicle that you love, you may be able to take an Uber daily and still save money, depending on how much parking costs in your city.

If you’re lucky enough to live in an area with good public transportation, that option could be the fastest of all and save you money when compared to taking an Uber or driving yourself. And if you’re looking to work some exercise into your daily routine and can block out a little more time for your commute, biking and walking are ridiculously cheap options that come with a multitude of additional health benefits.