Costco Without a Car

When my wife and I moved to Brooklyn, we felt lucky that we wouldn’t need to buy a car. Our apartment was close enough to a subway line and our neighborhood was walkable enough that it didn’t make sense to own a vehicle. That being the case, we had a tough decision to make about our grocery shopping habits. Specifically, what were we going to do about our beloved Costco membership? The nearest store was two miles away. We weren’t sure whether we would get enough value out of our yearly membership given the distance and our lack of a vehicle.

We decided we’d keep the membership and walk to Costco. Call it foolishness driven by an unshakeable addiction to Kirkland brand chocolate-covered almonds, but we were determined to do our bulk shopping without owning a vehicle. Turns out it wasn’t that hard, and it could actually be fun with the right attitude.

How We Made Costco Trips on Foot

There were both physical and mental hurdles to overcome before our first trip. It would be taxing to lug several hundred dollars and at least a hundred pounds’ worth of groceries from Costco to our place. We also worried it might look weird to walk the streets weighed down with so many bags. But in the end, I realized I’m the kind of person who’s willing to try all-potato diets and take freezing cold showers, and my wife is supportive of it all. Weird and difficult wasn’t going to stop us.

The first step of preparation was to get our gear ready. This consisted of grabbing a couple of backpacks and stuffing them with every cloth grocery bag in the apartment. That was it. We could have greatly increased our carrying capacity if we used a rolling bag of the type that’s popular at farmers markets, but we never got around to buying one.

My wife and I are fast walkers who quickly took to the local New York City custom of jaywalking, so the two-mile walk to the store took generally took about 30 minutes. We would then load up our cart like it was any other Costco trip, but with a couple of caveats.

One issue was that we had to be a bit more careful about how much we bought. There’s only so much weight two humans can lug. I’ve done all-out Costco trips where you get a workout just pushing your bulging cart through the parking lot to your car and unloading it. It wouldn’t be feasible to carry that much stuff back on a walk. On average, we spent $200 to $300 on food, which resulted in a challenging but manageable load to haul back.

We also chose to exclude any item that was too bulky, even if it was light and cheap, such as jumbo packs of paper towels. Things like trash cans and furniture were also not feasible to carry back.

Another consideration was the temperature. Our walk back took us considerably longer than 30 minutes, so if it was hot out we limited how many frozen goods we bought.

Barring those minor inconveniences, our trips were a success, and we executed them in all weather. I snapped this picture of my wife doing her best pack mule impression walking back through Brooklyn on a bitterly cold March afternoon: 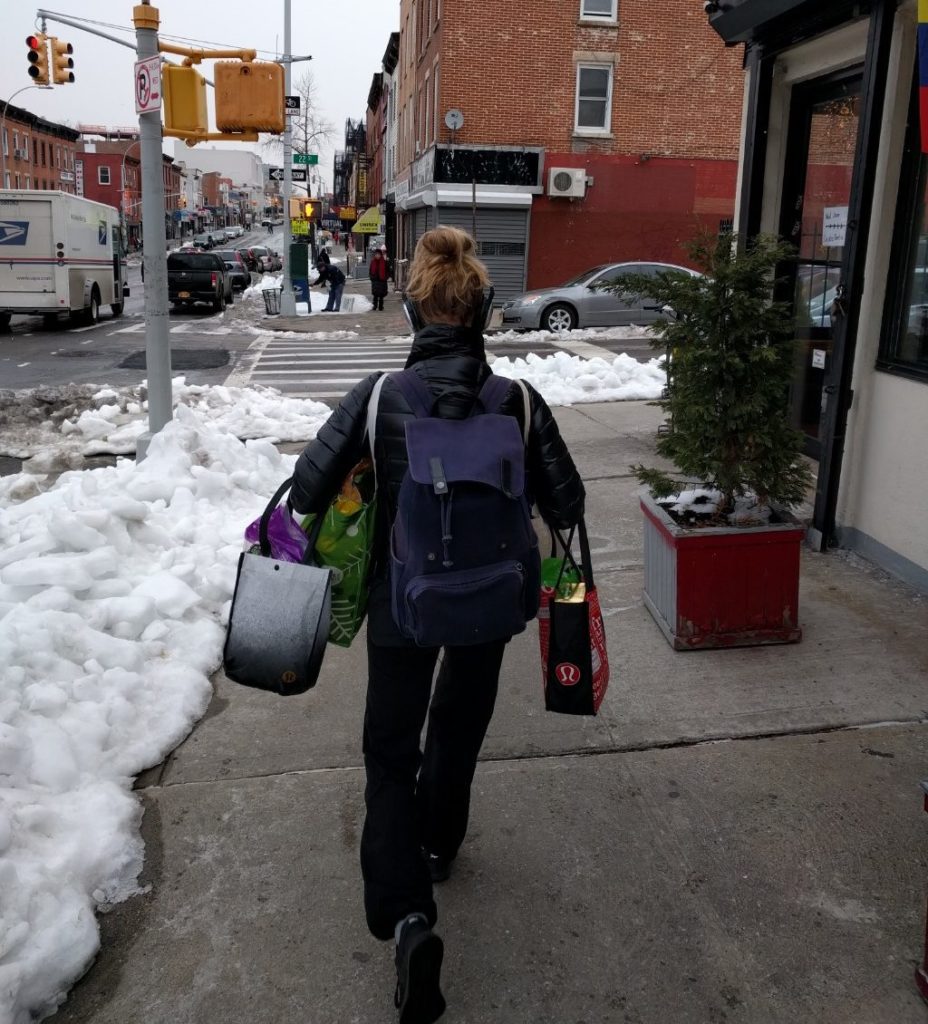 That’s four tote bags and a backpack, people! I’ve never been more in love. If I could have sent this to friends and family in lieu of engagement photos, I totally would have. But I digress.

We sometimes wore headphones and listened to the same podcast, which was a fun way to pass the time. There are tons of ways you can make the walk a team building adventure rather than a dreary slog. For example, we once took a different route to explore the city and ended up seeing a famous old cemetery that we never would have visited otherwise.

If you look at it purely from the perspective of how much you value your time, it’s hard to make the case for walking. But how do you account for the exercise, the fresh air, the good conversation, and the sense of accomplishment after overcoming a difficult task?

The exercise aspect was particularly salient. I am all about avoiding gym memberships and incorporating exercise into my everyday routine. Plus, one of the main things I do when I have access to a gym is an exercise where I pick up a heavy set of weights, hold them at my sides, and walk back and forth. It’s a great workout. Does that sound eerily familiar to another activity?

Incorporating physical activity into your everyday life that isn’t structured exercise is a good idea, regardless of whether you’re walking to Costco. It makes it easier to meet the healthy activity level guidelines set by the U.S. Office of Disease Prevention and Health Promotion. As obesity researcher Dr. Stephan Guyenet puts it, “Our distant ancestors had a word for exercise: life.”

Also, yes, I could sit in the comfort of my home and order most of the same things from Amazon or a similar store. That would save time. But what did I want that extra time for if not to spend it with my wife doing a challenging activity that gave us a story to tell and brought us joy? If you’re physically able and you enjoy walking, you can consider cutting out the middleman by getting creative with how you do your grocery shopping.

Biking, Rideshare Services, and the Subway

There are other ways to enjoy shopping at Costco when you don’t own a car but also don’t want to walk both ways.

While living in Brooklyn, we easily could have taken a short subway ride to and from Costco. It would have been a hassle getting through the turnstile with all our bulk bounty, but it’s doable. I saw people carrying large amounts of groceries onto the train all the time.

We currently live in Chicago, where our apartment is even farther from a Costco and there are no good train lines leading to the store. Walking nine miles round-trip is too much for even me to stomach, so we made a new plan: We now walk or bike down to the Costco, and pay for an Uber to bring us back.

We take advantage of a bike-share system offered by the city called Divvy Bike, so we can leave our bikes without worrying about the return trip. If you’re an intrepid bike adventurer who owns a bike with a cargo attachment like Mr. Money Mustache, you can absolutely do the whole Costco trip by bike.

An obvious advantage of using a rideshare service like Uber or Lyft on the way home is that you can buy a lot more stuff. If you’re taking advantage of one of Costco’s big-screen TV deals, for example, hailing an Uber makes a lot of sense.

Each Uber trip back from Costco costs about $12, so we have to make sure that we’re capitalizing on deals that are unique to Costco to make sure it’s worth the extra expense. Thankfully, with some pre-planning, this isn’t hard to do.

Finally, be sure to keep an eye out for deals on rideshare services. For instance, my Platinum Card® from American Express gives me $15 in free Uber credits every month (among other benefits). I rarely go to Costco more than once per month, so I now use my card to get a free ride back from the store every month.

There are many ways to enjoy the benefits of Costco without owning a car — if you’re willing to take a little more time and use a bit more energy. Walking, biking, or using a rideshare service can help you stay in better shape and save money on car ownership. It helps to have an awesome and supportive partner to go with you on the journey, but anyone with the right attitude should be able to have some fun with the process.