Dinner With My Family #11: Enchiladas, Vegan or Otherwise

Several people have emailed me recently, asking why I’m vegan. It’s not political at all. My dietitian simply recommended it based on some minor health issues that could potentially escalate into something serious. My diet (for now) is vegan with an occasional piece of fish (maybe once a week or every ten days). Eventually, I plan to move to being an ovo-lacto vegetarian (meaning I can eat pretty much anything that’s not meat). This was the hard path suggested by the dietitian, but I’d rather nip this in the bud so that I can always be around for my kids and wife. I certainly don’t “judge” those who eat meat (in fact, I pretty much don’t care); however, I do know that some people eat certain diets for political reasons and others eat them for medical reasons, so I’m trying to show inexpensive recipes that work for those people and can easily be modified for people with less-restrictive diets, since it’s easier to modify meals to be less restrictive than modifying recipes to be more restrictive.

One of my recent projects has been to go through my old collection of recipes and look for ones that had minimal animal-based ingredients. What recipes had only one or two ingredients that I couldn’t eat?

I came across one of my favorite recipes, our homemade enchiladas. I figured (without really thinking about it) that I wouldn’t be able to have them. When I actually studied the recipe, though, I realized there was only one key ingredient that I couldn’t eat – the meat.

So I decided to give it a whirl, replacing the meat with tofu. Would it work? 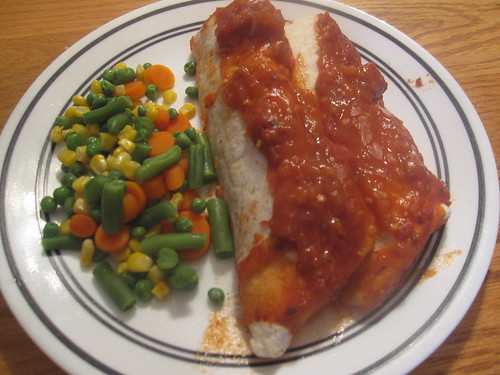 Across the board, we all thought it was quite good.

The filling is the expensive part. I purchased the tofu, onion, garlic, picante sauce, spinach, and tortillas for $8.60. This ended up making 12 enchiladas, bringing the cost per enchilada well below a dollar. It would have been less expensive with a different protein.

You can easily steam the spinach in advance. Just take out a large pot with a lid, add about a cup of water to it, then add one pound of fresh spinach. Bring the water up to a gentle boil, then cover the pot and let it sit with the water gently boiling for thirty minutes. This will wilt the spinach perfectly, and it can be saved for a couple days.

You can also chop the two onions and saute them. Chop the onions into fairly fine pieces, then put them all in a skillet with a few drops of vegetable oil and cook over medium heat until they become translucent and begin to brown. Remove them from the heat and split them into two separate equal amounts (one for the sauce, one for the filling). You can add a bit of chili powder to this if you’d like, but I don’t find it necessary. Again, the onions can be reserved for a day or two without any problems.

First, make the sauce. Just combine all of the sauce ingredients (except for the corn starch) in a saucepan and cook it over medium heat for twenty minutes or so, stirring regularly. When the twenty minutes are up, add the corn starch and water mix, stirring it in, and let it cook for about another minute. You have yourself a rich enchilada sauce. You can make this in advance as well if you’d really like, but this can easily cook while you’re actually preparing the enchiladas.

For the enchilada mix, combine all of the filling ingredients except for the spinach and the tortillas in a large pot and mix thoroughly until it’s very consistent. Here’s what ours looked like, using tofu. 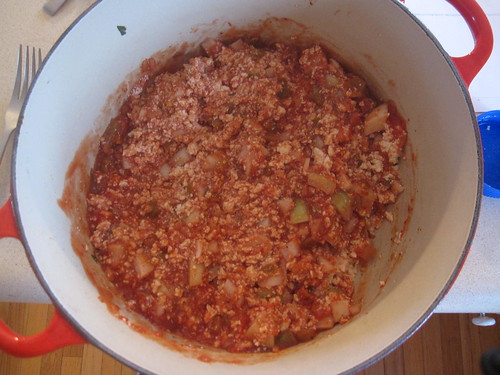 Once your mix is ready, lay out a tortilla, put a small amount of spinach in the middle, then put two or three heaping teaspoons of the filling on top of the spinach. Spread it out across the tortilla, something like this: 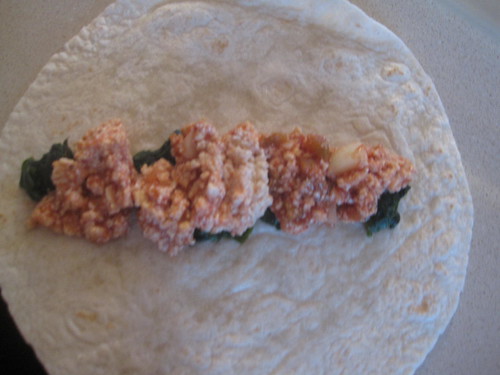 Roll up the tortilla. I usually fold it something like a burrito when I do this, as I fold in the sides a little bit, then I roll the whole thing up as tightly as I can. Put the finished tortillas in a 9″ by 13″ baking pan. It should hold 10-12 of them depending on how fat you make them.

Once you’re done with the tortillas, pour the sauce on top, then stick them in the oven for 25 minutes. Delicious! 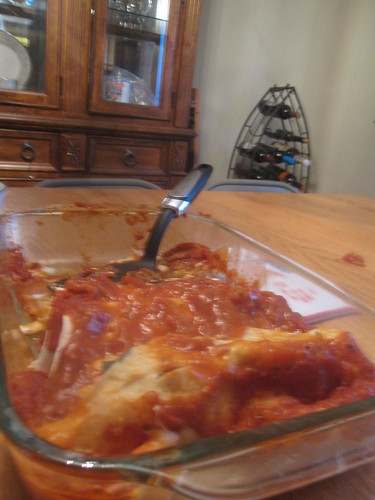 This is our pan of enchiladas mid-meal after we’d eaten several of them. Our whole family liked them. Yes, our children enjoyed the tofu enchiladas. Part of the appeal, I think, is that the other flavors and the “smashed” texture of the tofu made it largely unnoticeable.

We served it with a steamed vegetable mix on the side.

Not Vegan? Looking for Modifications? Try These Options

Obviously, you may want to replace the tofu with your meat or beans of choice. You can basically use any type of bean in place of the tofu, as well as ground beef, chorizo, chicken, steak strips, or even fish or shrimp if you so wish. Use whatever sounds good to you here – most anything will work and give the dish a distinctive character.

You may also want to put some cheese or sour cream on top of the enchiladas. Choose a cheese to your liking. With the sour cream, I recommend serving it on the side, simply because not everyone likes sour cream.

If you like it spicier, use cayenne pepper or add some stronger peppers right to the enchilada mix. My children don’t really like that level of heat, but it’s certainly easy to bring the heat here.