Overspending on Gifts? 6 Things to Think About 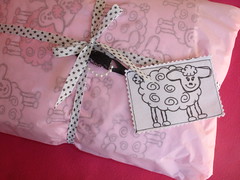 One of my readers related a story to me over a long conversation that, rather than posting a bunch of long quotes, I’m going to paraphrase.

This reader, who we’ll call Maggie, receives an over-the-top lavish gift from her great aunt each year. Her aunt loves buying the perfect gift for everyone in her family and, because she’s well off, she can afford to spend the time and the money in order to find that gift.

What I found interesting is that even though quite often the gift was a truly thoughtful and beautiful gift, Maggie reacts to it with only mild happiness towards the gift. I would have been ecstatic to receive the most recent gift – an Amazon Kindle with a $250 gift certificate to the Kindle Store – but Maggie did not.

In fact, what she felt was a mix of feelings, and most of them were negative. She knows her aunt loves her without the lavish gifts. She thinks that the money spent on the gifts would be better served going to charity or even kept in her aunt’s coffers so that she’d be okay in the event of something awful. She appreciates the gifts, but often finds much more meaning in the much less expensive gifts given to her by her mother, which are usually handmade or are extremely carefully thought out. And she also finds it difficult to relate to the life of a person who can throw around money so easily, buying everyone in the family gifts that push into the four figures for every holiday and birthday.

Maggie’s aunt has her heart in the right place, don’t get me wrong. It’s awesome that she’s so giving of what she has. But Maggie might better be served giving smaller gifts and instead perhaps putting the money she wants to give to her family into accounts for each of them, to be given when she passes away. This way, the aunt gets the joy of giving thoughtful gifts, is able to show her love through her largesse and make the recipient’s life more enjoyable, and doesn’t have to deal with the side effects.

Are you like that aunt, giving sometimes over-the-top gifts to the people you care about? You might be surprised to find out that sometimes the gift isn’t really all it’s cracked up to be, like the gifts from Maggie’s aunt. Here are six things to consider.

Overspending is not love.
Maggie knows her aunt loves her regardless of the gifts that she receives from her. This love isn’t formed under the Christmas tree. It’s formed with phone calls, afternoons on the front porch, family reunions, and big life events. Maggie doesn’t love her aunt because of Amazon Kindles – she loves her aunt because her aunt has been there for the big moments in her life and has been there for her when she needed her. That’s what love is, not stuff.

Overspending puts you at risk, and that hurts the recipient.
While Maggie’s aunt might be in a very strong financial position, many big gift-givers are not. Consider what happens if you give an expensive gift, then find yourself declaring bankruptcy soon. You’ve just given a second gift to your recipient: guilt. Your loved ones do not want to see you in a financially pinched situation where it’s difficult for you to live your own life. Don’t stretch things just so you can buy a gift that’s actually beyond your means, because the consequences will hurt both you and the recipient.

Overspending can create family rifts in unexpected places.
Imagine, if you will, Maggie’s mother. She might truly wish to be able to afford such lavish gifts as Maggie’s aunt tosses out, but she cannot. So she may feel inferior and guilty because of it. Imagine, for example, Maggie herself, who receives the items but then wonders whether the money used might not have been better used somewhere else. Little tics like that add up over time, over a period of many years where expensive gifts are sent and little bruises add up. I’ve watched it happen in my own family over similar circumstances – little, seemingly insignificant things build up and erode away a once-strong relationship.

Overspending can create inflated expectations.
Alternately, imagine one of my old school pals whose grandparents got into a routine of giving him amazing Christmas gifts. One year he received a Nintendo from them, followed later by a Sega Genesis and then the following year a computer. He loved those items, but he also came to expect something awesome from his grandparents, so when their financial situation changed and they skipped Christmas one year, he accepted it on the surface, but on a lot of levels he was hurt by the change. He had spent months looking forward to a great Christmas surprise that suddenly had disappeared. While this may seem like a greedy child, it actually was not – he didn’t actually care that much about the items themselves. He mostly felt, through the emotional lens of a child, that he had somehow done something wrong and let them down, and it really dragged him down for quite a while.

Overspending doesn’t compensate for other mistakes.
Many guys tend to try to cover up for a big faux pas by buying an exorbitant gift for their wife – it’s so common, it’s often joked about in pop culture. While the gift might be appreciated, it’s not the gift that brings about the forgiveness for the mistake – it’s the fact that the husband seems to be truly showing regret. Instead of feeling like an exorbitant gift is in order, perhaps a more direct and true showing of your feelings might actually be what’s needed – and it might save a pretty penny, too.

Overspending can send the wrong message to others.
One year, I splurged on my nieces and nephews and bought them some stellar Christmas gifts. I found out much later that other members of the family didn’t interpret these as gifts for children, but as attempts as showing other family members up by buying the “best” gifts for the kids. What was intended as a gift to make a child happy instead turned into underlying resentment and some form of “Christmas Cold War” that wound up basically eliminating our family’s gift exchanges after a few years.

If you’re tempted to really splurge on a special gift for someone, think carefully about the reason you’re doing it and the potential consequences. Not only might the purchase be the wrong financial move, it also might be the wrong choice for everyone involved, including the recipient.

Because of this, I encourage people to give carefully considered gifts, not exorbitant ones. A well thought out $20 gift for someone is almost always better than an off-the-cuff $100 gift, any day of the week.