Don’t Install Your Refrigerator Next to Your Dishwasher (25/365)

Your dishwasher gets hot. Your dishwasher also gets moist, meaning it’s harder to cool down the air around it. Your refrigerator gets cold. So does your freezer.

So many elements of frugality and personal finance come down to paying attention to the details. This is one of those little detail things that so many people will overlook, but over time it just continually costs you money. 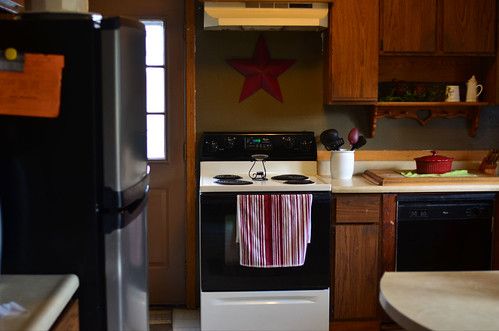 When we moved into our current home, one of the things that annoyed me about it was the relatively small kitchen. It wasn’t much larger than the kitchen in our small apartment, having only a small counter that the other did not have.

Even worse, the refrigerator was installed next to the dishwasher, and the only way to fix it would involve an extensive reworking of our kitchen, as the cabinets are all formed around slots for the appliances.

So, what can we do about this? At the moment, not much. Other than the side-by-side appliance issue, our kitchen is laid out fairly well for its size. Although we’ve looked at alternate arrangements, none of them have provided enough value to be worth the cost of rearranging things.

However, we do plan to build a new house in the future. When we do that, we’ll make sure to avoid having a “hot” appliance next to a “cold” one. In fact, in our latest design sketches (a fun project that Sarah and I work on sometimes in the evenings is doing sketches on the computer of what our dream house would be like), the refrigerator and dishwasher are pretty far apart, with a large counterspace between the refrigerator and the sink and the dishwasher on the other side of the sink.

Another thing to watch out for: avoid having your refrigerator or freezer next to an air vent, particularly if you live in northern climates. During the winter, your air vent will be blowing out hot air, which you don’t want blowing directly onto your refrigerator. This is something else to consider when designing or re-designing a kitchen, as it’s all about the energy efficiency.

Will this save you a lot of money or a little? It’s really hard to measure, as it depends on the modes you’re running in your refrigerator and dishwasher, the amount of insulation between the two, and countless other factors. However, I’d have to be oblivious to not hear our refrigerator kicking on and running almost contiunously when our dishwasher is running. If a simple kitchen design decision will make a real difference in how much your refrigerator is running, it’s well worth keeping in mind as a principle.