Earlier this week, I spent about an hour preparing four pans of lasagna at the same time, with the intent of eating one pan as a family dinner and freezing the other three for future use.

I’ve often talked about making meals in advance and how it saves both time and money, so I thought it was time to show you a real-world example of how I did this. The images in this article aren’t perfect food photography; rather, they’re real images from my kitchen of how a real person can easily do things like this.

So, let’s get started.

Why Make Meals in Advance?

For some, spending time on a project like this seems like a waste of time. Why would you spend a ton of time making batch meals like this? Why not just buy frozen meals or go out for supper if you wanted convenience?

There are a bunch of reasons for this.

Second, it also shifts your time from less intense moments where you have some free time to more intense moments when you can really use some extra time. I don’t know what your life is like, but my evenings are often really busy. It can be pretty tricky to get a meal on the table while balancing things like community volunteering, Sarah’s work schedule, taekwondo practice, soccer practice, music lessons, social events, and other things.

By preparing meals in advance during a time where there isn’t a demand on your time – like a lazy weekend afternoon – you save greatly on meal prep time on a busier weeknight. Now that I have these pans of lasagna in the freezer, all I have to do is pull one out the night before I want to cook it, then pop it in the oven about 45 minutes before we need to eat. There’s no mess, no prep – it’s easy. That makes hectic evenings a lot more tolerable.

Third, it saves money by allowing you to take advantage of bulk purchases and sale prices. As I’ll show below, cooking four pans of lasagna at once enabled me to take advantage of some bulk prices, which dropped the cost of ingredients per pan of lasagna. I was also able to really take advantage of specific sale prices at the grocery store, as I had a good reason for buying things like several jars of pasta sauce at once. Not only that, if I plan in advance, I can buy these bulk things whenever they go on sale, not just when I’m about to make the meals.

Here’s how it all came together.

The basic recipe I used was a simple vegetarian spinach lasagna that my family absolutely loves. It’s really, really simple in its basic form.

That’s it. I just make 12 layers in the pan by alternating these ingredients. I start with 1/2 cup of the sauce, put in a layer of noodles (three of them), top that with a cup or so of the chopped spinach, and put a cup of mozzarella cheese spread on top of that. I then just repeat those same layers twice.

I do this all in a 9″ by 13″ baking pan that I’ve pre-coated with a bit of olive oil. If the noodles are warm, then I just bake it in the oven at 400 F for 30 minutes, covered for the first 10 minutes. If the noodles are cold – meaning if I stored it in the refrigerator for a while after making it or I thawed it in the refrigerator – I bake it at 400 F for 45 minutes or until it’s plenty warm in the middle.

The time investment comes from things like chopping the spinach if you’re using fresh spinach (you can use a similar quantity of frozen spinach instead if you squeeze out the liquid), cooking extra vegetables for the sauce, cooking the noodles, and actually making the layers in the pan.

If you’d prefer a non-vegetarian lasagna, you can simply cook half a pound of ground beef and add it to the sauce.

It’s simple – just quadruple all of it. 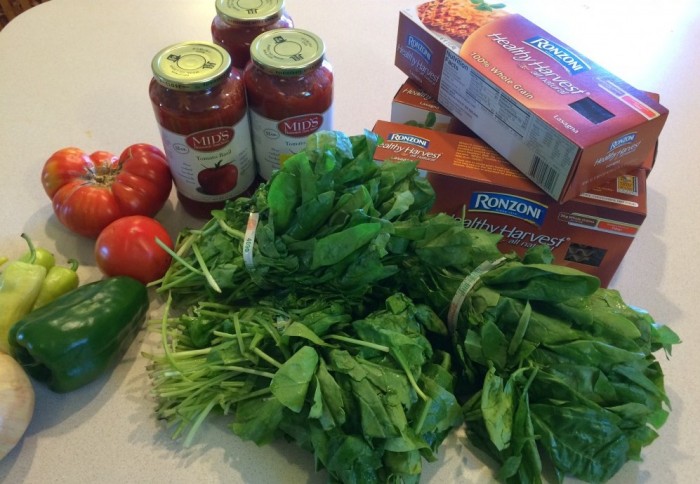 That’s right – part of this plan involves using four 9″ by 13″ pans. Most people don’t have that many 9″ by 13″ pans lying around and it’s an expense to go out there and buy such pans. So, what’s the solution?

For us, we tried – and quite liked – Glad OvenWare pans. These come in a 9″ by 12″ size, which works just fine for this purpose. They come with a cover to keep them sealed in the freezer. They easily go from the freezer to the refrigerator to the oven with no problems whatsoever. They stack really well, meaning you can have several in your cupboard and they won’t take up much room. They’re reusable – we’ve used them multiple times without any wear or problems yet – and, best of all, they’re really inexpensive. 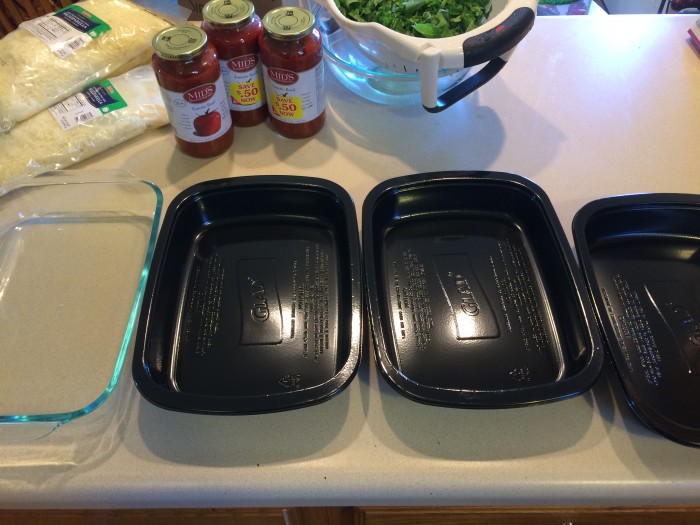 I was able to buy several of these on sale and also used a coupon, so I paid a little under $2 per pan. You can get them at any time on Amazon for $3.25 per pan.

Given that they can be reused many times, they definitely trump using temporary aluminum pans. Given their low cost and the fact that they come with a cover, they might arguably trump better pans, too, as those cost several times more than these Glad OvenWare pans.

I simply put four pans out on the table – one of our Pyrex 9″ by 13″ baking pans from the cupboard along with three of the Glad OvenWare pans described above. I sat all of the ingredients around the pans – the chopped spinach, the sauce with the roasted vegetables added, the cheese, and the noodles – and just began to layer each pan, starting with a coating of olive oil on each.

I put a few teaspoons of sauce into the bottom of each pan (adding up to roughly half a cup) and spread it around. I followed that with a layer of noodles in each (three are enough to make a layer), then a layer of spinach in each (about a cup), then a layer of cheese in each (about a cup). This is the most efficient way of making multiple pans, as you only worry about one ingredient at a time. You’re just putting that ingredient in four pans at once.

After that, I just repeated the whole layering process twice. Half a cup of sauce, spread around, three noodles, a cup of chopped spinach, and a cup of shredded cheese. 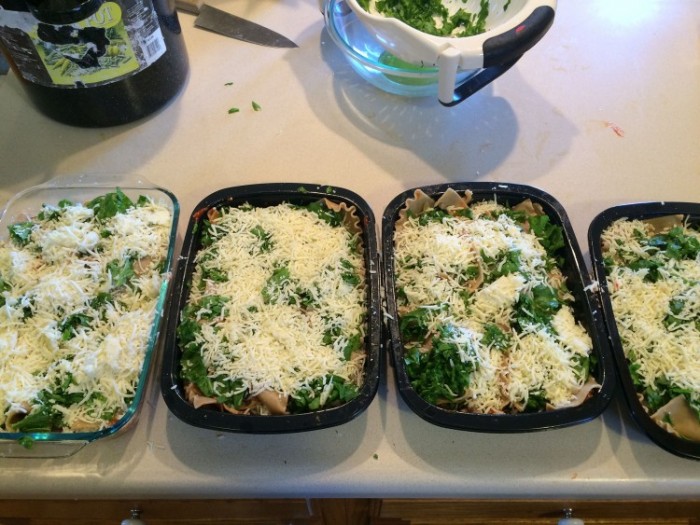 I then covered the Pyrex pan and put it in the refrigerator until dinner, then put the covers on the Glad OvenWare pans and put them in the freezer, each with a small masking tape label that indicated what it was (vegetarian lasagna) and the date I made it.

In the evening, I cooked the Pyrex pan of lasagna at 350 F for 40 minutes. I uncovered it at the 20-minute mark.

For the frozen pans, when I decide to use them, I’ll pull a pan out of the freezer the day before and put it in the refrigerator. It’ll stay in there overnight and through the next day, slowly thawing. The next evening, I’ll put it in the oven at 350 F for 45 minutes, removing the cover at the 25-minute mark.

I’ll check the middle when it is “finished” to make sure it is hot all the way through and, if not, I’ll cook it a while longer (this depends more on the temperature of your refrigerator than anything else).

This is so easy. The only thing you have to do in the evening is preheat the oven and toss the lasagna in there and you have a great home-cooked meal – not a prepackaged meal, but one you prepared yourself.

Cooking meals in batches like this takes a lot of extra work, don’t get me wrong. You’re going to spend longer cooking four pans of lasagna than you would cooking just one pan. However, you won’t spend four times as long. According to my experience, it’ll take roughly twice as long as it does to make a single pan.

That means that you’re literally eliminating the prep time for two pans of lasagna by doing it this way. Believe it or not, this method is an extensive time saver.

It also saves quite a bit of money because of the bulk buys – my back-of-the-envelope math says that bulk buying saved us about $3 per pan using this method.

All in all, if you happen to have a free weekend afternoon, making meals in advance like this one is a great way to use that afternoon to save yourself some money and also save yourself time in the long run. Yes, it takes planning, and it can mean that you’re investing two or three hours that afternoon on bulk meals, but when it’s done, you’re going to have a number of very quick weeknight meals, saving you time when you need it most.