How Purging Your Stuff Saves Money 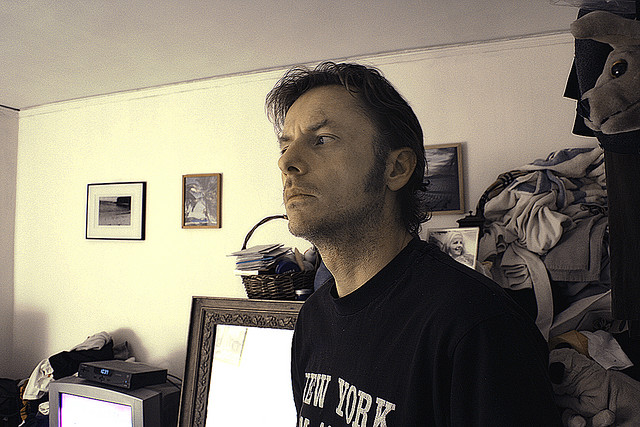 Looking for something? With all that clutter, it’s no surprise you’re having trouble. Photo: Dickuhne

Cleaning a little a day will keep the large messes away. Sounds pleasant and doable, until the little messes become massive catastrophes and your home transforms into a war zone.

Maybe your messes aren’t this extreme, but even the smallest amount of clutter is enough to drive a fairly neat person insane. But what do you do when you or your partner find it hard to part with many of the items in your home? It depends on your situation, but here are some reasons to justify purging in the near future:

1. More Efficient Use of Time

If you’re anything like me, you don’t mind spending hours on end looking for a particular item to save money. But are you really doing yourself justice?

Probably not, since the cost of spending hours on a manhunt could outweigh the benefits of purchasing a replacement and moving on to more important tasks. And if you’re an entrepreneur, time is definitely money.

This was enough motivation for my latest purging session. I was tired of spending hours trying to locate a particular document, sock, shirt, or any other item that had made its way into a black hole. And each moment spent doing so was taking time away from income-generating projects.

There’s no more sorting through a cluttered closet, garage, bedroom, or any other part of the house for an item I desperately need. We’ve managed to toss or sell all the extras and neatly organize what remains. Less money spent on replacements and more time available for core business activities. Problem solved.

2. Knowledge of Inventory on Hand

I’m almost embarrassed to reveal how many times I’ve purchased groceries only to return home and discover duplicates in the pantry or refrigerator.

I used to wonder how this kept happening, since I always made a list before heading out, when it dawned on me: There was so much crap in the kitchen that several items were pushed into discrete places.

And the kitchen wasn’t the only problem area. Toiletries always seemed to disappear under the bathroom cabinet.

There’s nothing more annoying than attempting to tackle a mess and realizing you have way too much stuff, most of which you have no desire to part with.

Whether you like it or not, the latter is a sign of hoarding, which can cause a host of long-term health issues, both physical and mental. In fact, the International OCD Foundation touched on a few detrimental effects of hoarding that I could relate to, as I once resided with what I like to call a Stage 1 hoarder.

For starters, hoarding leads to loss of usable living space, which can result in the need for storage outside the home. We’ll touch on storage costs later, but if the kitchen is one of the areas stricken by the clutter bug, obesity and other medical issues could arise if you’re forced to rely on takeout to meet your sustenance needs because the kitchen is too messy or inaccessible to use.

Another key point is the mental health implications, including depression, which result from isolation. I witnessed this firsthand; the individual I was living with always feared friends or relatives would eventually want to come over. Too fearful to say no and embarrassed by the living conditions, she went into a bubble and remained distant. Eventually, she decided to get help from a professional organizer and start seeing a therapist, which was rather costly. And if you have children, they could develop the same level of social awkwardness and even begin to resent you.

When you do face the moment of truth and decide to part ways with idle belongings, you’ll be purging for days on end and extremely angry with yourself for being a glutton. But one good thing should come out of it: The desire to pick up any item that tickles your fancy as you stroll up and down the aisles will fade away as you’re reminded of your past guilt.

Western culture teaches us to do whatever it takes to live the lifestyle we want. And if you succumb to the trap, you’ll probably end up with much more than you need, which creates a greed complex and makes it difficult to appreciate what you actually have. (A quick fix to this problem is visiting or volunteering at a homeless shelter; a bit extreme, but humbling.)

As you sort through the clutter, it becomes obvious how much you have to be thankful for, and something else happens: You develop ideas for new projects so you don’t have to set foot outside your home. And in those moments where you feel what you have isn’t enough, remember there’s someone out there who’d love to be in your shoes.

What’s the point of keeping items you rarely use?

My rule of thumb: If it hasn’t been used in six months, with the exception of confidential documents and sentimental valuables, it must go.

Easier said than done. If you’ve ever watched “Hoarders” or lived with a pack rat, it’s obvious the possessions in their home have taken ownership of their lives. And sometimes for valid reasons; maybe they’ve lost a loved one and want to hold on to their belongings, or have experienced homelessness and refuse to throw out hardly anything in case a need arises.

However, you must learn to let go and get to the root of the problem, because there’s obviously some void you’re trying to fill. And once you’ve figured it out, you can start purging and save some cash by eliminating the need for storage space.

Out of curiosity, I ran the numbers on three storage units to gauge just how pricey they can be. Based on quotes received from Public Storage, the costs are as follows for a climate-controlled unit:

Dust, grime, and unnecessary stress ultimately equal more money spent and unpleasant health effects. The more clutter in your home, the harder it is to properly clean areas and cut the dust and moisture.

According to the CDC, your health could suffer. Excessive dust mites, which accumulate easily in cluttered areas, have major health implications for those with asthma, and allergies or sensitivity to dust mites.

Spilled liquids and other excessive moisture cause mold and can lead to nasal stuffiness, throat irritation, coughing or wheezing, and eye and skin irritation, notes the American Lung Association.

Purging to avoid this extensive list of potential complications from poor air quality should help eliminate frequent and expensive trips to the doctor, emergency room, or pharmacy.

The less you have, the more comfortably you can live in a smaller space. And if you rent, your bottom line should be much cheaper in a smaller apartment, in addition to having less space to heat and cool.

Let’s say you live in an 800-square-foot apartment with monthly rent and utilities of $1,100 and $160, respectively. Based on these figures, you’re paying $1.38 for rent and 20 cents for utilities each month per square foot.

If you’re able to purge enough of your belongings to move into a 600-square-foot unit, you could save $275 a month on rent and $40 on utilities, assuming the price per square footage and consumption rates are comparable.

Not sure how to downsize?

For starters, venture from room to room collecting items that must go. This is by far the most difficult part of the process. Parting ways with your great-grandmother’s quilt, your first musical instrument, or any other item that holds sentimental value may trigger separation anxiety. And then there’s the care package from your last employer and all the other meaningless crap that’s been collecting dust for several years.

We all have items lying around we intend to use someday. If you haven’t used them in months or years, it’s probably time to cut the cord.

But if they’re in decent shape, the trash bin isn’t the only option. You can donate items to a charitable organization, sell them at a garage sale, or online via Craigslist, eBay, or Amazon, just to name a few.

Most important: Once you’ve decided what will go, collect the goods in labeled boxes or trash bags and remove them promptly to avoid reconsidering your decisions.

Next, examine what’s left and determine the most efficient way, whether it be storage bins or existing shelving, to stow the items without cluttering up the room. This may be a bit overwhelming if items are scattered all over the floor, so try grouping similar items into piles.

Regardless of which method you select, it should make packing your belongings much easier and minimize the space occupied in your future residence. A few ideas:

If you find there’s still more stuff than available space in your new place, return to step one.

Otherwise, you should be all set.

You engage in a session of retail therapy, and then you look at the tags months later and realize you blew hundreds of dollars on clothes you haven’t even worn. Even if the items were on sale, money was flushed down the drain.

While purging can’t undo that financial damage, it can hedge against the risk of having buyer’s remorse later. Each time you’re tempted to buy a new item you want, you’ll be reminded of how you felt the last time you were forced to part with all the things you accumulated, but never used.

On the other hand, if your case of buyer’s remorse becomes too severe, this may trigger more retail therapy to justify your poor spending habits and decision-making. This can create major strains on your finances and saddle you with a mountain of debt.

If your home is cluttered to the point where your kitchen appliances are overburdened or difficult to access, small issues can end up causing major damage.

For example, the condenser coils at the bottom rear of your refrigerator must be dusted regularly to keep the compressor fully functional. Otherwise, too much buildup will cause it to work much harder than it should, drawing more electricity, and possibly overheat, prompting a pricey repair or complete replacement.

If your air conditioning units are difficult to access because of all the clutter in the way, you may not change the air filters as regularly, which can have serious implications for the units.

We touched on this in “18 Ways to Slash Your Utility Consumption in Half.” Not only do clean filters save you money by reducing energy consumption, but they prevent the buildup of excessive filth and dirt in the condenser and evaporator coils, which are the mechanisms that enable adequate circulation of air flow.

During the process, purging may seem like the most massive endeavor you’ve ever undertaken, but your wallet and health will thank you. However, maintaining the area after a purge can present its own challenges and force you to start from scratch in no time; it’s draining, to say the least.

The rooms won’t clean themselves. Allocate a small portion of your time each day to keep the messes to a minimum. For problematic areas, such as children’s play areas, you may have to revisit them more than once daily.

Cheers to a de-cluttered home and more money in your pocket.

Allison Martin is a writer, financial mentor, and business consultant to mommy-preneurs. Her work has been featured on ABC News, MSN Money, Yahoo Finance, Fox Business, Credit.com, and Money Talks News. When she’s not writing, Allison enjoys spending time with her family and traveling.