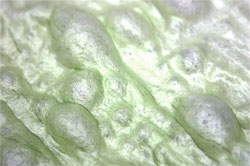 I’ve been experimenting with making lots of cleaning supplies at home, but this one is by far the craziest – and the most successful. Basically, I made a giant bucket of slime that works incredibly well as laundry detergent at a cost of about three cents a load. For comparison’s sake, a jumbo container of Tide at Amazon.com costs $28.99 for 96 loads, or a cost of $0.30 a load. Thus, with each load of this stuff, I’m saving more than a quarter. Even better – I got to make a giant bucket of slime in the kitchen and my wife approved of it.

Here’s what you need:
– 1 bar of soap (whatever kind you like; I used Lever 2000 because we have tons of bars of it from a case we bought a while back)
– 1 box of washing soda (look for it in the laundry detergent aisle at your local department store – it comes in an Arm & Hammer box and will contain enough for six batches of this stuff)
– 1 box of borax (this is not necessary, but I’ve found it really kicks the cleaning up a notch – one box of borax will contain more than enough for tons of batches of this homemade detergent – if you decide to use this, be careful)
– A five gallon bucket with a lid (or a bucket that will hold more than 15 liters – ask around – these aren’t too tough to acquire)
– Three gallons of tap water
– A big spoon to stir the mixture with
– A measuring cup
– A knife

A lot of these items are household staples and you can find pretty good deals using coupons and coupon codes. Check out the Simple Dollar Coupon Finder for hundreds of daily deals on grocery and pharmacy items. If you find one or a couple of these items on sale or discounted in bulk, take advantage of the savings!

Make Your Own Laundry Detergent – Step by Step

Step One: Put about four cups of water into a pan on your stove and turn the heat up on high until it’s almost boiling. While you’re waiting, whip out a knife and start shaving strips off of the bar of soap into the water, whittling it down. Keep the heat below a boil and keep shaving the soap. Eventually, you’ll shave up the whole bar, then stir the hot water until the soap is dissolved and you have some highly soapy water.

Step Two: Put three gallons of hot water (11 liters or so) into the five gallon bucket – the easiest way is to fill up three gallon milk jugs worth of it. Then mix in the hot soapy water from step one, stir it for a while, then add a cup of the washing soda. Keep stirring it for another minute or two, then add a half cup of borax if you are using borax. Stir for another couple of minutes, then let the stuff sit overnight to cool, and you’re done.

How Much Will You Save?

When you wake up in the morning, you’ll have a bucket of gelatinous slime that’s a paler shade of the soap that you used (in our case, it’s a very pale greenish blue). One measuring cup full of this slime will be roughly what you need to do a load of laundry – and the ingredients are basically the same as laundry detergent. Thus, out of three gallons, you’ll get about 48 loads of laundry. If you do this six times, you’ll have used six bars of soap ($0.99 each), one box of washing soda ($2.49 at our store), and about half a box of borax ($2.49 at our store, so $1.25) and make 288 loads of laundry. This comes up to a cost of right around three cents a gallon, or a savings of $70.

Plus, you can make slime in the kitchen – and have a legitimate reason for doing so!