Few things feel better than a sudden breeze on a hot summer day when you’ve been outside working on something. The sudden movement of the air feels incredibly good on your skin.

This works because of a few basic properties of your skin. Whenever air moves over your skin, it feels a bit cooler because moving air is more efficient at removing heat from your body than still air is. (This is even more true when you’re sweating, because the moisture on your skin makes the removal of heat even more efficient.)

This is the reason why it makes sense to have a ceiling fan running in any room you happen to be in during the hot summer months. 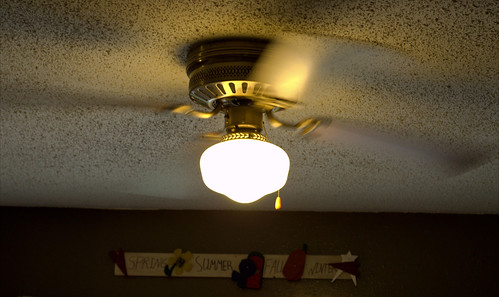 Because of the effect of air moving across your skin causing you to feel cooler, when you have ceiling fans running in your home, you can get away with running the air conditioner at a higher temperature than if you did not have a ceiling fan in the room.

Think about it. If moving air makes you feel cooler, then 78 degrees with air moving around will feel roughly the same as, say, 74 degrees without any significant air circulation. (Note that these are approximate numbers – humidity, personal sensitivity, and other factors play a role, too.) A ceiling fan can easily provide the necessary air circulation.

According to this calculator, dropping the running time of a central air conditioning unit from 9 hours a day down to 7 hours a day will save you $34 in a single month (using default electricity rates). If you assume that you’ll save that much in the three peak months of summer and perhaps half that much in the two adjoining months, you’re saving about $130 per year.

Compare that to the cost of running a 48″ ceiling fan on high 18 hours a day, which will cost you $5.92 at the same rate. Even over five months of use, you’re still looking at $30.

Ceiling fans can be a tremendous savings tool. If you use air conditioning with any regularity in the summer, consider installing one in each room that you spend significant time in.