An International Adventure Is Closer – and Cheaper – Than You Think

Whether it’s the exotic thrill of hearing or speaking another language, eating unusual dishes, or just experiencing another culture, the allure of wandering foreign lands calls to you. But when you add in the amount of time you’d need to take off work to fly across the ocean, along with the expense of said flight and potentially unfavorable exchange rates, your enthusiasm might drop a bit.

Consider flights. Los Angeles to Tokyo? Starts at $650 for a nonstop 12 hours. New York to Paris? A 10-and-half-hour nonstop will set you back $2,000 right now. One layover will get you closer to $650, but adds precious time.

A quick search on Hopper, meanwhile, shows any mix of midsummer and fall flights from New York City, Los Angeles, or Denver to Vancouver, Montreal, or Calgary ranging from $250 to $500 — almost all of them nonstop and getting you from place to place in no more than six hours. (And a lot less jet lag on either end.)

Add to those benefits the current state of the American dollar in Canada. As of early June, you could buy one Canadian dollar for 76 cents in U.S. currency. That means that $10 cheeseburger and IPA just cost you $7.64; the $150 Book of Mormon ticket, $115; and the $250 hotel room, $191. You’ll get a 24-cent discount on every dollar north of the border, so it’s up to whether you want to go budget on a super-budget, or splurge and add a little luxury. (Balcony to mezzanine, perhaps?)

Canada makes good financial sense. And with almost 4 million square miles from Pacific to Atlantic open for exploring, most any international travel fancy can be passport-stamp-certified amid the country’s 10 provinces and three territories.

Let’s start with the most obvious international yearning: a trip to France. Canada implemented official French-English bilingualism in 1969, so you’ll have opportunities to test out your “Bonjour, mademoiselle” across the country.

If you’re beyond basic pleasantries, head to Québec, where French is the sole official language. Walk the walled city of Old Québec, whose cobblestone streets and stone churches manage to look more European than even some actual cities in Europe. Opt for a stay at Le Monastère des Augustines. The holistic health-focused boutique hotel, a heritage site set within the walls of North America’s first hospital north of Mexico, features an ancient cloister that dates back to the 17th century. 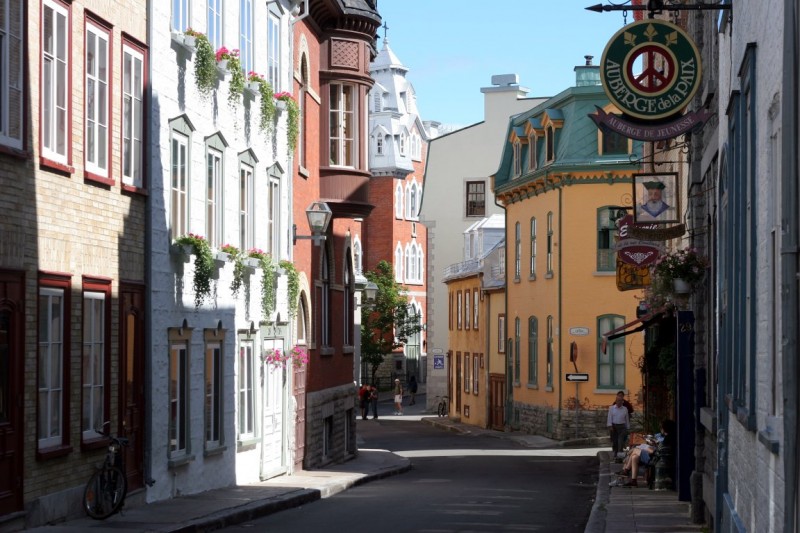 More European feels can be found all over Canada. Dreaming of countryside vineyard-to-vineyard tasting tours like you might in Italy, Spain, or France? British Columbia’s wine country — a four-hour drive east from Vancouver — is diverse and growing fast. In 25 years, the industry has expanded from 17 grape wineries to 255. And it’s a good thing. British wine critic Steven Spurrier of Decanter magazine says, “For me, wine is the three ‘Ps’: the place, the people, and the product. British Columbia ticks all three boxes with exuberance, elegance, and conviction.”

For a Celtic cultural infusion, head east to Newfoundland, home of popular bands such as Great Big Sea, Connemara, and Irish Descendants. The trad music and festivals found in abundance around Nova Scotia (particularly Cape Breton) and Prince Edward Island will also speak to your Gaelic heart.

Seeking an Asian culinary expedition without the 24-hour trans-Pacific flight? Foodies, you’ve found your spot. Richmond, B.C., just south of Vancouver, has been coined the Asian food capital of North America. Trade in your Friday night sweet and sour Chinese delivery for a weekend on “Food Street,” which features three blocks with about half of the 400-plus Japanese, Malaysian, Vietnamese, Thai, and Korean restaurants in the city. From morning to night, you can taste dishes like miso black cod or bibimbap with banchan, hitting a different country at every meal.

If Greenland or Norway have made your bucket list because you want to see polar bears and the Northern Lights, you can find tours geared toward both in Northern Canada’s backcountry. This part of the world is home to approximately 60% of the world’s polar bears, according to Polar Bears International, and the Yukon, in particular, consistently lands on top-10 lists for the best places to see the ethereal aurora borealis.

Even beachgoers can be satisfied in Vancouver, just over an hour north of Seattle. Relax below Carribbean-esque palm trees at English Bay Beach, spike a volleyball to the sand like you might in Rio de Janeiro at Kitsilano Beach, and bare all your skin French Riviera-style along the 4.8 mile-long public and legal “naturalist” Wreck Beach.

Kirsten Akens is an award-winning journalist and editor based in Colorado Springs, Colo. In addition to her work for the The Simple Dollar, her bylines can be found in a variety of online and print publications, including O - the Oprah Magazine, People, and Lifehacker.