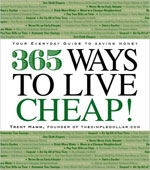 In 2008, I published a book entitled 365 Ways to Live Cheap. The book itself is pretty straightforward. It’s a collection of 365 specific tactics for saving money. The experience writing the book was an interesting process, however.

I had the genesis of the idea not too long after I started The Simple Dollar. I had originally been thinking of using the “365 Ways to Live Cheap” idea as a yearlong series of posts in 2008 and so I started on the project in early 2007, compiling a list of tactics and researching each one a little.

I kept this as a folder on my computer desktop for two years, as the project moved from a post series to a long book to a much shorter book. I tossed in little facts, some anecdotes, and other materials for each entry.

Flash forward to late 2010. I started looking through those folders of material and began to realize that there was a lot of good stuff there. I considered making an “expanded” version of the original book, but eventually I decided that it might be more fun if I just revisited each entry in a new series of posts on The Simple Dollar made up of all of this unused material.

I won’t be reprinting the material in 365 Ways to Live Cheap as I view that as a wonderful concise handbook on frugality tactics. Instead, I’m just going to use each of those entries as a starting point and riff on each topic, using the material I had saved for the book and my own thoughts over the years since writing the original book.

Each remaining day in 2012, there will be a new post discussing one of the entries from 365 Ways to Live Cheap. I’ll label them with an “(X/365)” after the post title. Consider it a year of frugality basics.

Oh, and there’s one more thing…

Mentorship and Photography
Several years ago, I started to mentor a young woman named Brittany who’s passionate about photography. She grew up in a rural background much like my own. Like me, she’s the first in her family to go to college. I’ve known her and her family for a very long time.

All along, she’s harbored a real dream of having her own photography business, and she’s been taking active steps to make it happen. She’s taken some significant training in photography while majoring in business in college.

Time and time again over the last several years, she’s come to me for advice on what the next step should be, and she’s constantly impressed me with her diligence and work ethic toward her goals. Right now, for instance, she’s knocking down good grades in college while keeping a part-time job and spending time establishing her photography business and growing her skills. She’s building a foundation for the rest of her life in a very smart way.

I have consistently been impressed with the life choices and the professional choices she has made. She’s far more entrepreneurial and has a harder work ethic than I ever had at her age.

I’m also a big believer in doing everything I can to give opportunities to people who are working to create a better future for themselves, which is exactly what she’s doing.

So, this past fall, I made Brittany an offer. She became an intern for The Simple Dollar with a very specific mission. I wanted her to take a single photograph for each of the entries in 365 Ways to Live Cheap and allow me to use them on The Simple Dollar.

Each entry in the post series this year will feature an image from Brittany Lynne Photography (her budding business) that matches the content of that particular “way to live cheap.” Hopefully, these images will visually illustrate the beauty of frugality in everyday life.

Naturally, she’s still at a point where she’s learning about photography and production techniques and growing in her skill set with every image. I don’t expect the images in this project to look like the finished product of a truly great professional photographer with years of experience.

Instead, what I see in these images (of what I’ve seen so far) is a young woman with a bright future taking advantage of an opportunity. I see her learning and growing with every click. I see someone who’s hungry for a chance.

That, to me, is beautiful in and of itself, and I think it perfectly complements the “do it yourself and improve yourself” nature of 365 Ways to Live Cheap.