Make Your Own Powdered Laundry Detergent (18/365)

I’m often stunned at the high price of laundry detergent. If you’re buying Tide, for example, even if you buy the jumbo pack in multiples, you’re still paying over $0.30 per load. Even generic detergents rarely cost much below $0.15 per load.

That’s why I prefer to make my own detergent. I can easily get the cost down to $0.05 per load, meaning I’m saving at least a dime with every load of laundry I make. 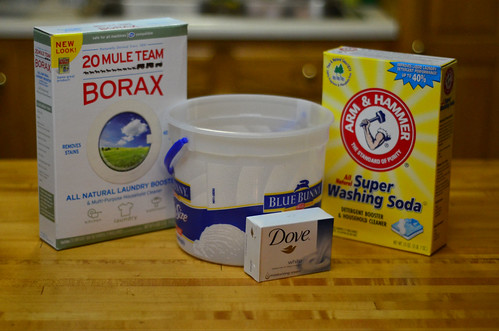 All I do is take a bar of ordinary soap and a box grater, then grate that bar of soap down into a fine powder, about a cup of it. To that, I add one cup of washing soda, half a cup of borax, and half a cup of an oxygen cleaner, such as OxiClean, which serves as the surfactant in the detergent. I mix this thoroughly in a Ziploc container, then toss in a tablespoon for measuring. Some people like to also add half a cup of baking soda, but I’ve never felt it necessary to get my clothes clean.

When I do a load of laundry, I just scoop two tablespoons of my mix into the washing machine and I’m good to go. This stuff works great – it gets my clothes clean and fresh every time.

I’ve been extremely happy with this detergent. I’ve used it on all types of clothes – whites, reds, coloreds – and all levels of dirtiness without any problems. I haven’t noticed any significant dinginess over a large number of loads, either.

Making a batch of this powdered detergent doesn’t take a whole lot of time, either. Most of the time is spent grating the soap, which is something you can easily do while watching a television program or something like that. After that, you just put the ingredients in a container, shake it thoroughly, and you’re ready to go.

We’ll often make this in quadruple batches. We’ll just grate four bars of soap at once, add four cups of washing soda, two cups of borax, and two cups of OxiClean to the container, and shake it thoroughly. I’ll usually just add a little bit of each ingredient, shake it, and then add a little bit more of each ingredient, repeating the cycle, in order to make sure it’s well-mixed.

How much does this really save? In our house, we do an average of a load of laundry a day – that’s the end result of having two adults and three messy young children at home. If we’re comparing to generics, then I’m saving approximately $0.10 per load. Over the course of a year, that’s $36.50.

Simply put, we’re saving a hundred dollar bill a year by doing this. To me, that’s well worth the effort of mixing up some powder for about five minutes once every three months or so.

Give it a shot. Make yourself a batch of this at home using the ingredients described above and see if it works for you. If you like it, you’re going to save some significant money over time. Even if you don’t, the ingredients (borax, washing soda, OxiClean) can easily be used for other cleaning projects around your home.