I often talk about how I enjoy preparing meals in advance by making a bunch of duplicate meals at once, popping them in the freezer in a state that’s almost ready to eat, and then pulling them out when needed, merely reheating and then eating them.

For many people, the idea of preparing a bunch of meals at once sounds really challenging, so I thought I’d use the absolute simplest “meal prep” that I do in order to show you how easy it really is.

I actually don’t like to excessively flavor my rice and beans, but some of the things you might want to add would include spices such as cumin, cayenne pepper, chili powder, or red pepper flakes; cooked onions and peppers; cheese; or salsa.

We’ll talk about some specifics later, but that’s really all you need. Here’s your shopping list:

You’ll also need sixteen individual containers for these lunches. I always use reusable containers for this purpose. I recommend these LIFT microwaveable and freezable meal prep containers, which cost about $1.50 a pop but can be reused a lot of times. They’re the ones I show in this video. For this specific recipe, two sets of them would be needed, along with two more bowls to put two of the meals in the fridge for eating in the next day or two.

What Do You Do?

The procedure is pretty simple. First, just dump the beans in a large pot and cover them with several inches of water, then let the beans soak overnight. If you’re doing this on a Saturday morning, for example, you could just put the beans to soak the night before, just before bed.

The next morning, the first thing you’ll need to do is cook the rice. I’m using our Instant Pot to pressure cook the rice, meaning that we can get all of the rice cooked in about 30 minutes. I used this exact method for cooking the rice; I did it in two equal batches because I didn’t want to overfill the Instant Pot and I also had other things to do while the rice is cooking. 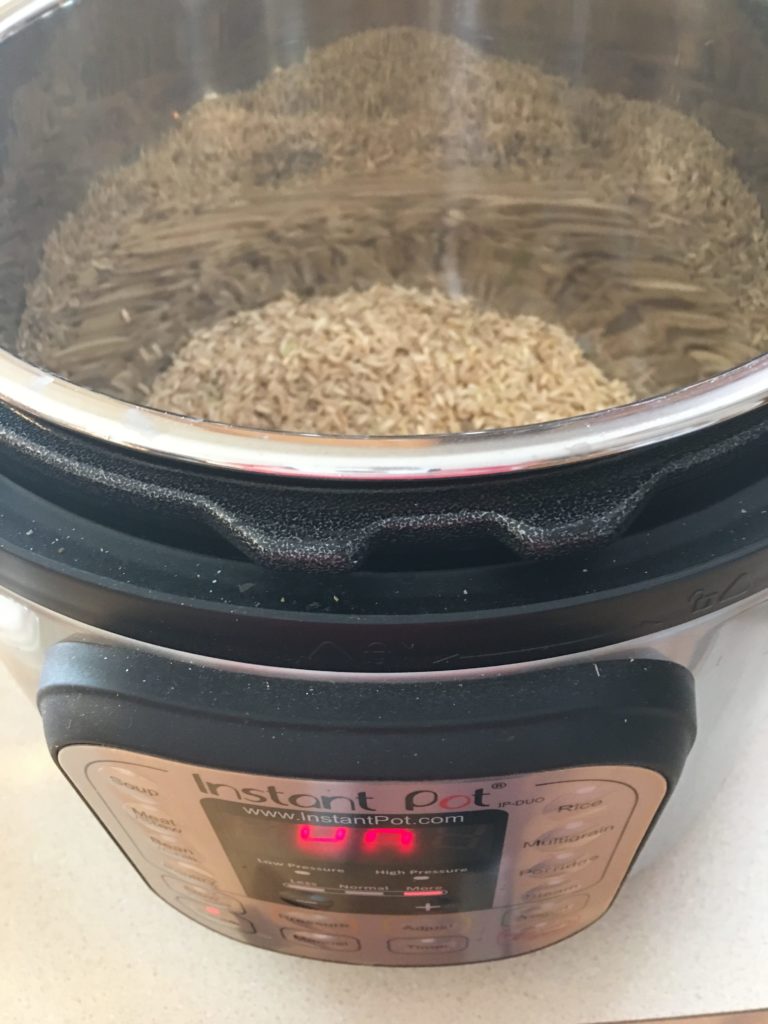 Pardon my photography skills; this is my real kitchen and not a picture studio.

Obviously, you can use whatever method you prefer to cook up the rice. You can do it in advance if you prefer and store the rice in the fridge, too.

While the rice is cooking, you’ll want to strain the water off of the beans, then add water to the beans and boil them for a while. The beans won’t be cooked yet after soaking, but they’ll cook fairly quickly, in about 45 minutes or so. I suggest adding some salt while you cook them – for the amount here (two pounds dry), you can add several tablespoons. 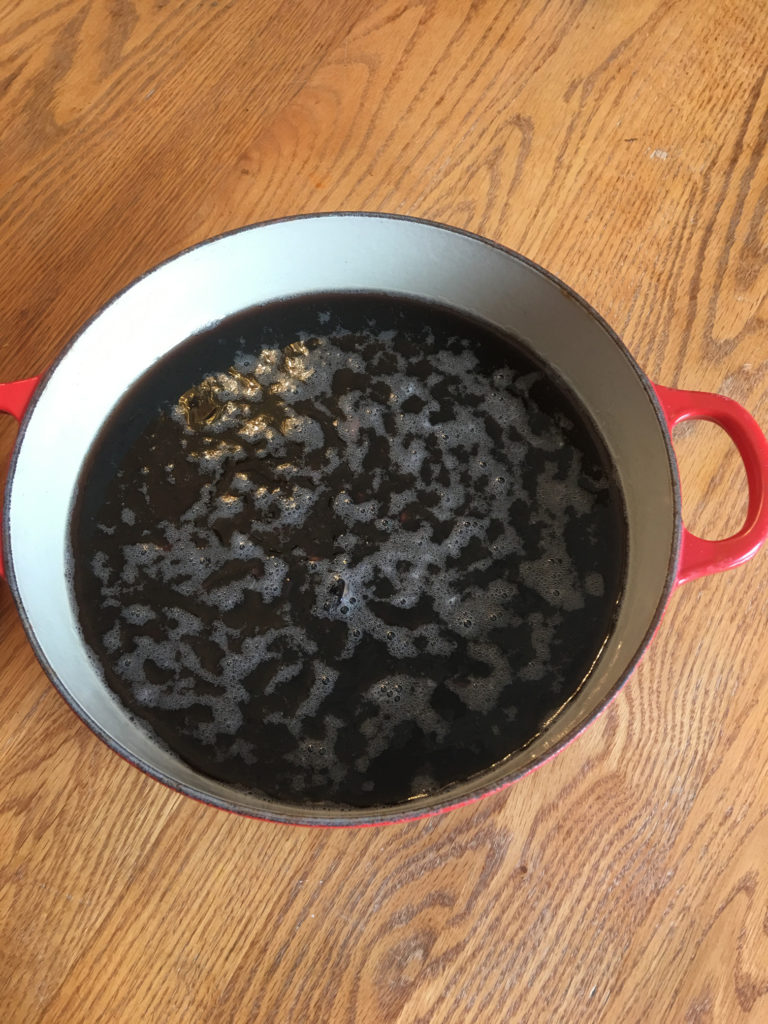 Just put the soaked beans in a pot, add water until the beans are covered, bring it to a boil, and make sure it doesn’t boil over. Taste the beans every ten minutes or so until the beans are at the texture you prefer. For me, that was around the 45 minute mark. When they’re done, reserve about a cup of the liquid that the beans were boiling in and strain away the rest.

While the beans are boiling and the rice is cooking, you can also saute the seasoning mix in a skillet if you’d like. Just put a little bit of oil in a skillet, turn it on medium high, and add the seasoning mix (remember, it’s just chopped onions and peppers). While it’s cooking, you can add other seasonings if you’d like – pepper, cumin, and so on. Cook these until the onions are starting to turn a caramel color, stirring frequently. Remove it from the heat, then add the reserved bean liquid straight to the skillet! It’ll sizzle and smell wonderful.

Then, lay out all of your containers and get to work. 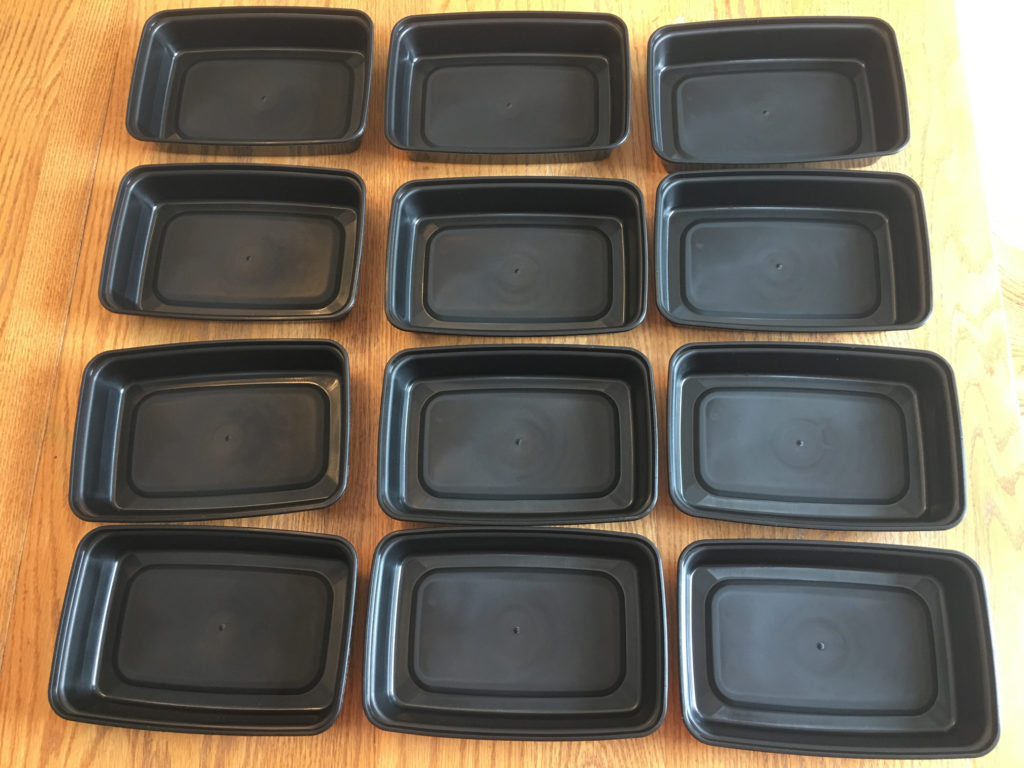 Just add 3/4 cup of beans and 3/4 cup of rice to each bowl. It’s easy if you have a measuring cup. What you’ll find is that it comes out pretty close to perfect if you have sixteen containers to put it in. I used 14 resealable ones for the freezer and two ordinary bowls for meals heading to the fridge.

At this point, you can add other ingredients to the bowls. Add 1/4 cup of cheese to each, or 1/8 cup salsa. If you really want some meat in there, add a bit of chopped up cooked chicken breast or some chopped-up sausage. (I find that rice and beans alone is absurdly filling, but that’s me.)

Very important: add about two tablespoons of water to each of the bowls at this point. If you don’t, it’ll be quite dry when you’re done. 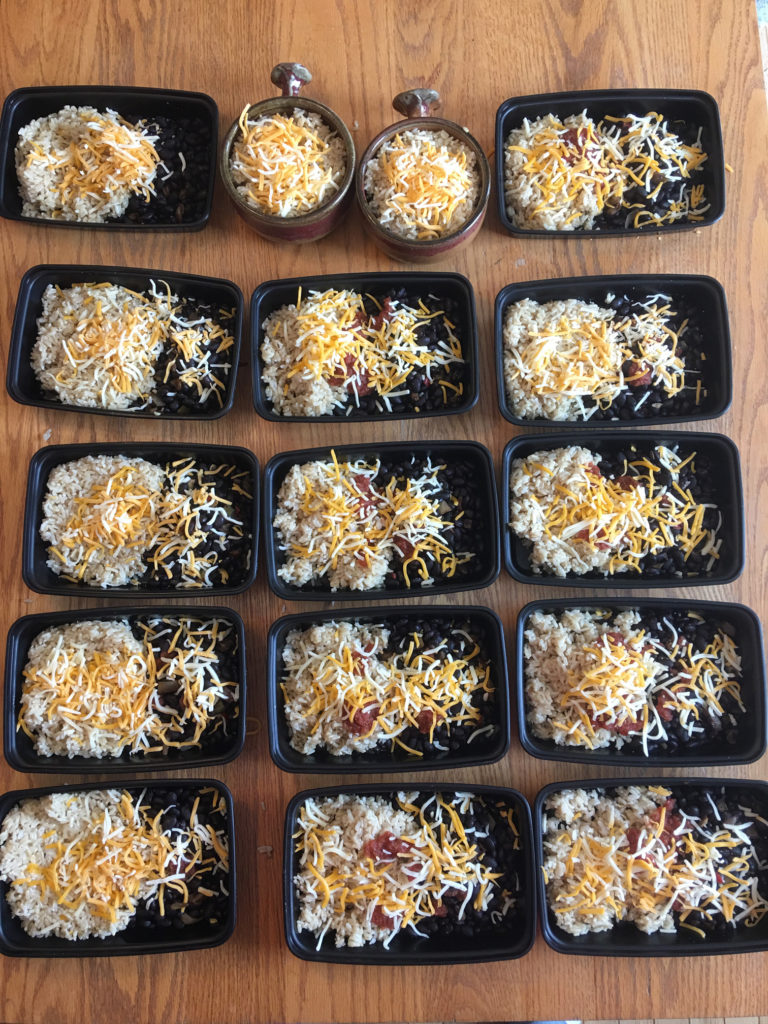 Now, pull out some masking tape and make a label for each dish. Write what it is, any nutritional info you want to add (I calculated my lunches to be about 430 calories each), and the date you packed them. Put a lid on each one and they’re ready for the freezer! 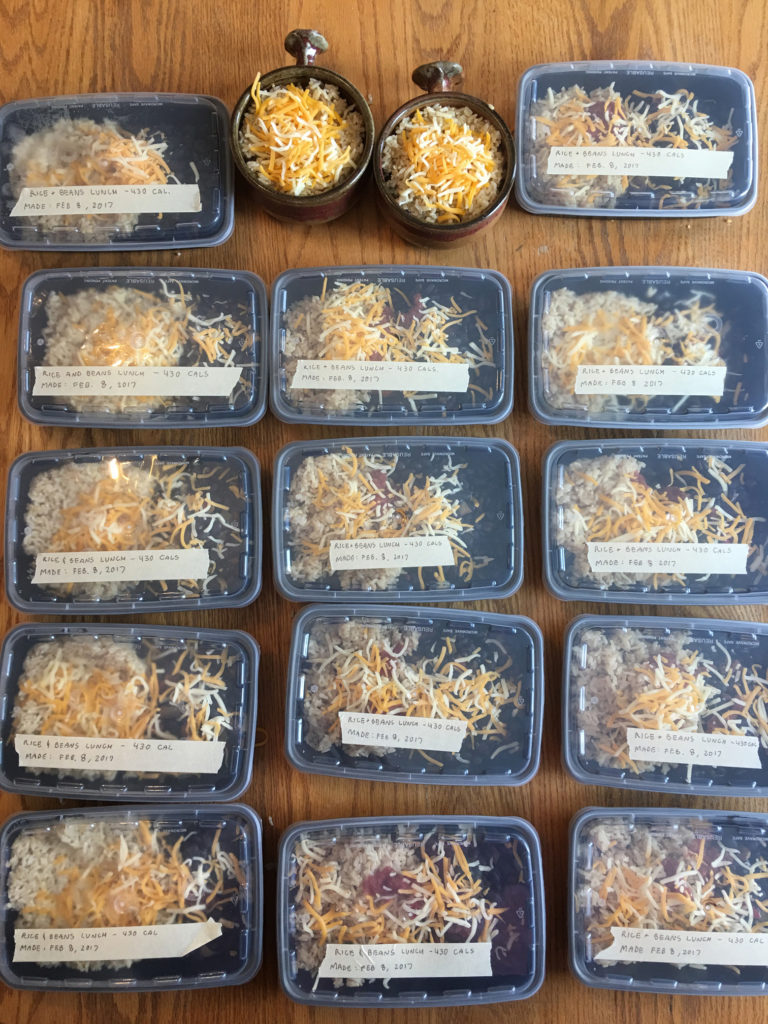 All you have to do now is clean up, and almost everything can go straight in the dishwasher!

At my local Fareway, I was able to buy two pounds of dry black beans for $2.58, two pounds of dry long grain brown rice for $1.29, and a bag of flash-frozen onion and pepper mix for $1.29. I also used seasoning that I already had on hand. Thus, the core of the meal – black beans and rice with seasonings – cost about $5.20. That’s a cost of 32.5 cents per meal.

Cheese varies in price. I was able to get enough shredded cheese in a bulk purchase to cover adding 1/4 cup cheese to each recipe for $2.99, plus a jar of salsa for $1.99. This added another $4.98 to the meal. So, even with adding cheese and salsa to the meal, the total cost for the food was about $10.18, or a little less than 64 cents per meal.

Naturally, you have to include a few supplies. I used maybe 1/20th of a roll of masking tape, which might add a quarter to the cost. I did need the reusable containers, which can be used a lot of times, but still do add some initial cost.

Still, with all of that, it’s very reasonable to say that the cost of this is below $0.70 per meal for a very filling and pretty healthy lunch that you can just pop in the microwave for a few minutes.

Compare this meal to buying anything similar at the store and you’re probably paying somewhere around $3-4 for it. If you figure that it’s $3.50 and that your meal prep strategy is costing you only $0.70, that means you’re saving $2.80 per meal, times 16 meals, making a savings of $44.80.

Considering I was able to do all of the work, from buying the ingredients to cooking everything to preparing and labeling the meals to cleanup and putting everything away in about two hours, that means I “made” about $22 an hour tax free. On top of that, I now have a great deal of convenience – whenever I want a meal, I just walk to the freezer, grab one of these, and pop it in the microwave for about three minutes and I have a very, very filling lunch. It’s likely that I’ll recoup some of the time invested while I eat the meals, so the rate is actually even better than that.

This is a very simple example of a “meal prep” plan, but all such plans follow the same structure. You make a bunch of copies of the same meal and prepare them to the point that they can just be microwaved when you actually want to eat them. Because you’re duplicating most of the work all at once, the time per meal is surprisingly low (in the example above, I’m effectively spending about 7.5 minutes per lunch on prep work, and I could have been more efficient than that), and because it’s all ingredients you cook at home, the cost is surprisingly low, too.

You can prepare almost any meal you can imagine this way. You can make pasta lunches, burritos, stews, salads… almost anything you can think of. I’m just a “rice and beans” guy, so I really like these rice and bean lunches.

I’m a huge fan of these meals, not just from a cost-saving standpoint (though that’s huge), but from a convenience standpoint, too. Hopefully, this really simple example will help you try it out, and once you do it the first time, you’ll want to do it again and again and again.

Loading Disqus Comments ...
Financial
TOOLBOX
Drowning in credit card debt?
Try a Balance Transfer Card
Is your money making money?
Choose a High-Yield Savings Account
Tired of huge interest payments?
Consider Debt Consolidation
Latest from Trent
How to Prepare for a Potential Economic Recession
How to Start Building an Emergency Fund
How to Adjust to Work-From-Home Life
Read more from Trent
Featured on: