Meet our new automobile, a 2004 Honda Pilot, which we purchased as a replacement for our ailing, rusty 1997 Ford F-150 pickup: 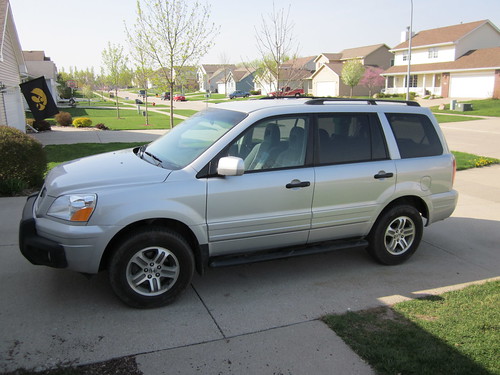 We purchased it a few weeks ago, paying cash, while simultaneously selling off our truck. Perhaps most interestingly of all, we found the vehicle on Craigslist, bought it locally, and got a very good deal on pretty much the exact vehicle we wanted.

Why Did We Buy?

Our 1997 Ford F-150 was approaching 200,000 miles and was having quite a few issues, including some significant rusting, engine problems, starter problems, a damaged flywheel, and a few other things going on with it. Not only that, we had a third child on the way, so we knew that we would need at least one vehicle that would comfortably seat all five members of our family, as neither of our vehicles did this really well.

Our primary buying concerns were space and reliability. We wanted a model that had a track record of reliability that also afforded the space for three children at a minimum (and perhaps one or two more).

Deciding What to Buy

We started by looking at Consumer Reports, J.D. Power, and other consumer publications that offered survey-based ratings of both new and old models. We actually began our search in late 2008 (!) by simply collecting data on all vehicles that could seat six or more and were made between 2000 and 2009. This pretty much restricted us to vans and SUVs.

We then began to rate them based on other criteria. How reliable were they according to the survey data? What was the gas mileage like? Does the brand or the model have a history of expensive repairs?

We wound up developing a spreadsheet of various van and SUV models, which I separated into three classes – Strongly Interested, Possibly Interested, and Avoid. The “strongly interested” models (of which the Honda Pilot was one of the top entries) were ones that had a history of reliability and at least passable gas mileage. The “possibly interested” ones had a few question marks but would have been acceptable purchases. The “avoid” models were ones that just weren’t up to snuff.

We then used various pricing sites to come up with prices that we were willing to pay for the models, particularly the ones we were interested in. We did not anticipate much value for the truck – we were largely assuming we would just buy the replacement and find the best way to offload the truck, even if it meant simply throwing a sign in the window and parking it somewhere.

We then spent fifteen months looking regularly for the right vehicle. We received lots of calls from local dealerships. I test drove quite a few vehicles along the way, as did Sarah. (One lesson learned – I don’t fit well in a Dodge Grand Caravan.)

As time went on, we started to look more and more into “alternative” pathways for buying a car. I discussed the ins and outs of this with a friend of mine with some legal expertise who advised me that I’d largely be fine with direct buys as long as we researched the vehicle ourselves and had a notarized and well-worded bill of sale.

Along the way, we saved diligently for the purchase, putting more than a healthy car payment away each month so that we could pay for the right vehicle completely out of pocket when the time came. We kept this savings entirely separate from everything else and never looked at it as part of our emergency savings.

Rachel (click that link to find out more about her) showed us a local Craigslist entry for a 2004 Honda Pilot. The owners seemed to be asking a very reasonable price for the mileage and condition claimed, so my wife elected to give it a look.

My wife inspected the vehicle, test drove it, got the VIN number, and had it inspected. She reported to me that the previous owners were seeking to sell mostly because they needed to improve their monthly cash flow and debt situation – meaning, of course, that they still owed money on the car. She also reported that the vehicle was in stellar condition, as it turned out that the previous owner actually worked on automobiles for a living.

We obtained a vehicle history report for the VIN and didn’t discover any obvious red flags. We met again, where the owner expressed interest in buying my truck at the same time, in effect turning it into something of a vehicle swap with cash added to it. He wanted a vehicle for some very local commuting and, after driving it a bit and poking around under the hood and under the vehicle for a while, said he thought he could patch it up for a year or so and then he would probably sell it for parts.

I contacted a lawyer about what steps to take to ensure that this purchase would be successful. He advised us to draw up a very specific bill of sale which indicated the specifics of the sale, that we do the transaction at the bank where the owner’s loan was held, and that we get the bill of sale and a lien release both signed and notarized while there.

So that’s exactly what we did. We conducted the full transaction at the bank, handed over a check, signed the papers, and drove off on our new Pilot. We wound up paying about $1,500 under the blue book value for the vehicle. We received the title within two weeks of the sale and I paid the appropriate taxes and fees at the county offices shortly thereafter.

Absolutely. The vehicle has run wonderfully since the purchase and has met our every need. It has plenty of space in the second row of seats for our three children and enough space in the back to haul bicycles (which we’ve already done). We received a full maintenance schedule with the vehicle and figure that we’ll be due for our first significant maintenance in late summer.

In short, we’re thrilled with the purchase. Our patience and diligence paid off – we got the vehicle we wanted for a great price and we were able to just go write a check for it, easy as pie.