How I Save Money While Living in the Most Expensive City in the U.S.

I made a lot of waves with family and friends in Los Angeles (and a few online) when I announced that I was moving to Madison, Wis., last year. Some of them just didn’t understand my desire for a slower lifestyle and a more affordable city. I tried to make each and every one of them see that they were the crazy ones for not moving to the Midwest.

I did everything short of slap my friends in the face and scream, “Wake up! You could be living in an apartment that’s twice as big for half the price! In a place where people don’t cut you in line! Where Traffic is just a rock band from the ’60s!”

I was passionate about my new life, and I wanted everyone to know it. That makes it a little awkward to announce that my stint in Wisconsin lasted a grand total of six months, and I now live in the most expensive city in the country.

To condense a long backstory, some problems developed with my girlfriend, and we took some time apart. After a couple of months, we resolved our differences and got back together.

While we were split, however, my girlfriend had accepted a position at a company in San Francisco. She was going with or without me. Within a week, we were on a plane to San Francisco together.

Some people might think it’s crazy to break up with someone, get back together, and then move across the country to an insanely expensive city. That’s a debate for a different time. Maybe the doubters are right, but at this stage of my life, my love for my girlfriend is more important than all of that. Some things trump money.

That being said, l was not about to start paying $3,000 for rent and eating $20 salads every day. You can take the man out of the frugal city, but you can’t take the frugal out of the man. Here’s how I’ve managed to make moving to and living in San Francisco as affordable as possible.

We decided to fly to California instead of renting a car. A van rental would have cost hundreds of dollars in fuel alone. We instead pooled together some old Southwest gift card money from Christmas and used that to get “free” flights.

This also encouraged us to downsize and sell a lot of our things. A clutter cleanse can be tough, but you always feel better once you’re done. We earned some extra cash and we felt like a burden was lifted. It’s always nice to realize that you can pare down your items to two suitcases and really not feel like you’re missing anything. I mean, I love my electric kettle and coffee grinder as much as the next guy, but those are things I could get secondhand in a new city. Or, I could go back to heating my water on the stove. Not a big loss, in my opinion.

Because of Southwest’s two free checked bags policy, it didn’t cost us anything to bring our whole lives along with us. That’s the benefit of being able to fit all that you need into two bags.

Instead of rushing into an apartment, we were lucky enough to be able to crash with my girlfriend’s brother. Some people would scoff at the idea of sleeping on an air mattress in someone’s living room for a month and a half, but we saw an opportunity to take our time with the housing search and save a significant amount of money in the process. (Plus, you haven’t lived until you’ve woken up in the middle of the night thinking you’re being assaulted, only to realize it’s the dog jumping into your bed. Don’t knock it ‘til you try it!)

As we looked for places of our own in the country’s most expensive rental market, there was no denying it was going to set us back a pretty penny. But, there were ways to minimize the damage.

One was to realize that you can find deals when you value things other people don’t. For example: It’s cheaper to live in an older building that’s up a steep hill. We wanted rent control and we love exercise, so those factors were actually pluses for us.

The building we found has roof access, but it’s kind of dangerous because there’s no railing or banister. This also deterred some people and lowered the price. Good thing Danger is my middle name! I’m confident I’ll still be able to enjoy the amazing view without falling off.

As with any city, the bigger the place, the more expensive it is. But we’ve always thought it’s more satisfying and less stressful to make the most of a small space, so we weren’t deterred by looking at more affordable, cozier confines. 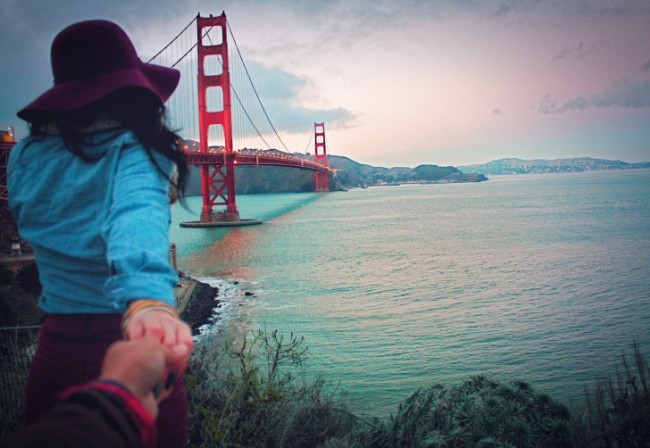 Another key way to survive in a more expensive city is to increase your income. There are many ways to make extra money, and an app-powered economy like San Francisco opens up even more opportunities for hustling moonlighters, whether it’s driving for Uber, renting out space in your house on Airbnb, or dog-sitting through Rover. But I boosted my income the old-fashioned way: I asked my employer for a raise.

I succinctly laid out how I’ve added value to the company, and I explained how my cost of living was going to increase dramatically. They granted me a generous living stipend.

Of course, I’m very lucky to work for an awesome company with an amazing boss who allows me to work remotely. But, I was able to make my own luck to a certain extent: I worked very hard for a long time, and this was the first “raise” I’d ever asked for.

I also had to take the step to actually ask, which so many of us simply don’t do. There was a period when I decided I would never broach the subject, because I convinced myself my boss would say no. I’m not big on confrontation, so this possibility scared me. But I finally decided it was worth a chance, despite what I considered low odds of success.

I’m glad I did, because, like Wayne Gretzky famously said, “You miss 100% of the shots you don’t take.”

We like to build our own beds, plus we had friends and family in the city who offered up old couches, chairs, and coffee tables. This made furnishing our new place a breeze. When you don’t need the newest, best stuff, and you’re willing to be patient, you can save some serious cash.

For the items we couldn’t get for free or at secondhand stores, we made sure to use a good rewards credit card. This lessens the sting when you realize that no amount of planning will prevent at least one sizeable bill at the store for things like bathroom supplies and that initial food run.

San Francisco is a very bike-friendly city. Sure, you might feel like puking after your first climb up a hill so steep you wonder how the cars can even park perpendicular to the curb without toppling over — but hey, no need for a gym membership.

I’ve been using a friend’s bike while I search for a cheap used one on Craigslist. My girlfriend is able to walk to work. This means we could sell our car and put that money toward rent. With me working from home and her workplace just around the corner, we don’t even need to spend anything on public transportation.

It’s not always feasible to find employment close to where you live (or to live near your workplace), but if you can, the savings are tremendous. Plus you get more of the most valuable of all resources: time.

So far, I’ve found that entertainment options in the Bay Area might be slightly more expensive than other places I’ve lived, but not exorbitantly so. Maybe that’s because I tend to naturally seek out the free stuff to do. Seeing as this city has perfect weather, myriad parks, museums, hikes, beaches, festivals, and performances, I’m pretty much covered when it comes to cheap activities.

I’ve also been taking advantage of a distinctly Silicon Valley perk: Tech company happy hours. I have a friend who works at a company that does something inscrutable involving apps and the cloud. It must be lucrative, or have the potential to be, because the company has raised hundreds of millions of dollars.

I got to see the office, which resembles something a set designer would create for a movie featuring a fancy office — except the director would take one look at it and say, “Nope, this is too opulent. No one will buy that this is a real office. Chairs straight out of the Ethan Allen catalog, 360-degree views of the bay, and a kitchen so gleaming, well-stocked, and enormous that it looks plucked from a Cooking Channel show? Are those free Justin’s Peanut Butter cups?! No one will ever believe this is a real office.”

The money they don’t spend on their Versailles of an office and high employee salaries goes toward monthly company happy hours. They rent out a swanky bar downtown and provide free food and top-shelf drinks. Plus, they encourage employees to bring friends. If you can become one of these friends, a world of free nights out becomes a reality. Plus “dressing up” for these events just means finding any old buttoned-down shirt to throw on. That’s as formal as the CEO gets.

While this city will never be as affordable as Madison, it also doesn’t have to completely derail my savings goals. Plus, my girlfriend and I are both more motivated than ever to pick up side hustles and freelance gigs.

I hope to continue to share my experiences as I learn new and various ways to save while surrounded by million-dollar homes, fancy restaurants, and tech billionaires. If you have advice or tips for me, they would be much appreciated!