Set Your Refrigerator to the Warmest Setting (26/365)

In other words, keeping your refrigerator’s internal temperature at about 39 F will keep your food safe while minimizing your energy costs.

Simple, right? Well, not quite so simple. 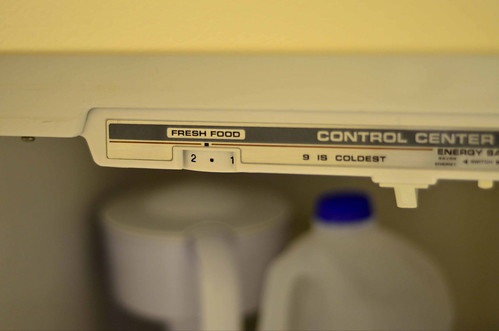 Your refrigerator is one of the biggest power guzzlers in your house. Over the course of a year, a modern refrigerator sucks down about 350 kWh of energy. That adds up to about $50. With a few simple one-time changes taking just a few minutes, though, you can cut that by about 20%, saving you $10 a year for as long as you own the fridge.

First of all, most refrigerators have a terrible internal dial that doesn’t indicate actual temperatures. I loathe this design “feature.” It doesn’t tell you a thing about the actual internal temperature of your fridge. It merely compares it to other settings.

The simple solution? Get an inexpensive thermometer and stick it in your fridge. You can get a small digital thermometer at your local hardware store for a pittance. Just tape it somewhere to the inside of your refrigerator. I just rolled up a bit of duct tape and stuck it to the back of one for placement inside of the refrigerator.

It’s important to remember that the temperature isn’t an exact thing. A refrigerator works just like your home. It tries to keep the temperature within a degree or so of the ideal temperature. This is why you should stop adjusting the temperature dial for a while if you observe a temperature around 38.5 or 39 degrees, as this may be a “low” temperature, a “high” temperature, or an average one. Do some observations over time and see what the average is.

Also, pay attention to where the fan is in your refrigerator. The air coming in there is going to be cold air, so the items near it are going to be colder than items elsewhere in the refrigerator. We generally keep items that we worry the most about spoiling close to the fan (items such as milk and eggs) and other items further away. I placed the temperature gauge on the other side of the refrigerator interior from the fan to try to get more of an ambient temperature. Also, never block the fan. Always make sure the fan can blow cold air into the interior of your refrigerator. If you block it, you’ll have one frozen item and a bunch of warm items in your fridge.

What about the freezer? You want your freezer to be low enough so that temperature variation does not allow anything to melt in the freezer. I suggest keeping the freezer at a temperature around 5 F – and a bit lower than that if your freezer is jam-packed with stuff, blocking the air flow. You can check this with a thermometer taped to the side away from the fan, just like with the refrigerator.

Another useful tactic is to thaw frozen foods in the fridge instead of on the counter. As frozen foods thaw, they cool the air around them. This is a good thing in a refrigerator that you want to keep cool internally. It’s a bad thing most of the time outside of the refrigerator, as it’s not going to provide a significant enough effect to keep your air conditioner from running any significant amount and it’s going to work in a small way against your furnace.

Once the temperature is set correctly on your refrigerator and freezer, and you’re using the device sensibly (not blocking the air flow, thawing foods in the refrigerator, etc.), your refrigerator is going to use less energy. It’s also not going to have to work as hard, extending its lifespan. Both of these save you money, as your monthly energy bill is reduced and the time until your next refrigerator replacement is extended.